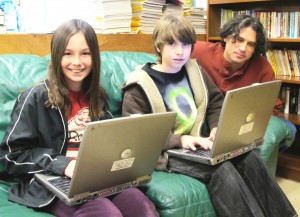 GUFS challenges students to write a novel in 30-days

This past November, Garrison School English teacher Ian Berger posed a challenge to his students: join him in starting and finishing a novel during National Novel Writing Month (NaNoWriMo). Participants begin writing on Nov. 1 with a goal of finishing a 50,000-word novel by Nov. 30.  Because of the short time-frame, quantity is the primary objective.“The [writing] challenge has a wonderful way of opening up your imagination and unleashing creativity,” says NaNoWriMo Founder and Executive Director Chris Baty. “When you write for quantity instead of quality, you end up getting both.”

Mr. Berger challenged his 6th-grade students to write 25,000-word novels and his 7th– 8th-graders to write 30,000-word novels.  Though the challenge was not an official part of the curriculum, 12 students responded.  Two of the volunteers, 7th grader Finn Waldron and 6th grader Hattie Garner-LeFavour, each wrote over 30,000 words and finished their novels by the Nov. 30 deadline.

Waldron’s novel is an “alternate univerw”‚¬ science fiction story set on Earth, in 1920. In it, well-meaning scientists from the more technologically advanced and peaceful universe develop a portal to the other universe and try to bring peace to its nations.  They make robots programmed to achieve this goal and send them through the portal, but the plan backfires. Without giving too much away, a reader can say that the rest of the story is action-packed and full of suspense. “It was hard to hit the goal of 30,000 words. I had to write every day whether it was a lot or a little,”Finn explained. “While I was writing this story, I thought about other ideas I would like to write about.”

LeFavour’s novel also has a science fiction concept.  The story is about a man who runs a “school” that floats in the air.  Students at the school grow suspicious of him and his actions only to find out that the building is not really a school at all.  The man has been sending brainwaves into people’s minds to disguise it as a school.  The students find an unlikely ally in the man’s bossy daughter who joins forces with them. “This isn’t the usual type of story I write.  I am most interested in writing children’s books,” said Hattie. “I finished the novel but it still needs a lot of work.  I’m planning to finish it.”

Berger, an author in his own right, also participated in the challenge. “I wanted to show a teacher not only ready and talking about novels, but also creating them,” he said. His was a modern retelling of Shakespeare’s Much Ado About Nothing. Berger transports the action from Renaissance Sicily to a surf camp in modern day Florida. In order to make his goal of 50,000 words, Berger had to write at 4:30 a.m. as well as during his lunch hour and evenings. “I got a little behind the night my son broke his arm, but I eventually caught up,” Berger said. “Writing 30,000 words in a month is a tremendous achievement for anyone.  I am very proud of Hattie and Finn and all of the students who took on the National Novel Writing Month challenge.”
Photo courtesy of GUFS