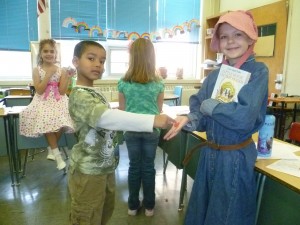 Wax figure comes to life at the "press" of a button

Last month, Kathy Moscati’s and Leslie D’Onofrio’s third grade classes at the Garrison School celebrated Women in History Month by staging a wax museum of famous women for the younger grades.  To prepare for the big day, students first chose a famous woman, researched her life and prepared a speech about their subject.  “It is really important for our students to study famous women of history,” said Mrs. Moscati. “The students did a great job selecting fascinating, intelligent women and everyone learns something new from this special program.”
Research completed, the students dressed up in costume and set up the wax museum.  In some cases, the boys dressed as male counterparts of the women, such as a husband, brother or son, to present the life of the famous woman of their choice. Each pretended to be a wax statue and stood still with a button painted on one hand until a younger student stopped by and pressed the button.  Once their button was pressed, the third grader came to life in character and recited the biographical information about them. “I think the children enjoy the interaction with the other classes,” said Mrs. D’Onofrio.  “They were really excited to share what they learned with the younger students and each other.”
“I chose Joan of Arc because I wanted to pick a warrior,” said Connor O’Reilly, Garrison third grader.  “The most interesting thing I learned about her was that the King handed her over to the English.  I don’t think what happened to her was fair.”
Megan Horan chose to research Laura Ingalls Wilder.  “I’ve read a couple of her books and I really like her,” she said.  “She had a very interesting life.”
Conor McMahon wrote his speech about Kateri Tekawitha, a Mohawk woman and said, “I chose her because she’s a Mohawk Indian and that is one of my favorite tribes.  She had a very hard life.  The other Indians didn’t like her because of her religion.”
Photo courtesy of GUFS