31 returnees could spell a much-improved season

In  team sports, amateur or professional, whether it’s baseball, hockey, basketball or soccer, teams go through a cumulative cycle as they build a roster they hope will bring home a championship.  Football, including the Haldane Blue Devils, is no different. In pro football, the key factor on the road to success is usually a series of very productive draft choices. In high school, it is often about returnees – including a crop of good, experienced, senior student athletes. Of the 32 players on last year’s roster, 31 are back for the 2011 season, including all 11 starters on offense and 10 of the 11 projected starters on defense.

Haldane head football coach Jeff Sniffen is cautiously optimistic about the upcoming season. If returnees and an experienced roster really are the keys, perhaps the caution he expresses is less than forthright, but based on an old and very wise adage in sports – never say anything that will motivate the opposing team. 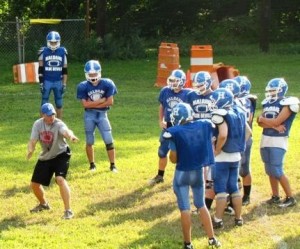 The Blue Devils’ season begins in September, but the preparation  and the sweat – started several months ago. The hard work began in November with weightlifting four days a week, running in the ice and snow, and after the snow-melt, getting outside to rep out some of our plays Sniffen said. In late spring, the Haldane squad participated in a 7-on-7 tournament in Arlington, N.Y., winning four of five games. The kids really worked hard – their hard work during the off-season paid off, Sniffen said.

Summer brought more conditioning, training, and hitting the books  although in this case it was the team playbook and practicing the plays it contains.‚ That portion of the preseason came to an end with the Blue devils taking part in a speed clinic hosted by Ultimate Advantage Fitness. Traditional two-a-day practices began in mid-August. The team also attended a Team USA Sports Camp in Port Jervis. It provided us with an environment solely devoted towards football and team bonding, said Sniffen. 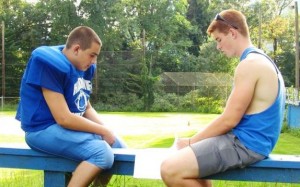 Getting down to business

September 2 will see the Blue Devils go head to head with two other local teams in a scrimmage session at Putnam Valley High School.  The next day the Blue Devils take to their home field for the Blue and White intra-squad game. The Haldane season opener is at home on Saturday, Sept. 10 against Albertus Magnus High School from Bardonia, N.Y., located just north of West Nyack. The season is short,  just seven games, four of which will be played on the road.

The past two seasons have not been kind to Haldane football after the successful 2008 season..[That] was a good year, but ended in a loss to Class D powerhouse Tuckahoe.  The [last] two years were very difficult only one win, Sniffen said. Lack of interest in the upper classes, youthful inexperience, difficult schedules, and countless injuries contributed to those two bleak seasons. But strength can come from adversity and the players’ attitude going into this season is certainly upbeat. We’re a lot more confident this year. There’s more leadership. Last year we had only one senior  this year there are 16 or 17, said Elias Lopez, starting quarterback and one of three team captains. 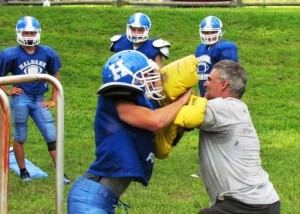 The beatings we took last year were well absorbed by a young team that returns 30 of 31 from the roster,” Sniffen said.  That experience could pay dividends with the team running a similar defensive system this year led by former Irvington High School head coach, Pat Costabile.  They will also employ a similar offense; one that Sniffen said will make good use of the team’s strengths. Scheduling will also be more favorable. Section 1 has changed providing us with a schedule that should be more manageable than what we faced in the past two years.  It’s our goal to return to the Section Championship game, probably against our rival and reigning state champion Tuckahoe, and to hoist the championship plaque come November, Sniffen said. 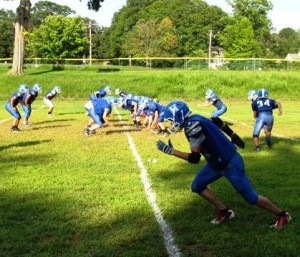 While he’s not giving away any secrets, Sniffen is direct in outlining the type of offense and defensive that opposing teams will face when they meet Haldane. The offense will be the spread pistola true balance between run and pass in an up tempo fashion that would exploit the defenses deficiencies. And the defense? A 50 defense (five defensive linemen and two linebackers)we’ll attack in an aggressive manner that puts pressure on the quarterback. Sniffen is just as straight forward in stating what he expects from his players. One thing I demand – accountability – which must be an intrinsic quality.  I will do my best to provide an environment that holds them accountable; they must do their best to fulfill their responsibilities for the betterment of themselves, but most importantly, for the betterment of the team.