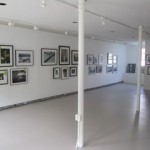 Gallery being readied for the opening of the exhibit (Photo by A. Rooney)

There are no evident trends in photography, judging by the varied entries on display at Garrison Art Center’s third edition of PHOTOcentric, a juried show, with submissions open to the public at large.  Categories defined the classification this year, but within these divisions, which included landscape, portrait, architecture and a catch-all for “open”, there are subjects as dissimilar as a still life of olives and chestnuts to an image of “nails, screws and nuts, poignant debris from a hurricane to feet murkily extended off a boat and thus Dangling Starboard and the gloriously creased skin of the aged.  Black and white, color, digital, collaged, pristine, full of effects, staged, impromptu all are represented and mixed together.

Open to anyone over the age of 18, photographers, professional and amateur alike are invited to submit up to five images digitally.  These are then sorted into categories.  This year saw 1,254 images submitted (the most ever), whittled by the jurors to 65 finalists, from which awards were selected.  This year the two judges, Larry Fink, a professional photographer of 45 years who has had one man shows at MoMA, the Whitney Museum of American Art, the San Francisco Museum of Art and abroad, and Stephen Perloff, founder and editor of the Photo Review, worked together to choose, discussing each submission and making a joint decision.  In other years, categories have been divided with each judge having a particular area of responsibility; the judges themselves decide which way to work. Each category resulted in first, second and third place winners, and an eventual Best in Show, this year awarded to Sasha Phyars-Burgess, who depicted her Trinidadian grandmother receiving a haircut. This year, the judges also decided to give a special award for humor, as well.  Garrison Art Center Director Carinda Swann called the submissions “very strong this year.  We had international entrants, people who have submitted in previous years – some get accepted one year and not the next – and lots of new photographers as well.” This year cash awards were provided to the winners for the first time.

Once photographers have made the initial cut, they are then asked to send a high-resolution image for the catalogue which accompanies the exhibit, and to ship the actual work, professionally framed, to the Art Center.  Reflecting the mixture of local, regional and out of the area artists represented, about two-thirds of the works are shipped, with the balance brought in personally. Swann says that due to the quality of online reproduction now, there are few “in person” surprises when the work actually arrives, although sometimes the size of the image is unanticipated.  All works on display are for sale, with prices determined by each artist. 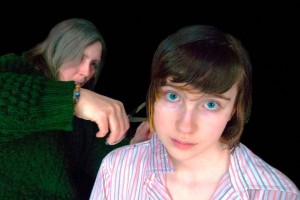 Mike Enright, one of about five or six local photographers who were included amongst the finalists, has submitted works to PHOTOCentric in each of its three years.  His entry, a large work in color, dominated by the eyes of its subject, also depicted a haircut, but could not be more different from the Best in Show image.  Enright has taught Photoshop, along with Flash, web design and other related subjects for the past twenty or so years, currently at Bronx Community College.  Over the past year he has “done a lot of work with masking.  I’ve begun to work with photos I had given up on before, changing the way they look by adding subtle effects to a masked background; my goal is to make the Photoshop invisible. In this image there was a lot of ‘junky stuff’ visible in the living room, and through the masking I was able to focus on the central image. I’ve also been over-saturating colors in lot of my work recently; it makes it more painterly, but not in that one.”  A selection of the images Enright sent into the PHOTOentric competition can be seen on his website. Other local photographers represented as finalists include Matthew Burstein, Asha Fuller, Will Maria and Jane Soodalter. Professional Philipstown photographers Cali Gorevic and Lucilla Tortora established the awards in 2009 and have served as co-Chairs ever since. 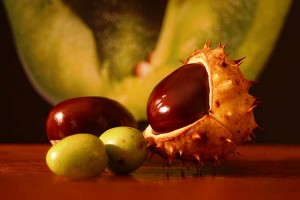 In his introduction to the catalogue, Perloff addresses the viewers,

lest you think jurors bring their own outrageous biases to the jurying process, I have found most jurors – and I myself try to be – quite inclusive.  Whether watching a juror choose from the images submitted to our show, or working with another juror, or several others, we always tend to agree on 80 to 90 percent of the images. This was indeed the case here.  Larry and I settled our few disagreements with two falls out of three. Now that was something to see! “¦ With the introduction of digital technologies, photography is in another period of dynamic revolution – Digital technology has opened the door to many kinds of photographic seeing.  In the PHOTOcentric show there are classic black-and-white images, contemporary color, and images that have been highly manipulated.  Fortunately, the early days when someone would apply a Photoshop filter to a mediocre image and call it ‘Art’have mostly passed.  At its best, as in the images here that blend photography with the keenest traditions of classical printmaking, digital technology provides a seemingly unlimited toolbox to the creative photographer.  And it gives the traditional image-maker controls well beyond what existed with film and photographic paper. With the broad range of personal expression and technological prowess in PHOTOcentric, we see why photography has been and continues to be such a vital and essential component of contemporary art. 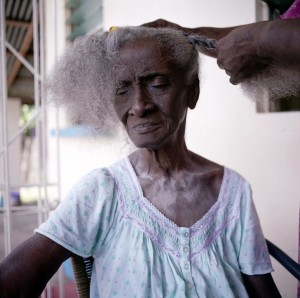 For Best-in-Show winner Sasha Phyars-Burgess, a confluence of training and happenstance came together perfectly in her transfixing image of her grandmother.  Phyars-Burgess, a recent graduate of Bard is now in the post-collegiate stage of “trying to figure out where I want to take it.” A first-time entrant, discovering the contest online, she called herself “really excited – happy, shocked to win.”  Her narrative of the photograph: “It’s my grandmother, who we call Cha Cha, who lives in Trinidad, getting her hair done – combed and braided.  I just took two pictures, back to back.  Just saw her sitting there, like I did as a child, getting her hair done.  Seeing my grandmother getting her hair done was nice – it was beautiful and sad at the same time.  Now my aunt has to do her hair; she can’t do for herself.”

The exhibition runs through Oct. 2, with a reception for the artists on Saturday, Sept. 17 from 6 to 8 p.m. A full list of the winners and all of the finalists can be found on the Art Center’s website. For more information phone 845-424-3960.