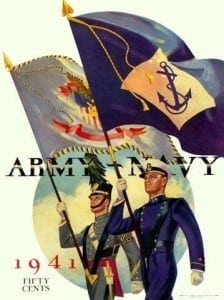 In Cold Spring: Have a brew, share the fun, support local vets

The Black Knights of the U.S. Military Academy take on the Midshipmen of the U.S. Naval Academy on Saturday at 2:30 p.m  in a football tradition that dates back to 1890. And the battle lines won’t be limited to FedEx Field in Philadelphia where the 112th contest in the historic series will be played. McGuire’s on Main is giving local residents a chance to be a part of the fun while suporting local veterans at the same time. Tommy Wills, a Navy veteran and  bartender at the popular local pub, has put together a program of good food, excellent prizes and great beverage prices that will make for a very entertaining afternoon. The fun begins at 2 p.m. with kickoff a half hour later. Organizers hope that those attending will make a $5 contribution upon arrival.

No doubt there will be many a good-natured glare flying back and forth between Navy vets like Wills and Larry Turner and their local Army counterparts such as Ben Martinez, Terry Lahey and Ed Murphy. Who will be glaring at the end of the game remains to be seen.

Navy leads the classic rivalry with a record of 55 wins against 49 losses – with 7 games having been played to a draw. The Midshipmen have won the last nine straight. With just one fewer win than Navy this season, Army’s hopes of ending that streak are running high. It promises to be a loud afternoon.

Proceeds will go to support the local VFW and American Legion.