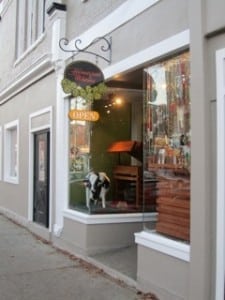 Located away from the east end and west end clusters of stores, galleries and restaurants on Beacon’s Main Street, for the past five years Homespun Foods has become its own destination for those in search of its array of Mediterranean- and Middle Eastern-influenced soups, salads, platters, and sandwiches in a homey, café-like setting, replete with an outdoor garden patio out the back for warmer weather dining.  Many Philipstowners are amongst the regulars. Now Homespun has a spin-off, Homespun @ Home, located just across the street, where many of the favorite victuals are available for take-out.  Homespun @ Home’s hours are designed to accommodate commuters and those who are seeking good-quality, healthy prepared foods for dinner or whenever one chooses to consume them.

Before the original Homespun opened, six years ago this May, owner Jessica Reisman wondered if people would come to her “mid-town” location.  At that point she had lived in Beacon for 10 years, and knew she wanted to “have something here — wasn’t sure what, exactly,” related to the food business.  Reisman is totally self-trained in “food.”  A New Yorker living in Seattle, she recalls being “in my 30s, needing to make money, so I started a small business selling cookies.  Before I knew it I was selling pastries to the espresso carts.  Then I was invited to share a bakery space and I learned on the job.” The wholesale and then retail experience she gained from years spent running the bakery (which became one of Seattle’s leading bakeries, McGraw Street Bakery), served Reisman well upon her return to her New York roots to help out her aging parents. Settling in Beacon, she commuted to the city, working for Whole Foods in Manhattan.  Reisman’s impetus for starting Homespun was simply “I felt I had one more in me.” She originally conceived of Homespun as more of a specialty food items store, with a large artisanal cheese counter, a wide selection of olives and gourmet provisions for sale, but “the café took off — the prepared foods. 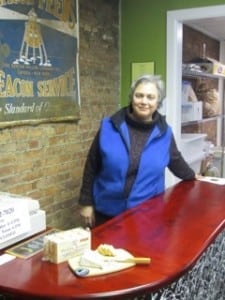 As it turned out I couldn’t have survived on the specialty foods aspect alone.”  Working in tandem with her longtime chef, Claudia Levesque, whom she dubs “a natural,”  Reisman says they have a “great relationship in what we like.”  And what they like happily coincides with what their customers expect from Homespun — there’s a consistency behind some of their most popular items, which include specialty salads such as blue cheese/pear/prosciutto; a vegetarian meatloaf; Vietnamese bahn mi sandwiches; shrimp and sweet potato cakes; and lamb moussaka, along with their daily offerings of soups — Moroccan Red Pepper and Spinach/Chickpea/Tahini are two examples served recently — which have their own fan base.  They try to use “as much as possible from local ingredients and suppliers — we’re on the local bandwagon, not totally, there but we really try,” using very little prepared foods. “We always use hormone-free products: Murray’s free-range chickens, Feather Ridge Farm eggs, Mountain Products Smokehouse nitrate-free bacon we call happy bacon.”  In years past they have “bought” an entire cow from Bittersweet Farms, and the farm has processed it for them throughout the season.  They make all of their stocks from scratch and all baking is done from scratch as well.  Homespun is also a catering service. 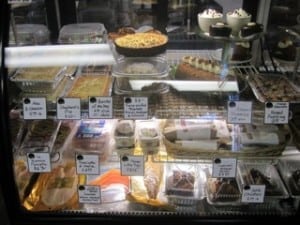 The day's offerings at Homespun @ Home

Reisman feels lucky in her timing.  Six years ago, Beacon was riding one of its periodic “slews of press coverage” and there was “such an influx of Brooklyn: young families came with a Manhattan sensibility about food, and they found me.”  Homespun has had no difficulty being “found” ever since, with locals and DIA tourists alike lining up on the weekends. Simple word of mouth, from nearby store owners and community members is how most find out about it. Reisman calls being open seven days a key, consistent aspect of Homespun’s success.  Hours change seasonally, and sometimes Reisman mixes it up, adding once-a-month dinners, eliminating weekday breakfasts, tweaking things along the way.  She is grateful for the ability to be flexible, calling the community “understanding of our need to be.” 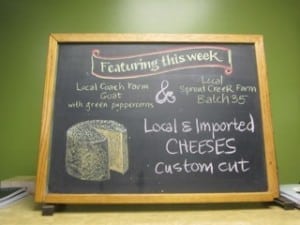 Now, in an understanding of what the community needs, Homespun @ Home has emerged.  It had long been a desire of Reisman’s partner, Chris Ancliffe, to provide meals to go for commuters and others who didn’t want and/or have time to prepare nighttime meals each evening. “We’ve always missed that market, because we closed earlier — but we have to live!” says Reisman. It is easier to do this without having to keep a whole café space open for long hours.  Merging this goal with the continued lack of cooking space issues (chef Claudia cooks on a two-burner stove…) in Homespun’s small kitchen, the idea of Homespun @ Home was conceived as a way to combine the needs of the clientele and the needs of the kitchen.  Not wanting to give up the original Homespun space, the food production has now been divvied up, with baking done at the new space and savory cooking at the old.  Homespun @ Home has hours which reflect its offerings, on weekdays they basically open when the original Homespun closes: 4 to 8 p.m. Monday through Friday, as well as from 12 to 6 p.m. on Saturdays, closed on Sunday.  In addition to a selection of prepared dinners, made in different serving sizes and offered fresh and frozen, there are soups (“a smattering of all different kinds”) in the fridge, cookie dough, lots of specialty food products, and the cheese case is now in residence at the new premises.  There are also kitchenware items for sale. In the warmer months a wide variety of salads will be available. Everything is on a take-out basis only. 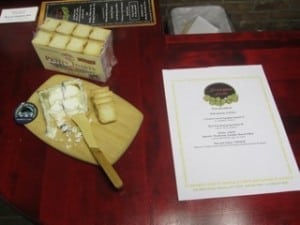 There’s a philosophy behind both Homespuns: community.  “My passion is eating and the making of food is second,” says Reisman.  “Over the years I’ve enjoyed creating environments where communities can happen.  I have a really good staff to help.  It’s been interesting to watch the patterns of people coming and going through the years.  Babies are brought in, and soon they’re peering over the counter.  Moms are here every day, and suddenly they aren’t – they’re taking those babies to activities.  Then they’re back.” Reisman welcomes input on “what people want” and she’s happy for customers to come in and tell her.  Look for her — she can inevitably be found at one Homespun, or the other.

The original Homespun is located at 232 Main Street, and Homespun at Home is across the street at 259.   Visit www.homespunfoods.com and  www.homespunathome.com for more information.