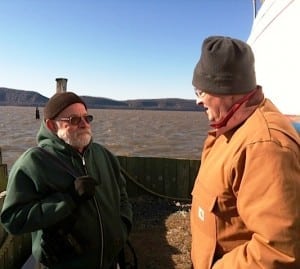 Chris Letts, (L) Hudson River Foundation and John Lipscombe, Riverkeeper, share perspective on the river in winter on the coldest morning of the season so far.

Wilderness at our doorstep

On a morning when the northern wind hurtling down river cuts through the most tightly wrapped fabric, John Lipscombe arcs his arm, as if in blessing, and declares winter the best season for contemplating the natural beauty of the Hudson.  “For me the winter is beautiful. The one overarching sentiment I have in winter is that it’s as though you go back in time. The marinas have pulled in their docks because of the potential for ice, the boats are all out of the water, a lot of the signs of mankind have retreated. I love the winter for that.  It’s kind of like going back a hundred years.”

Lipscombe, the boat captain for the environmental advocacy group Riverkeeper, directed this reporter to the lee side of a large boat mounted atop its winter mooring for shelter from the wind.  A man who loves his job, Lipscombe patrols the river for environmental threats and leads expeditions for researchers, educators, scientists, students and lawyers. He sees the river as a living organism with a more primal quality when the cold weather descends upon it.  “The river is a wonderful little view into true wilderness, it’s the wilderness right at our doorstep,” he said chuckling before offering an example of his point. In winter someone will invariably call the Riverkeeper office alarmed over a harbor seal seemingly stranded on the rocks, in need of rescue, when the seal is actually just sunning itself after a feast of slow-moving winter fish, according to Lipscombe.  “It’s an all-you- can-eat buffet for the seals if they come up river. We’re so unused to seeing the signs of wilderness in our midst, so people can get excited when they see a seal or if they see an eagle.” [SEE VIDEO]

Eagles are also on another river enthusiast’s mind this morning as we stand on a pier in an Ossining marina. “The miracle of winter for me is now, and has been for two decades, the wintering bald eagle that comes down from the Arctic Circle,” said Chris Letts, long-time educator for the Hudson River Foundation. “The river becomes a teen center [for eagles] where young adults meet, fall in love and perpetuate the species. Eagles mate for life,” said Letts. Later in the conversation Letts thought he spotted an eagle on the river, but binoculars reveal a large gull skirting the river’s surface.  “Black-back gulls can sometimes be confused with eagles. Eagles soar with flat wings and gulls with nicked wings,” he said with arms spread wide as if he would willingly be borne aloft. Letts will hold two events in the coming weeks to celebrate the eagles’ presence in the Hudson Valley.  See Hudsonriver.org.  He is equally effusive about snowy owls and fast-flying hooded mergansers (ducks) flying along the river and nesting on its banks. 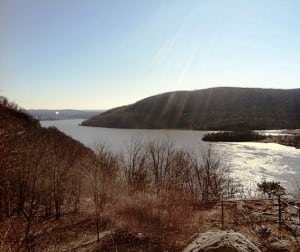 No sign of ice forming this balmy February day.

The two men, allies and friends in their protective vigilance and passion for teaching and learning about all things Hudson, eagerly share more stories, lore and remembrances of life along the river than one article can hold. Letts laughed as he recalled a decades-old tale of bears from the west bank forest scampering across the frozen river to steal the catch of fishermen with nets hung through holes in the ice. Lipscombe updated the changes in climate by telling of a bear more recently swimming across the Hudson in January.

By all accounts there is less ice in the winter river and for a shorter period with each passing decade. The northernmost area still freezes fairly regularly and requires the attention of Coast Guard ice breakers to keep the Port of Albany open to heating oil deliveries by barges from the New Jersey oil refineries. Ice formation and movement is still a potentially dangerous factor for any river activity.  But as you come south the ice is increasingly tenuous.

“People have memories of ice freezing so reliably that people drove Model-Ts across it in winter before there were bridges,” said John Cronin in a telephone interview. “My grandfather drove across at Peekskill. It was a different era.” Cronin,  the Beacon Institute Fellow at Clarkson University, also referenced a time when horse-drawn sleighs on the river, with special rubber shoes for the horses, were common sights. The horses worked in the thriving commercial ice harvesting business with workers sawing out giant blocks of ice for storage on vessels that would sail downriver when the spring melt arrived. “Hudson River ice went around the world to India. Ice was a farmers’ cash crop in winter,” said Letts.  No more. “The average water temperature has been dropping one degree Fahrenheit for four decades, said Lipscombe.

Climate change is not the only factor warming the winter water. The four power plants along the river, including the Indian Point Nuclear Plant at Buchanan, discharge billions of gallons of heated river water daily to run their cooling systems. The state Department of Environmental Conservation has cited Indian Point for “adverse impact” on aquatic life and is involved in a lengthy dispute to force the plant to adopt a system that can re-circulate water rather than return it to the river. 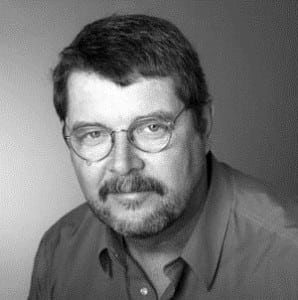 Nevertheless, ice can still form quickly along the mid-section of the river. Cronin, a long-time river activist and teacher, who will teach a for-credit course this summer on environmental policy and clean water at the new River University, a joint project of the Institute, Clarkson University and the Hudson River Sloop Clearwater, points to the Highlands area, especially the narrow World’s End just below Cold Spring, as particularly interesting for ice formation. Drift ice, snow and slush can bind under the right circumstances in the bottleneck, resulting in a hard freeze amidst the constantly moving river, explained Cronin. He said people should take the time to observe the special phenomenon.

River ice remains a danger. The stonewalls around lighthouses or bricks placed along beaches and near docks, offer historic testimony about the potential ravages sharp-edged ice floes in moving water presented in years past, but not so much today. “Ice drags soil away from banks and traps dead material in streams,” said Cronin although there is no clear understanding of what these and other ice factors ultimately mean ecologically. For all its potential for destruction and disruption, Letts described the sound of ice colliding with ice as “wonderful, sometimes it’s the 1812 Overture” (Tchaikovsky). 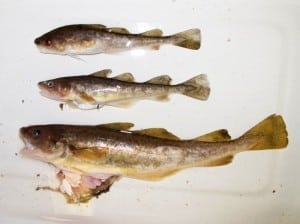 Some Fish Thrive
Atlantic tomcod prefer the Hudson in winter to the ocean, attracted to the varying salt and fresh water mixture. According to Cronin, adult tomcod are quite active from the saltier lower to mid-Hudson regions, while younger tomcod like to travel further up river to fresher water where they spawn a new generation before the families reunite for the migration back to the ocean in the warmer months. Last year, according to National Geographic, a study, led by an NYU School of Medicine scientist, concluded that the tomcod had developed a genetic immunity to the infamous industrial polychlorinated biphenyls (PCBs) that once threatened the life of the Hudson and other waterways. The tomcod are seen as in the vanguard of species evolving protective armor against environmental threats.

Cronin also recalled research, done when environmentalists opposed the now almost forgotten Westway highway project in Manhattan in the 1970s, demonstrating that striped bass had found a winter home in the river while other species sought warmer waters. Lipscombe described the bass existentially as living “within a degree or two of death” when the water temperature approaches 32 degrees F. but still apparently loving it. The bass tend to move northward in the river as the salt content increases with the upward tidal flow combined with the reduction of fresh water from the more frozen northern sources. Salt water’s freezing point is much lower than fresh. Letts speculated about the bass swimming very slowly in the chilled water and seeking the sun in the shallows of low tide. He admitted much about them is not known. “But then it’s hard for us to converse with them, we don’t do a good job of that,” he said with a rueful tone. 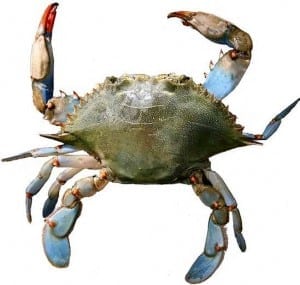 Blue crab, an abundant river species, are also on the move in winter, but they migrate from the river to the Lower New York Bay to burrow under the warmer mud. Letts likens them to himself getting cozy on a cold night under the quilt his wife made. “You can see their little eyes peering out from under the mud,” he chuckled. Lipscombe described the crab “returning upriver a bit at a time as the temperature rises.” Rather than just swimming up on their own, “The crab ride the flood tide, propelling themselves with their hind legs, letting the current ease them north. They are very efficient creatures,” he said.

Lipscombe emphasized that as much we are interested in the river before our eyes, “If we care about the blue crab or the striped bass, [or other species] it’s not just the river near us or the lower river or New York harbor, it’s the whole system, it’s the whole eastern seaboard from Maine to Florida.”

“Compared to the other seasons there is a lot of mystery about the Hudson in winter.  Historically it is the least studied. We don’t know as much as we should ecologically,” said Cronin. He pointed out research vessels generally cannot get out in winter. “Almost impossible to know what’s really going on without sampling,” concurred Letts. “We can’t really tell what’s going on down there,” said Letts. So when he teaches classes along the riverbank Letts deploys a beach seine, a net device used by scientists to collect whatever might be in the water and he uses those items to make observations on present conditions as well as historic developments.  You can see Letts teaching a class on this link  [CLICK HERE TO SEE YOUTUBE VIDEO].

For river aficionados, however, the mystery is always bathed in beauty. Letts spoke of the simple joy of “early sunrises and sunsets and the full moon rising on a clear night from behind the Palisades.” For Lipscombe it’s the river’s winter grey color that draws him hither. “The color turns more dramatically in February than at any other time of year.” He theorizes that the absence of chlorophyll from algae and other organisms allows the sun to back light sediment suspended in the water, creating the grey patina.  “The hills and the trees are grey. On a cloudy day it’s grey on grey on grey — it’s very beautiful.”