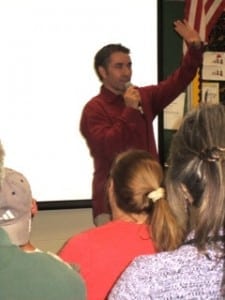 Matt Bellace, during his presentation

Haldane Guest speaker Dr. Matt Bellace focused on “How To Get High Naturally”

Aiming to deliver a supportive message to middle and high school students and their parents about teenage substance abuse, the Haldane School Foundation, Haldane PTA and Haldane administration banded together to present a full day’s worth of programs conducted by Matt Bellace, Ph.D., a motivational speaker, stand-up comedian, and, oh yes, a neuropsychologist to boot.

Bellace, whose overall aim is to avoid the “sturm and drang” of scare tactics and instead present his How To Get High Naturally theme sugar-coated in humor, but with a serious message underneath, conducted separate workshops with middle-schoolers and then high-schoolers during the day, and then made an evening presentation geared towards parents who made it nearly a full house at Haldane’s Music Room.

Bellace’s message is: “Young people need to feel empowered in their schools and communities. It is not enough to ask them to stay away from drugs and alcohol, we need to show them there are positive things they can do for themselves and others. They must all be leaders in their lives.”  He conveys this message through anecdotal humor, describing his own family and social history, as well as through a few comedic exercises involving members of the audience.

Author of a book entitled A Better High, Bellace frames his presentation around the acronym L.E.A.D., each letter an emblem of a way to chart a course away from chemical highs.  The letters stand for the following:

Lean on Healthy People for Support.  Saying that the number one predictor of adolescents trying alcohol or drugs is “the friends they surround themselves with,” Bellace urged parents to learn communication skills which allow them to “practice empathy, good listening: stop what you’re doing, be non-judgmental.  Identify their thoughts and feelings instead of dismissing them; remove emotion…don’t attack, describe your anger in words instead…use acceptance, not agreement…It’s a confusing world out there — its’ blurred, grey.”  A slide he displayed read “ur angry = ur the jerk.”

Express Yourself in a Healthy Way. Bellace urged parents to help their children find coping mechanisms, suggesting music as one example, “On their iPODs they can create playlists geared toward emotion of any kind.” Bellace feels coming up with these coping mechanisms is essential in helping kids avoid coping through substance use.  He described the implications of teens and alcohol usage as severe, “If someone takes their first drink of alcohol at 14 they have a 45 percent chance of developing alcohol problems; if they can wait until they are 21, that dips to 10 percent.”  He then described how teenage brain development is not fully formed, thus alcohol affects teenage brains differently than adult brains, with lower blood flow affecting memory and personality through the shrinkage of the hippocampus and the amygdala.  Other results are a decreasing I.Q., as the brain’s processing speed slows.

Achieve Natural Highs. Emphasizing that he was “not here to fear-monger,” Bellace threw out examples of natural highs, including running with its release of anandamides, which elevate the mood and remove pain; taking positive life risks — as it is the inclination of teenagers to take risks — such as surfing; ‘loving’ in all its forms, which releases oxytocin; and laughing, which releases dopamine.  Audience laughter was induced by a fun exercise in deception with three willing parent volunteers.  Bellace stated that laughter “might not be more intense high than cocaine, but it’s a better high.”

Don’t Be Afraid to Take A Stand. Bellace guided the parents towards the difference between tough love and setting boundaries, and urged them to do things like “eat dinner together; call ahead to parties: [to ask about supervision]; and above all “don’t host drinking parties.  Teens don’t drink safely, they’re drinking to get drunk, and parents can go to jail.”  Bellace also advised parents to talk about family history of drug and alcohol abuse, and not hide it away.  He also suggested using natural events to bring the conversation round to drugs, for example using a news story about a celebrity and drugs as a lead-in to a more personal discussion of the subject.  Most of all he stressed “get help when you need it, and model natural highs at home.”

Haldane ninth-grader Wylie McDonald found the presentation very worthwhile, saying, “Mr. Bellace presented the dangers of drugs and alcohol in a very interesting and humorous way, making it easy to understand the influences of everyday choices on one’s life.”

A few questions from the audience followed the presentation:

Q: What about peer pressure — the ‘my friends have started to drink’?
A. For some kids, that will mean finding a new social group.  Pursue other activities and the activities will lead you to other social groups. I think the biggest pressures come not from peers but from the media, music, film etc.  That’s peer pressure too.

Q.  When you speak with adults, do you ever get into the anatomy of a bad decision?  A lot of things are harder than immediate gratification.  If I’m presented with coffee or fruit stalls, I never go to the fruit guy.  That’s the point where we trip up.
A. Yes, there is more energy expended for the natural high than the chemical high.  It’s delayed gratification, and we need to encourage fun not just with the end product, but with the process.  Drugs are made to be effective, unlike the natural high activities, but we have to try to make them value things over the party scene.

Q. Should we tell our kids to never drink or do drugs?
A. Ultimately encourage them to respect their brain, make choices on their own, but don’t give them directives.  If they want to do drink and drugs, they will.  It’s how can we incentivize the healthier lifestyle.  Most kids using pot regularly are doing so as a coping mechanism for feelings underneath.  Encourage them to find a healthier way to cope with things. 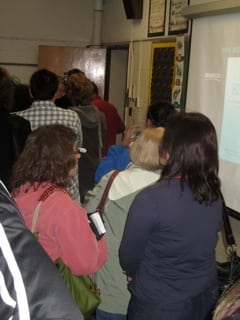 The line of book-buyers after the presentation

Bellace has a Ph.D. in clinical neuropsychology from Drexel University, and was a recurring comedian on truTV’s The Smoking Gun Presents. In his talk he referred to his days as a Bucknell University sophomore, when he founded a grassroots prevention group called C.A.L.V.I.N. & H.O.B.B.E.S. (Creating A Lively Ingenious New Habit Of Being (at) Bucknell (and) Enjoying Sobriety). In 2005, he received a Ph.D. in Clinical Psychology from Drexel University. His subspecialty is child and adolescent neuropsychology, the study of the developing brain and behavior. He completed his internship at The Mount Sinai Medical Center in New York, working with patients on the Traumatic Brain Injury and Spinal Cord Injury units. Bellace’s dissertation topic was emotional memory.

The idea for the presentation was put forward for consideration by Scott Many, Haldane’s school social worker.
Photos by A.Rooney