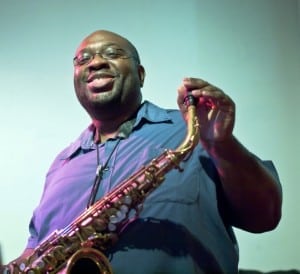 The Chapel of Our Lady Restoration is proud to continue its Evening Music Series with one of the most remarkable new talents in contemporary jazz, alto saxophonist and composer Darius Jones, leading a trio that will perform a the Chapel on May 12 at 7:30 p.m. Joining Jones will be Sean Conly on bass and Jason Nazary on drums. Admission to this event will be $15 and $10 for students and seniors.

Ever since I first heard Darius, I knew he was the real deal and a true recipient of the jazz tradition with the possibility of taking the language forward—in other words a serious, serious talent. It is an honor for me to be a part of the future by stepping out of my comfort zone and playing with a new, emergent virtuoso and finding out we have a lot in common. He is a real musical thinker—he does not let jazz licks get in the way of real expression.
~Pianist/composer Matthew Shipp

It is an especially accurate description of Jones’ impact on the jazz scene both in New York and internationally within a very short period of time. He has recently released the trio album Big Gurl (Smell My Dream) for his label AUM Fidelity, which presents the next volume and character of Jones’ ongoing Man’ish Boy epic. Big Gurl moves the story forward and takes inspiration from his years of study, experimentation and self-discovery at university in Richmond, VA, where he began the search for his own voice. A scintillating jazz saxophone trio love letter to underground hip-hop, soul, gospel, jazz, blues, rock and all things funky Big Gurl features Jones’ long-standing trio with bassist Adam Lane and drummer Jason Nazary which he formed shortly after his arrival in NYC — for this performance at the Chapel, bassist Sean Conly will replace Lane in the group.

Jones joined the New York music community in 2005, after living and studying in Richmond, VA. He was signed to AUM Fidelity records in February of 2009 and released his debut album as a leader, Man’ish Boy (A Raw and Beautiful Thing), in October of that year. The record features his trio with Rakalam Bob Moses and Cooper-Moore, and reflects his early childhood growing up in the South. The album was a clear favorite in the media, garnering overwhelming praise from the New York Times, Jazz Times, All About Jazz, Time Out New York, the Boston Globe, Pop Dose, Signal to Noise, The Wire, Paris Transatlantic, The Village Voice, and others.

Jones graduated from Virginia Commonwealth University with a Bachelors in Jazz Studies in 2003, earning a Master’s Degree in Jazz Performance/Composition from New York University in 2008. His repertoire includes compositions and performances in electro-acoustic music, chamber ensembles, contemporary and avant-garde jazz groups, modern dance performances, and multi-media events. He was awarded the Van Lier Fellowship by Roulette in 2008, which he used to launch his chamber ensemble, Elizabeth-Caroline Unit, a project dedicated to new works for voice. Jones was a two-time nominee for Up and Coming Artist in 2009 and 2010 from the Jazz Journalists Association and was one of Jazz Times’ Debut Artists of the Year for 2009.

Jason Nazary is a young drummer/composer from Atlanta, GA. Moving to New York in 2005, he has already begun to make an impact on the creative music scene. His raw approach to improvisation blends a variety of influences from Tony Williams to J Dilla to Morton Feldman to Lightning Bolt. Past mentors include Bob Moses, Steve Lacy, George Garzone, Dave Douglas, and Danilo Perez.  Jason plays in a variety of different projects, most notably free jazz/punk/soul band Little Women, who have toured North America and Europe extensively and released two records, the latest of which being Throat, on AUM Fidelity.  He also is featured on recordings with Joe Morris, Darius Jones, Dave Crowell, Olga Bell, Travis Reuter, to name a few.  Upcoming releases include the Noah Kaplan Quartet on Hat HutRecords and the Darius Jones trio on AUM Fidelity this summer and fall.