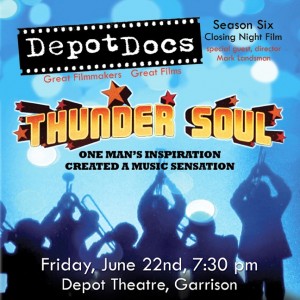 In the fall of 2007, producer/writer/director Mark Landsman was working in his office, when a story came up on the radio that caught his attention. It was about an all-black high school band from Houston that had become a national sensation during the 1970’. When a track from one of their eight studio albums was played, Landsman says he was riveted by “a wall of incredible funk music.” That music was the legendary, world-class sound of the Kashmere High School Stage Band, led by jazz musician turned master music teacher Conrad O. Johnson, known to his students, with affection and respect, as “Prof.”

The story, and the amazing music, had an immediate allure for Landsman, and he wanted to know more.  He found that Conrad Johnson was still living in Houston, and when they spoke on the phone, was happy to talk about his work at Kashmere High. At that point, Landsman was thinking of a fictional treatment of Prof’s reinvention of himself as a teacher, and his transformation of Kashmere High’s conventional stage band, playing jazz and American Songbook standards in easy listening arrangements, into one of the premier funk bands of the 1970s, performing, at a professional level, a catalogue of original music and intricately choreographed moves (in one writer’s words, “James Brown 101”), all of it composed and choreographed by the one and only Prof. But when he flew to Houston to meet Mr. Johnson at his home, to gather material for a narrative feature, he found a frail 92-year-old, surrounded by former students who were planning a reunion concert in his honor. It was suddenly clear to Landsman that he had the elements of a powerful and affecting documentary staring him in the face, and he didn’t blink.

The result is Thunder Soul, next up for Depot Docs on Friday, June 22, at the Philipstown Depot Theatre in Garrison. Powerful and affecting – absolutely.  Initially the focus is on Craig Baldwin, a self-proclaimed bad boy as a student at Kashmere High, whose charisma, drive, and love for Prof Johnson are behind the successful effort to bring alums back, not only from 35 years after their stage band glory days, but, for many of them, from just as long without having opened their instrument cases or played a note. The film follows the build up to the reunion concert with interviews of the band members and the Prof, wonderful archival footage and photographs, and a sound track that includes some of the greatest hits of Kashmere High’s funk powerhouse.

But the heart of the film, and the reason that there’s a story to be told, or that it matters, is Conrad O. Johnson: Prof. Like every great teacher, Prof brought his love for and mastery of his subject, which happened to be music, to the band room at Kashmere High, and he treated the young men and women he met there with kindness and respect. His only demand was that they take what he had to teach them as seriously as he did, and that that they perform at the highest level of which they were capable. The result was not only something very special in terms of the short-lived fame and the longer-term musical influence that the band achieved, but the deep sense of confidence, the wide expanse of personal potential, and the undeniable evidence of accomplishment that Prof’s students went out into the world with.

Of course, the fact that Kashmere High was in an impoverished section of Houston, and that these students, and their teacher, are black, is another reason to celebrate the tale that Thunder Soul so joyfully, playfully, and affectionately tells. The intimate lives of black American communities, unless they are about crime or dysfunction, are still too often lived on the margins or in the shadows of the popular culture. Thunder Soul shines a bright and beautiful light, and the music, well, just try not dancing.

Thunder Soul will be shown at the Philipstown Depot Theatre, Garrison’s Landing, on Friday, June 22, at 7:30 p.m. A Q&A with director Mark Landsman and a reception will follow the screening. Reservations are advised, and can be made by calling the Depot Theatre at 845-424-3900, or via their website.