Village Board hears of vast potential – especially in Philipstown 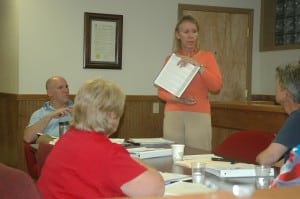 Libby Pataki at the Village Board with a county history book. Photo by L.S. Armstrong.

Putnam County may be small, but its potential for tourism visitors – and dollars – is huge. And many of the opportunities begin right in Philipstown, according to new county tourism director Libby Pataki.

Pataki, New York State’s former first lady, briefed the Cold Spring Village Board on Tuesday (July 24) on her activities, discoveries and ideas since taking office earlier this year. A Garrison resident, she cited her enthusiasm for backing the endeavors of area organizations and as examples mentioned Scenic Hudson and its West Point Foundry Preserve and PARC, organizer of the annual Cold Spring by Candlelight house tours.

On another front, she “will be your advocate” to get Carmel to return a portion of sales tax to Philipstown – where much of the county share is collected.

Already, she explained, “85 percent of our tourists are over here” in the western end of the county.  To increase interest, “we need to work with what we have. We have all kinds of things.” As examples, she mentioned Boscobel, the Hudson Valley Shakespeare Festival, state parks, the Hudson River, canoeing, hiking, bicycling, scenery, and a rich historical heritage. “We are a very, very small county, but we have a lot going on.”

Nevertheless, throughout Putnam, challenges remain, she said. For example, “we have an enormous chunk of our space taken up by the New York State watershed. That completely eliminates the prospects for doing anything.” And too few places exist for overnight stays, she said. “Other counties have hotels – ‘heads and beds.’ We don’t have that capability; we have it in a very limited way. I would definitely encourage” establishment of an inn with 20 to 40 rooms in Cold Spring, she added. “I don’t want to be left behind in the dust.”

Currently, Pataki said, many visitors arrive by train – “we have a tremendous railway system” in both eastern and western ends of the county – and “our biggest strength is day-trippers. From a tourism standpoint it’s your dream because they come in, they don’t cause any problem, they spend lots of tourism dollars, they have no place to stay, so they get on the train and go back.” But more can be done to lure and retain visitors, she proposed, outlining possibilities for golf tourism, boating, historic walking and heritage outings, tourism centered on fine dining, and bicycling. “It’s very safe and very beautiful” for bicycling – in many areas, she said.

However, she cautioned, along the Hudson, the situation with Route 9D needs serious attention, for the sake of both cyclists and hikers. As residents, she and her husband, former Gov. George Pataki, “have seen that road become more and more dangerous,” she said. Hence the importance of the Fjord Trail: “I wholly support that, wholly endorse that.”

At the same time, “I do believe the towns in this county should pay a little more attention to what tourism really means,” Pataki said. She defined it as “a hospitality industry … presenting a good face to the outside world … being welcoming. There are plenty of people in this county who can make life a lot more accommodating for the people who come in.”

For too long, she said, the county government itself paid too little heed to promoting tourism. Since​ ​​taking office, she said, she has focused on promotion, among other activities. An ongoing priority – ending her daily commute to Carmel by moving the tourism office to Philipstown. “I’m trying, because this is where the tourists are,” Pataki said. “That is definitely a target, to try to do as soon as possible.”