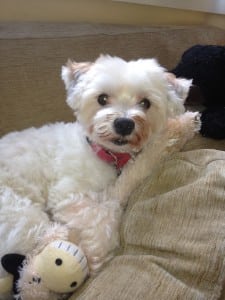 ​My dog Romio leads a very predictable life and is not fond of change. He’s gets up at 7 a.m. and does what we call a “lock down,” where he circles the cottage like a herd dog barking as if to say “back off coyotes — we’re up now.” Like the majority of us, Romio has a skewed view of himself. When he looks in the mirror he sees a Bernese mountain dog, but in all actuality he is a 12-pound fluffy white Havanese.

​So I was pretty shocked two Mondays ago at 10:45 a.m., when he sprinted out the door and disappeared up the mountain while I was preparing for our walk. As a former city dog, he’s usually pretty obsessed about walking on the leash and often barks for me to hurry up. I called and called. Gone. I had a feeling he was not coming back.

​I immediately was referred to John Funck. I soon learned, John — affectionately called “St. John of Assisi,” — runs a nonprofit lost animal rescue service with a network of over 800 people. I had no idea this kind of thing existed. John immediately took charge and began printing posters, sending emails, and making calls to alert his posse. Within an hour or two, neighbors began showing up with treats, scouring through the woods searching for Romio.

​Later, I learned most of what happened. Joe Binetti and his girlfriend Denise Wagner from Closter, N.J. spotted him crossing Route 9D as they were heading into Cold Spring. “Get him!” Joe shouted, pulling over as Denise jumped from the car and captured him. They then took him into Cold Spring, thinking perhaps someone might recognize him. Coincidently, they had their dog’s leash in the car, so they snapped it on him and walked through town. I guess my “stranger danger” lectures fell on deaf ears.

​Their first stop was Moo Moo’s. In actuality, this is Romio’s favorite ice cream shop. With us, he usually gets a vanilla cup. With his new friends, he ended up with vanilla cherry. Joe remembers thinking “He’s been here before.”

​After that, they ventured upward into town. As they passed Romeo and Juliet hair salon, Denise turned to Joe and said “Romeo and Juliet” — let’s call him Romeo.” Little did they know this was his name, given to him by my daughter Juliette, though we spell it with an “i.”

​At Reigning Dogs & Cats Too, they went inside and bought a big bag full of treats and toys. I could just imagine his devilish little face as he was walking out of there! Meanwhile, we’re hightailing it all over Garrison, getting eaten to death by mosquitoes, posters are flying up, the phone is buzzing, Facebook is cranking and still everyone is wondering … Wherefore art thou, Romio?

​After making several attempts to call the number on his tag to no avail, Joe and Denise decided to take him home. So they brought him to their home and set him up with food and treats fit for a king. When I asked Joe later if Romio appeared to be sad he replied, “Not at all! I’ve rescued dogs before, and they’re always happy! Dogs forget easily. He even slept in Denise’s bed!” STOP.

​Did you just say he slept in Denise’s bed? Turn the knife a little harder, why don’t you? How could he? The ultimate betrayal! I raised him, fed him and moved him from the city to the country so he could chase birds and foxes! (That’s not entirely true — we wanted to leave, too.) How dare he — the lying cheating scoundrel! I felt like one of those men or women who “had no idea.”

​Meanwhile, with the help of John Funck and his group, we continued looking for the rest of the day and into evening. At this point I thought he was in deep trouble. Like most people whose pets become lost, I couldn’t sleep as my mind obsessed about all the terrible things that could have or could be happening to him. 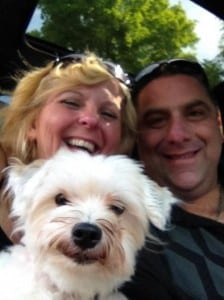 ​The following day John sent another email out pleading for help as I worked and waited. Around 1 p.m. I got a call from Allie from the Cortland Animal Patrol. Apparently someone had called her and said he found a little white dog and was taking him home to Jersey.

After I finally reached him all I wanted to say was, “Where do you live? What’s your address?” Instead we talked about what a lovely day the three of them had. I waited anxiously, hoping he wasn’t going to ask for ransom or tell me he had indeed fallen in love with Romio and had decided to keep him. Finally, he gave me their address.

​Around 6 p.m., I went to pick up our little Romio. Upon arrival, he looked momentarily shocked, like, “Darn it, I’m caught!” But he recovered quickly, smiling — wagging his tail — and then jumped into my arms. I chatted with Joe and Denise for a while and they showed me pictures of their splendid day with Romio. I promised to keep them posted on Romio’s life as we bade farewell.

​As we started to pull away, I have to admit I felt slightly betrayed when Romio jumped up and placed his paws on the window as if to say goodbye to his new-found friends. I turned to him, “How could you leave us? I can’t believe you could just run away like that!” I waited, no answer. He just crawled into his usual spot on the floor of the car. He hates long car rides.