This winter sports season features a first for the Haldane athletics program: Three students are representing Haldane by playing varsity hockey. Previously JFK High School and Putnam Valley High School had been combined as a hockey program, and this arrangement had existed for several years. This year, however, they realized their numbers were looking thin and would have to add a third school to the mix to keep the program going. 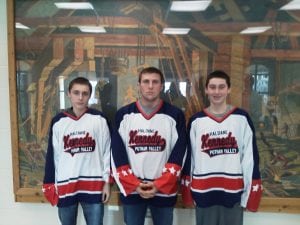 Owen Thomas, Jacob Cox, and Anthony Percacciolo answered the call, not only keeping the JFK/Putnam Valley team alive but starting a new tradition in the process. Owen Thomas is a senior and the oldest of the three; he plays forward and wears number 61. Jacob Cox is a sophomore who plays goalie for the team and wears number 30 in honor of New Jersey Devils great Martin Brodeur.

The youngest of the three is freshman Anthony Percacciolo, who plays defense for the team and wears number 33. The three students realize that this is a unique opportunity and could end up being a watershed moment in the school’s athletic history. “It’s the first Haldane hockey team, so it’s really nice to be a part of that,” said Jacob. The opportunity has not come without a unique commitment though.

The team practices once a week in Brewster, which is about a 30-minute drive for the boys. Owen, being the only one old enough to take the task, drives his teammates to and from practice every Tuesday. “We leave at about 7:45, and we usually don’t get home until around 11:30,” explained Owen. “And it makes for some long Wednesdays,” added Jacob.

The travel costs these boys pay are entirely out of pocket, and the team receives no funding from any of the schools. This forces each player on the team to pay for everything they need. Ice time is notoriously limited for local hockey programs due to a lack of facilities, which forces the team to only practice once a week. Owen pointed out that occasionally the team will practice twice a week, but the usual routine is every Tuesday night.

Even though the team doesn’t have a lot of time to practice, the JFK/Putnam Valley/Haldane conglomerate has seen success, posting a 5-1-1 record on the season. The players described their team as a tough team with a strong defense and an emphasis on checking. Currently the team needs one more win to make the playoffs in their first year of playing together. “For the first year of playing together as a team, that would be a nice accomplishment,” said Jacob.

The team’s chemistry has formed quickly, which can be the difference between a win and a loss in a close game. Owen mentioned, despite not having played with his teammates until this year, he feels comfortable with them now. Anthony added, “When I do make a mistake (on defense), they pick up on it, and it lets me regroup.”

Looking forward, the Haldane portion of the team will definitely change next year. Owen will be on to college (and hasn’t decided if he wants to pursue playing hockey or football). The remaining two of the founding three will look to expand the program within Haldane. Both Anthony and Jacob know younger players currently in eighth grade who play hockey and will be entering Haldane next fall. They both said they will talk to these players and try and recruit them to the team.

The three members are also quick to encourage potential players who may not be willing to make the commitment. Owen, Jacob and Anthony were all beaming when they were talking about how much fun this season has been for them. The three also point out there’s no harm in trying to play. “Even if you just go to the first couple of practices just because you want to see how it is,” said Anthony. “The coaches are really understanding to just how big of a commitment it is,” added Owen.