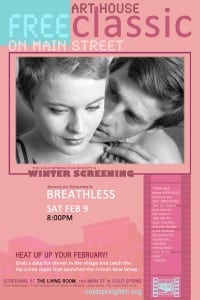 In 1959, critic-turned-director Jean-Luc Godard tapped veteran war photographer Raoul Coutard to film what was to become one of the most influential films of its time. Filmed throughout Paris using handheld cameras and low lighting, Breathless follows the brief, ill-fated romance of Michel (Jean-Paul Belmondo), a small-time crook, and his American girlfriend, Patricia (Jean Seberg), to its iconic finale.

Godard’s improvised, on-location script writing, and the “jump cut” editing style used to finish the film are emblematic of the French New Wave. Breathless is a must-see for all lovers of cinema, lovers of French, and lovers of free films in Cold Spring.

Popcorn, as well as admission, is free. Seating is limited. For more information about the Cold Spring Film Society, visit their website, coldspringfilm.org.