The railroad in Fishkill

The Beacon Sloop Club’s winter free lecture series is held on the third Friday of the month from January through May. The February program, How the Railroad Transformed the Beacon Waterfront and Dutchess County, features local railroad historian Bernard Rudberg discussing the history of the railroad in Dutchess county including the complete rebuilding of the Beacon waterfront before World War I, featuring rare photos from the Beacon Historical Society Collection.

The year 1913 saw the founding of the City of Beacon, the opening of Grand Central Terminal, and a complete transformation of the Beacon waterfront. Rudberg will describe the history of the railroad from Dutchess Junction through Matteawan, Fishkill, Hopewell, Millbrook and Pine Plains to Millerton, based on the original railroad record books from the ND&C Railroad. 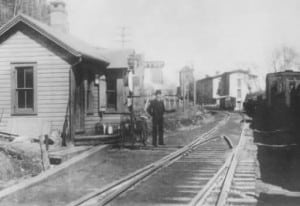 Rudberg grew up in a Swedish family in southern New Jersey. Railroading has been in the Rudberg family for at least three generations. His great grandfather started with the Swedish railroads in 1874 and was stationmaster in Polcirkeln, where the tracks cross the Arctic Circle in northern Sweden. His grandfather was foreman of the station in the junction town of Boden.

After retirement at the end of 1991, Rudberg wanted to continue the family tradition. He is the past president of the Hopewell Depot Restoration Corp, which owns the Hopewell depot and plans to restore it as a small museum and educational facility. Rudberg and his wife live in the Town of East Fishkill within hearing distance of the Beacon line and the former Maybrook line.