Nearly 100 members and friends of the Cold Spring Area Chamber of Commerce saluted leaders of the local business and nonprofit sector March 21, taking time as well to recognize the talent in the next generation with awards to two students.

Gathering at Dutchess Manor, an elegant old mansion above the Hudson River just north of the Putnam-Dutchess county line for the annual awards dinner, the chamber honored Putnam activist Rand Bridget Otten with the Katie O’Donnell Award of Excellence. 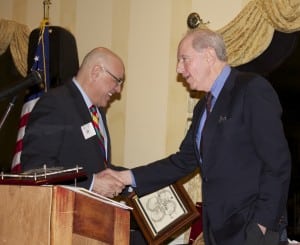 Gordon Stewart, publisher of Philipstown.info and its print weekly, The Paper, received the Business Person of the Year Award.

In presenting the O’Donnell plaque to Otten, Chamber President Vinny Tamagna, the master of ceremonies, said “this is our top award. He described Otten as representing “the fabric of Cold Spring … the heart and soul of it.”

Chamber officials subsequently said that Stewart had “engaged the audience with humor and grace while sharing a message of the importance of putting aside differences to work together for a greater good.”

Stewart himself said being tapped for the honor is “an act of reaching out” by the chamber that “I deeply appreciate.”

In other dinner highlights, Haldane High School seniors Sarah Diebboll and Katie Robertson claimed the Philip and Esther Baumgarten Memorial Scholarship and the Young Professional of the Year Award, respectively.

Prominent guests included state Sen. Terry Gipson and Assemblywoman Sandy Galef, who gave each honoree a proclamation and citation, respectively, District 1 Putnam County Legislator Barbara Scuccimarra, and Bill Nulk, president of the Putnam County Chamber of Commerce. Galef helped present the Realty Person of the Year award to Sylvia Wallin, branch manager of the Houlihan Lawrence firm, while Scuccimarra assisted in giving the one for Nonprofit Organization of the Year to Leslie Heanue, for the Therapeutic Equestrian Center, which Heanue founded and owns.

Otten, a Newburgh resident who grew up in Garrison and formerly lived in Cold Spring, is director of development and outreach for PARC, which works with the developmentally disabled. Along with other initiatives to benefit both PARC and the community, she created the popular pre-Christmas Cold Spring by Candlelight tours of historic homes and buildings, which also highlights Main Street businesses, and the similar summer Secret Garden Tour. Otten also has long been active in the Chamber of Commerce and is a former secretary of the organization. 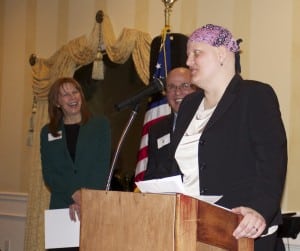 “This is a wonderful honor,” she said on receiving her plaque. “I’m honored, I’m privileged, and I’m touched.” She described herself as feeling a bit emotional: “It’s a tough exterior and inside it’s a wilting flower,” she said of her demeanor. Otten in turn praised her staff and PARC supporters, friends and family. “I truly believe this award is shared with so many people who’ve helped me along the way,” she said. She received a standing ovation.

In presenting Nathalie Jonas of The Living Room on Main Street with the Innovation Award, Tamagna pointed to a new vigor in the local business community. “Think outside the box, because a new Main Street is coming and it’s because of places like The Living Room,” he said. Since opening in 2011 in the old Palen’s Drug Store building on Main Street in Cold Spring, The Living Room has offered space for wedding receptions, fundraisers, concerts, classes, performances and other events.

“One of our focuses is to collaborate with other businesses, and I look forward to that,” Jonas said in accepting the award. 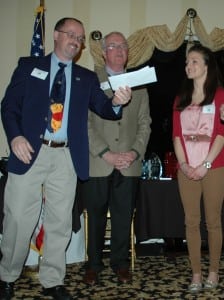 With a record in athletics as well as academics, Diebboll, who won the memorial youth scholarship, is vice president of the Haldane International Club, school art design editor, varsity soccer captain and president of the Haldane Leo Club, a service organization. Among other pursuits, she also works on Main Street in Gallery 66 — whose founder, artist Barbara Galazzo, also was honored, receiving the chamber’s Cultural Achievement of the Year award.

Robertson, proprietor of Katie’s Cold Spring Honey, produced by hives she tends, uses the income from her small business to support her passion for aviation and flying lessons. A student pilot, she hopes to earn her private license this spring. She helped found the Haldane girls tennis team; is a member of an alpine ski racing team (and won a gold medal in competition in February); holds certifications for scuba, advanced deep-water diving, and sailing; fences; and drives a restored Vespa scooter.

Stewart established Philipstown.info, an online daily news medium, in July 2010, and in June 2012 started The Paper, its adjunct print weekly.

At the dinner, he lauded the chamber for rising above any local animosities, factionalization, and narrow-mindedness to promote a wider vision. “You guys have a lot of guts,” he said.

He pointed to the chamber’s recent resurgence, declaring that when he first arrived in Philipstown several years ago the group “didn’t seem all that active. But I’m impressed at the effort being made now to create a common purpose, a broad-based organization reaching out to everyone. And the sense of common purpose is essential to the prosperity of this community.” Common purpose “is the essential soul and core of a Chamber of Commerce. And I’m also delighted to see that being revived here tonight.”

He highlighted Tamagna’s role in numerous events over the years and said he recently came to understand the depth of Tamagna’s involvement. “I don’t know anybody more committed, more genuinely and honestly dedicated, to the well-being and progress of everyone in this community,” Stewart said.

Just as he received his own plaque, he presented Tamagna with a “Member’s Claim Check,” a large certificate suggesting that, like cars or coats, all ill-feeling be parked outside chamber events. The document said it is “good for all competitive hostilities, personal animosities, and political proclivities” and expresses the hope “that they might be at least somewhat diminished by pursuit of our common purpose to the benefit of all and the detriment of none.”

Stewart likewise noted the talent pool in the room and community beyond. “If you look at the enormous range and breadth of people who have done things here in a small community, it’s absolutely astonishing,” he said.

In a post-event news release, Chamber leaders linked the 2013 awards to a new approach. “This year, the CSACC broke from tradition, creating nine new award categories, in order to better reflect the growing, diverse business community in the area,” the group declared. “The CSACC board is creating structure and has established awards criteria, now published on the website. And for the 2014 Annual Awards, the Chamber will seek nominations through its membership.” They said this year’s dinner had allowed attendees “to celebrate the awards given to recognize outstanding business and community-related successes and followed the general mission of the chamber to unite and promote all that the community has to offer.”

In addition to Otten, Jonas, Diebboll, Robertson, Galazzo of Gallery 66, Wallin, Heanue and Stewart, the chamber 2013 honorees are:

Retailer of the Year: Reigning Dogs and Cats Too

Likewise, the chamber honored three of its own former officers with service awards: Marshall Mermell, president and owner of MKT Works Inc., past vice president; Christina McCoy, M&T Bank branch manager, past board member; and Bill Nugent, owner of Pagent Distributing, past board member. 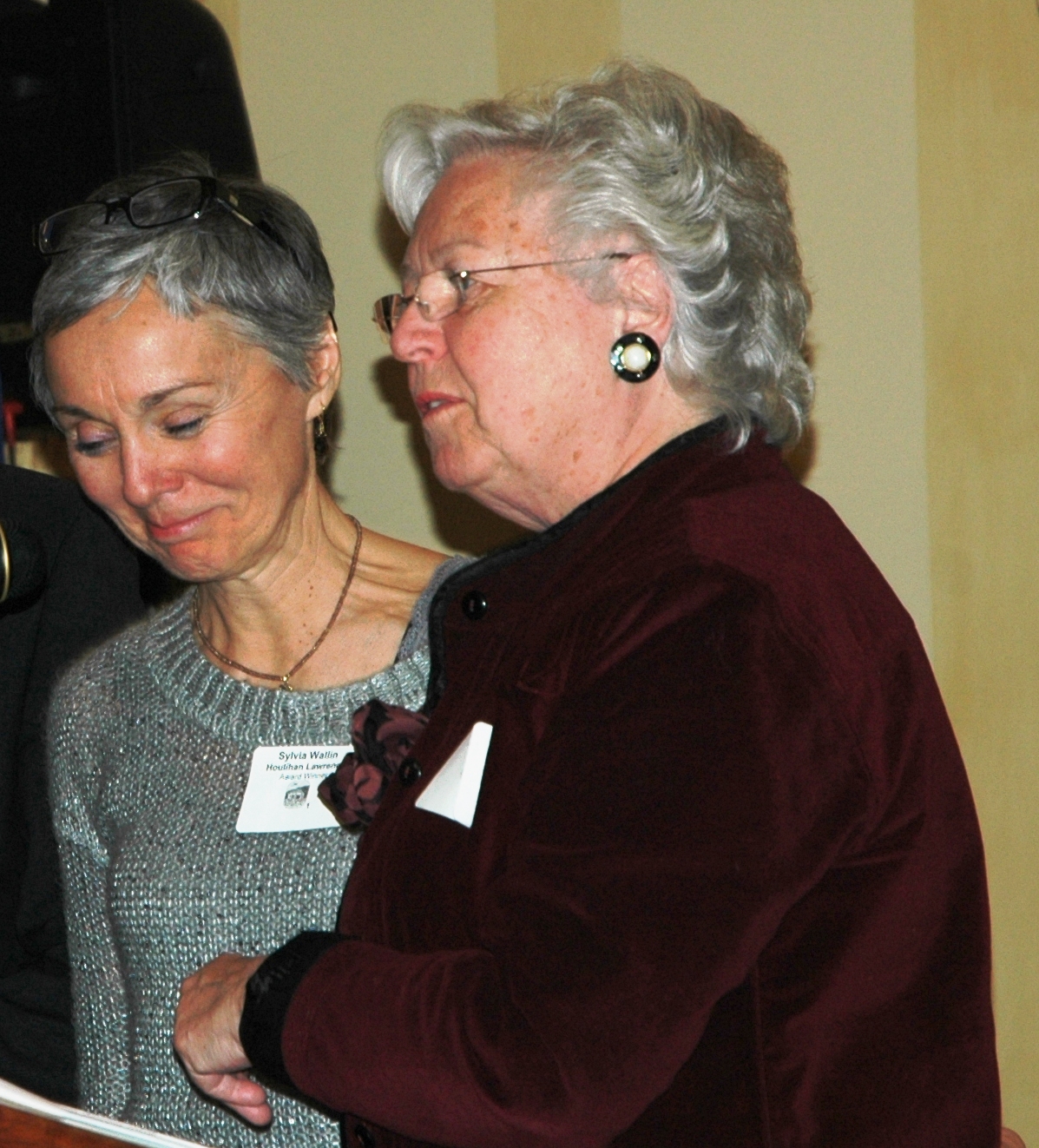 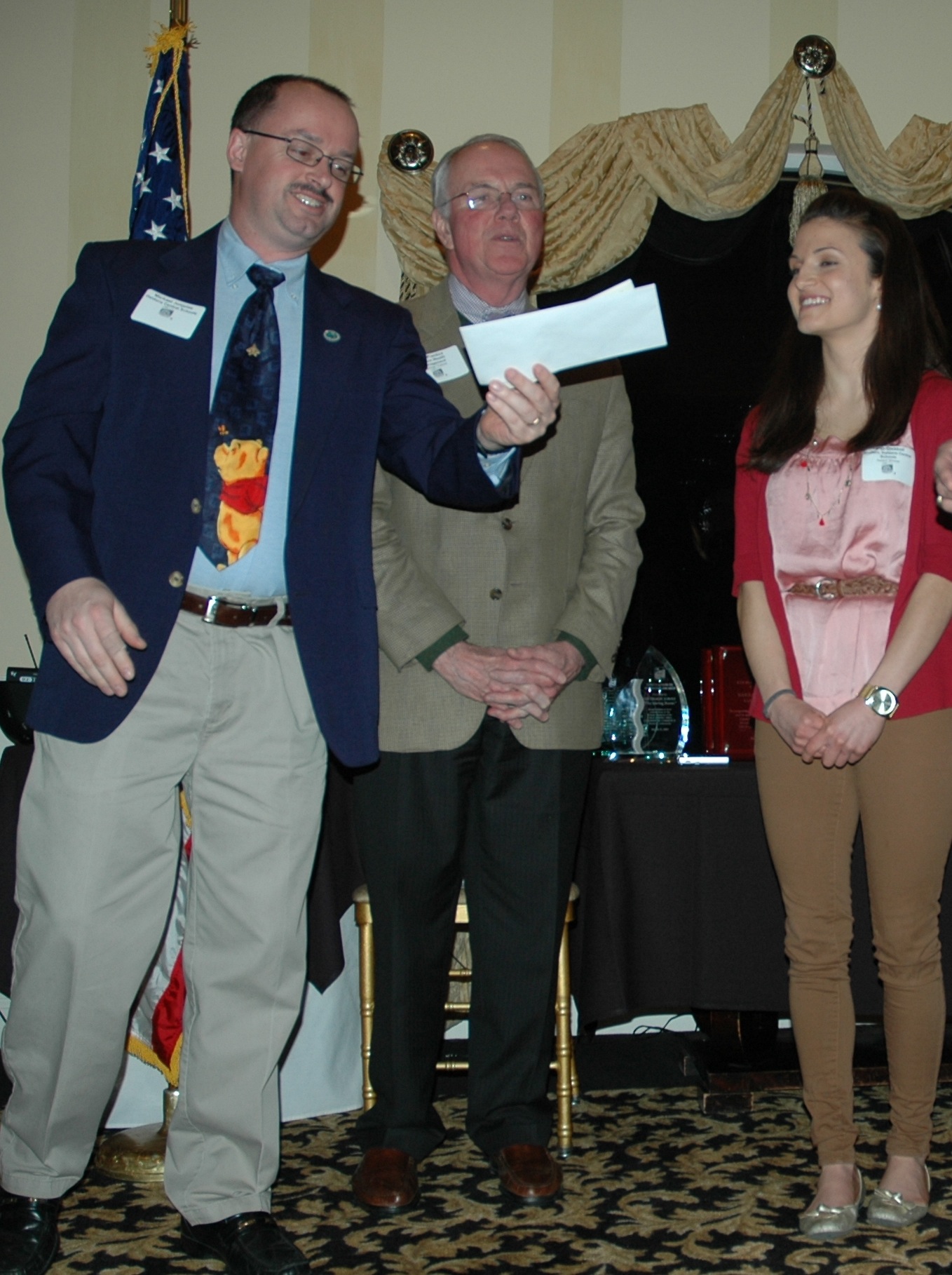 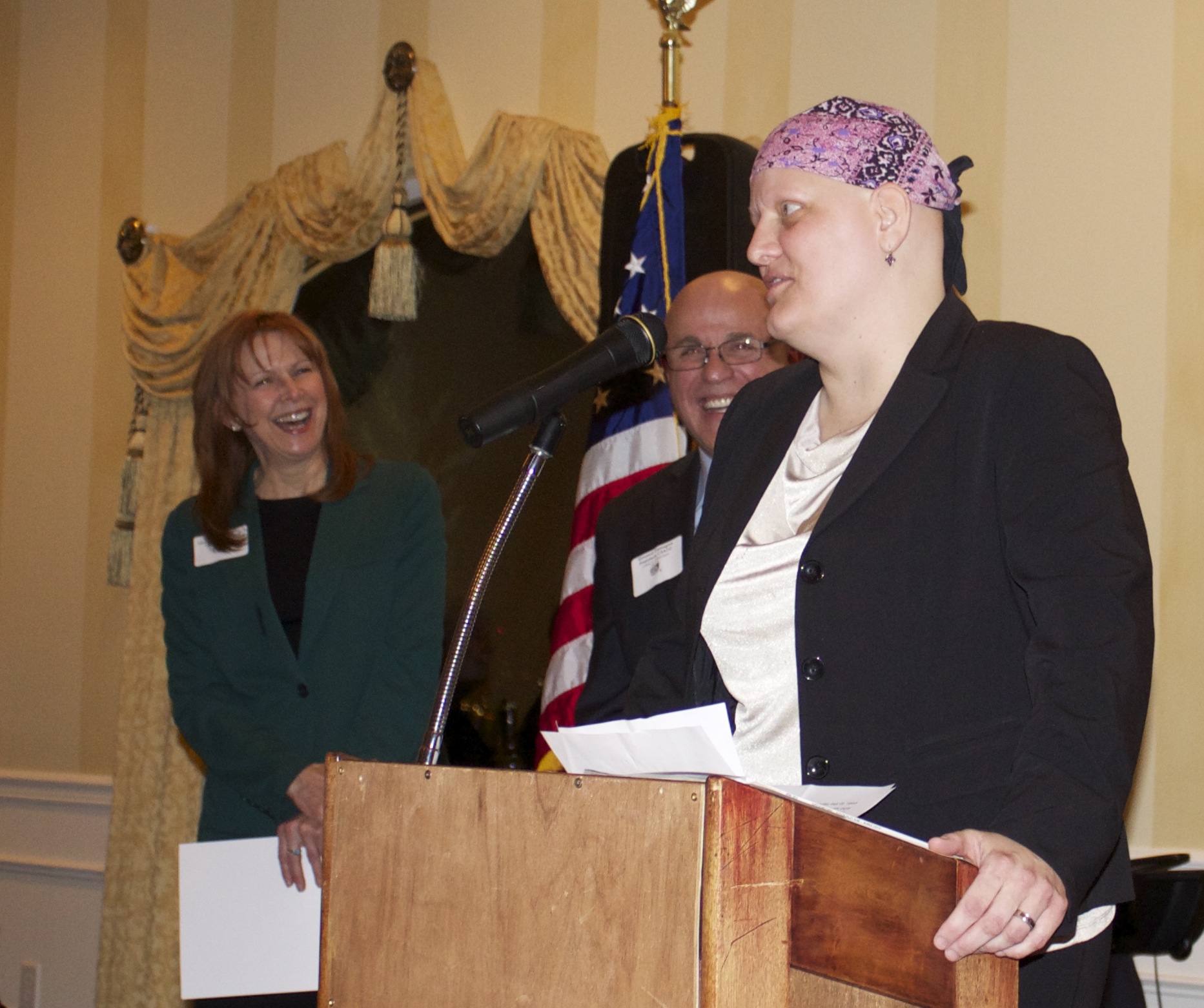 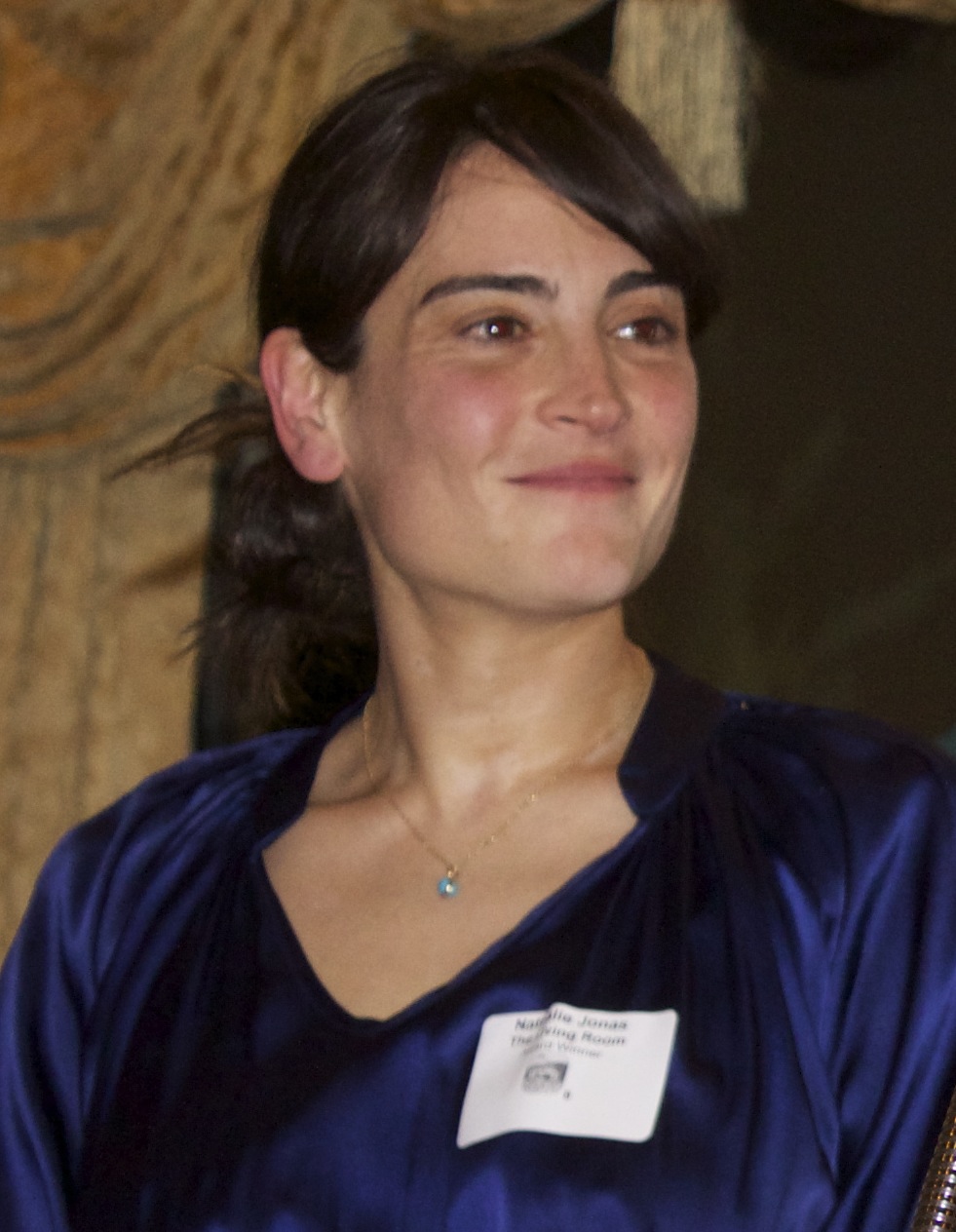 Maryjane Nagel, owner of Reigning Dogs and Cats Too, won the Retailer of the Year award. 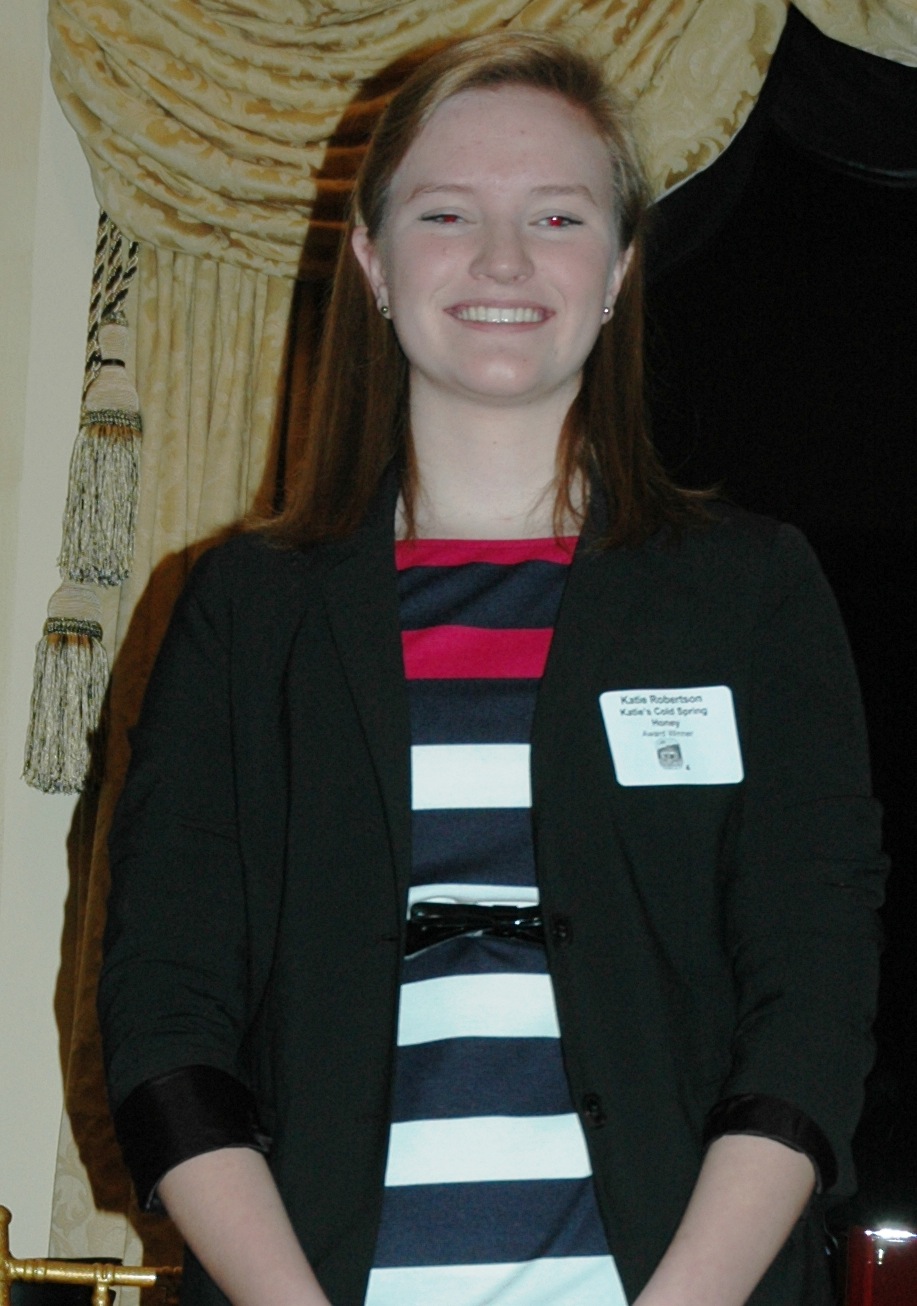 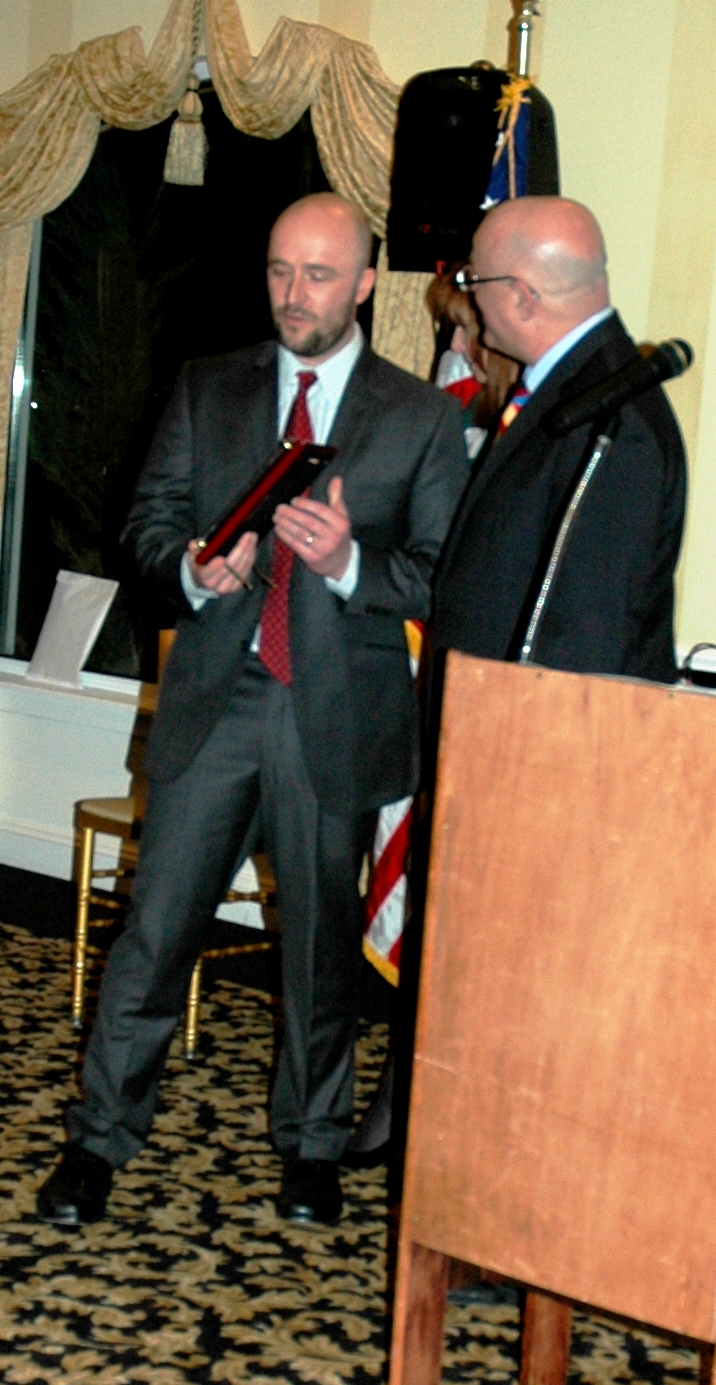 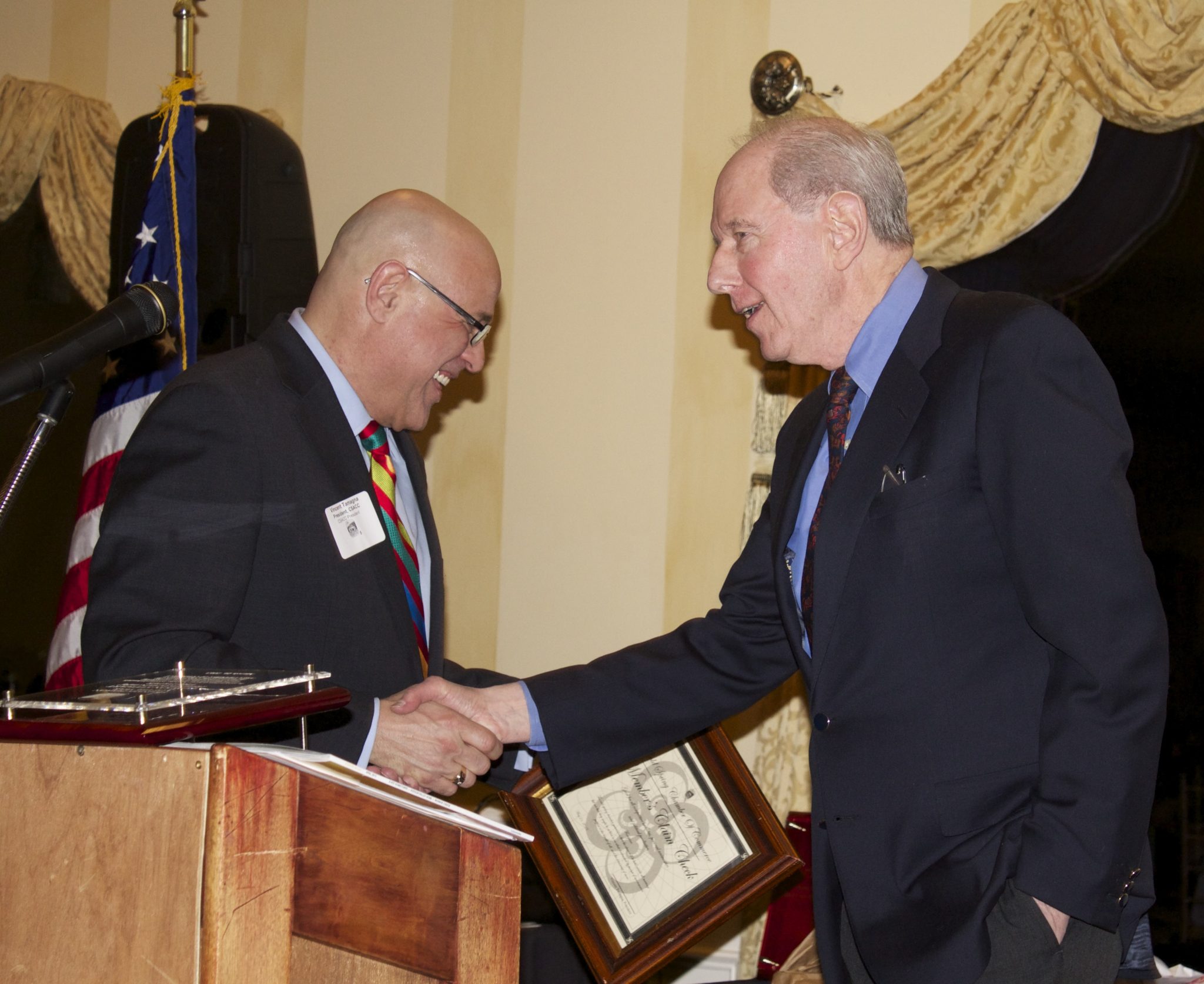 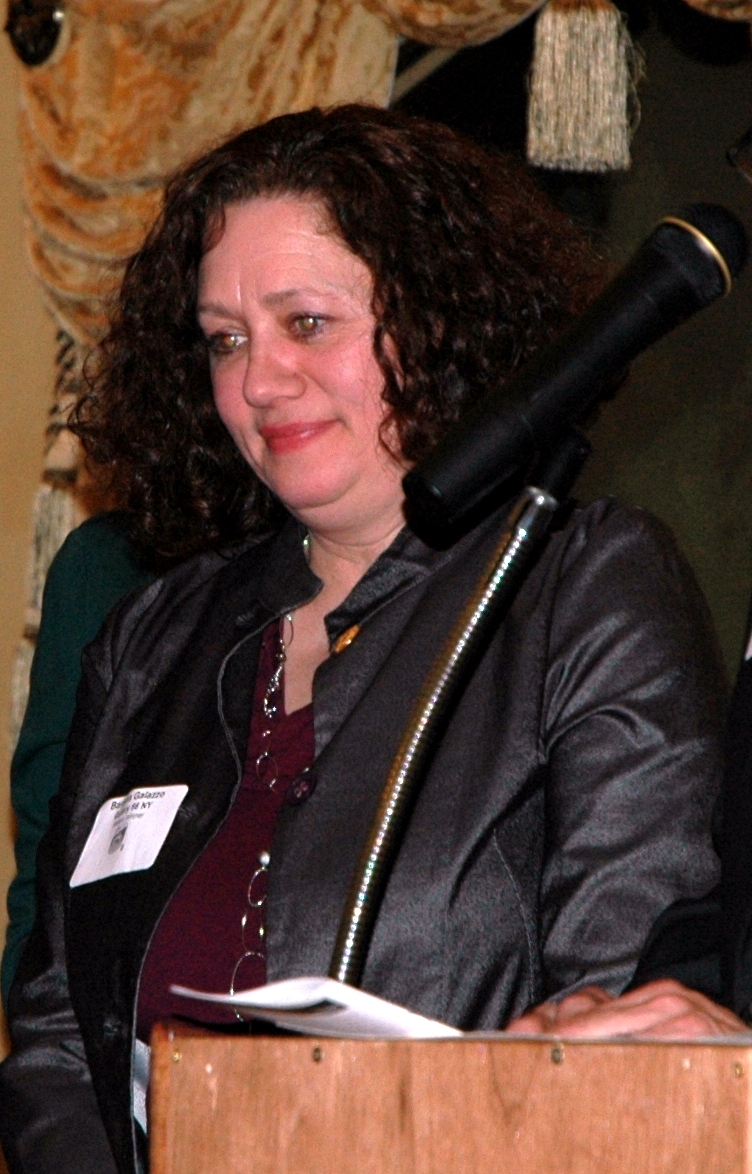 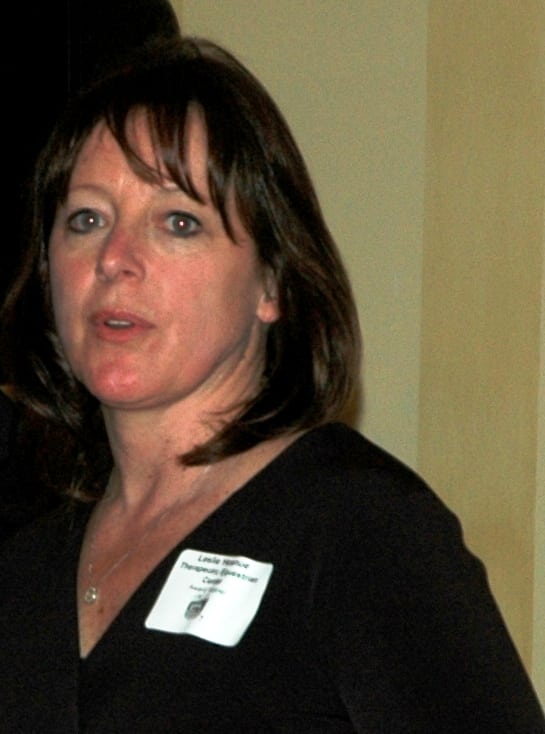 Leslie Heanue owns the Therapeutic Equestrian Center, which won the Non-Profit Organization of the Year award.