The second week of spring and we dodged another Winter Storm Watch. As the cold weather lingers, I’ve missed those fresh, hopeful signs of spring that I’ve tracked much earlier in previous years. Most obviously, the frogs haven’t reappeared yet. For the past two years, they’ve showed up to party for St. Patrick’s Day, making a racket in our pool that lasts until June. No matter what we do, the pool cover comes loose every winter and the frogs move in before we get out there. It becomes a nursery until the tadpoles are big enough to be scooped into buckets and moved to a better home in the pond, at least all the ones that Black Francis, our resident black rat snake (named for the lead singer of the punk rock band, the Pixies), hasn’t made into dinner. 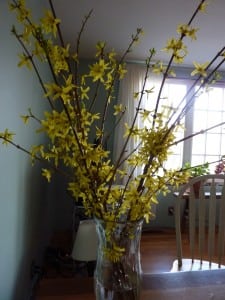 Create spring inside by forcing your forsythia to bloom now.

I spoke with Dianne Olsen, the senior extension educator with the Cornell Cooperative Extension of Putnam County, about it. Since it seems like the warm weather is coming so late, will this delay our growing season? Dianne said: “Nothing is wrong at this point; it’s all just a little slow. Buds are forming on the shrubs. The lilacs and forsythia are powering up for their burst of color. Any crocuses that were blooming before the most recent storm were probably damaged, though. Their tissue is too delicate to hold up, but the plants won’t die. They’ll be back next year.”

Dianne and I chatted about what impatient gardeners could be doing now to prep for the growing season. Dianne offered a few suggestions: “It’s not too late to prune some shrubs and plants. You can cut butterfly bushes back to 9 inches from the ground and ornamental grasses to 6 inches. This is a good time to prune and shape boxwoods, too. Cut out any dead branches now before they start their growing season. Leave the roses alone, though. Resist the temptation and wait until the leaves form.” By carefully pruning certain trees and plants, you can rejuvenate them for new growth.

If you’ve been tracking the signs of spring as I have and want to put your powers of observation in the service of the greater good, check out BudBurst.org. It’s a national network that tracks the life cycles of plants, including flowering, leafing and fruiting. The organization collects data about certain plants, and scientists use the information as a record of changes on our planet.

The National Phenology Network tracks plant and tree growth cycles, and bird migrations, insect life cycles and wildlife habits, as well. You can sign up to add your observations to Nature’s Notebook on the site, usanpn.org, and also search their database. If you like spreadsheets and databases, just make sure you don’t have anything else to do before you get started. You can fall into this Internet sinkhole for hours, and I might know that from experience. 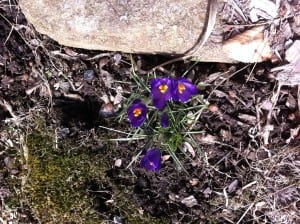 This kind of data demonstrates the impact of our changing climate on ecosystems. We can see if the habits and patterns in the world around us are changing and what that triggers. An interesting example I found is the bloom time for apples in New York, a significant part of our state’s agriculture. Our apples are blooming eight days earlier on average than 30 years ago. That doesn’t sound like a terrible problem, as long as the bees arrive at the same time. Everything in our landscape has a purpose and a rhythm that keeps nature in balance. It doesn’t take more than a careful reading of the daily news to realize there are many indicators that things are out of balance right now.

How great would it be if we had a network of citizen phenologists across Philipstown? We could be writing the history of the ecosystems we live in and sharing it, noting changes year by year. I love the awareness I get from observing nature and feeling connected to the change of seasons. Send an email if you’re interested. This could be a great project.