The West Point Band will present its first Music Under the Stars concert of 2013 at the annual Independence Day performance Saturday, July 6, at 8 p.m. at the Trophy Point Amphitheatre. In the event of poor weather, the concert will be held Sunday, July 7, at 8 p.m. The performance will feature the Hellcats, the Concert Band and the Benny Havens Band. The evening will conclude with a fireworks display. This concert is free and open to the public. 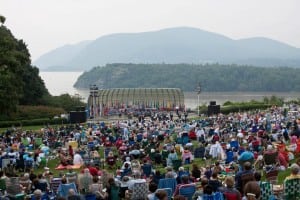 Following opening remarks, 50 West Point Cadets from the class of 2017 will participate in the “Salute to the States” presentation. Each cadet will place a flag from his or her home state until every state of the Union is recognized.

The Concert Band, conducted by the West Point Band’s commander, Lt. Col. Jim Keene, will begin the concert. Selections include The Official West Point March, The Stars and Stripes Forever and The Armed Forces Medley. The West Point Band’s rock band, the Benny Havens Band, will take over to perform a number of popular songs familiar to the audience. The concert will conclude with a fireworks display set to the music of the West Point Band.