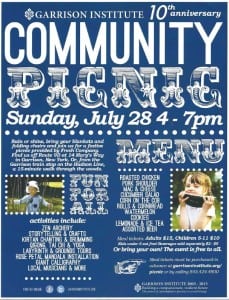 The Garrison Institute will hold a Community Day Picnic, an event designed to involve the community in the year-long celebration of its 10th anniversary, from 4 to 7 p.m. Sunday, July 28.

The free event, which will include activities such as crafts, tai chi and Zen archery, is the first such event hosted by the Institute specifically with the local community in mind. It is also the realization of one of the hopes held by Director Robyn Brentano and the Institute’s Community Advisory Board, of forming stronger ties to Philipstown and the lower Hudson Valley.

The Garrison Institute, housed in a former Cappuchin monastery on the majestic riverfront land parcel known as Glenclyffe, is marking this calendar year with a series of events celebrating its first decade as a retreat center focusing on contemplative practices.

In April, a formal gala was held at Manhattan’s Pierre Hotel. This month’s Community Picnic is the summer’s primary anniversary-related event. And in October, the year-long celebration comes in the form of a concert at New York’s Town Hall, curated by composer Philip Glass and based on music from a variety of religious and faith traditions such as Christianity, Sufism and Hinduism.

Although the Garrison Institute regularly hosts events such as film screenings, concerts and lectures to which the community is invited, they also cater to a global community. With an international profile that has the potential of making the organization appear remote to locals, the institute hopes that this month’s Community Picnic will offset some of that.

“This month’s Community Picnic is intended to be fun and reduce any mystery,” said Nate Binzen, Garrison Institute’s Communications Manager.

The Community Picnic will also offer music and storytelling by a lineup of local performers to be announced. True to the spirit of any picnic, food will play a key role. Fresh Company, the Garrison-based caterer and the institute’s resident menu planner and provider, will offer pork shoulder and roasted chicken, along with picnic staples like corn-on-the-cob and watermelon. Meal tickets are available for advance purchase but guests are also invited to bring their own food. Visit garrisoninstitute.org for more information or to reserve a picnic meal.