Late blight is in the air

Although this recent heat wave might have erased from our minds the cool, wet weather we had until recently, Phytophthora infestans hasn’t forgotten because it was the perfect condition for the spread of late blight, a disease that destroys potato and tomato crops. Late blight caused the Irish potato famine of 1845 and continues to have devastating consequences worldwide. It’s such a problem that there is a website devoted to tracking it nationally, USABlight.org. On the website, gardeners and farmers can monitor their area and know when to check their plants. 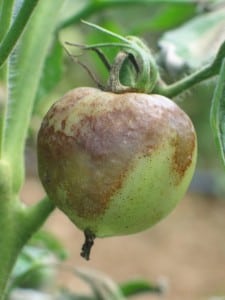 Late blight has been identified in eleven states so far this summer, including Madison and Erie Counties in New York and in New Jersey and Massachusetts. Gardeners should be closely observing their plants for signs of late blight to prevent the spread. Late blight is a fungus-like pathogen that can infect every part of the plant, including the fruit and tuber. Visible signs of infection appear on the leaves, stems, and fruit as lesions that are dead-looking or like watermarks.

Late blight spores spread in the wind and from being splashed onto other plants by rain or during watering. It can’t survive long in hot, dry weather, but cloudy, wet days are ideal, which we had a lot of this spring and early summer. With precaution and monitoring, it’s possible to keep late blight from spreading through the garden or if your plants are a lost cause, take care of it immediately to prevent the spread to other gardens.

Inspect plants daily for signs of infection. Infected leaves can be removed and the rest of the plant may not succumb. Any infected matter, though, needs to be disposed of properly. Whether it’s an entire plant, an infected tomato or a leaf, never ever put it in the compost pile. Doing so gives Phytophthora infestans a great place to hang out until next summer. According to Cornell’s online resources, once 5 to 10 percent of a plant is infected, it’s a lost cause and needs to be removed.

If you find late blight in your garden or what you think may be late blight, contact the Cornell Plant Diagnostic Center plantclinic.cornell.edu. They can confirm the diagnosis and then you can add your information to the national site. Accurate tracking through home gardeners helps to understand the spread and impact of late blight in the growing season. 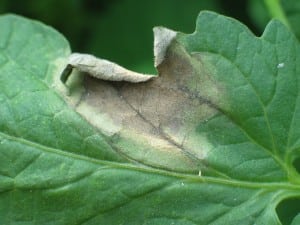 Leaf spot presents itself in commercial and home gardens.

Diseased plants should be sealed in a plastic bag and left in the sun for a few days to kill the spores and then thrown in the trash. Alternatively, bury the plants deep enough underground so that the plants can decompose without re-sprouting, but as we all know, digging in our rocky Philipstown soil isn’t an easy task. It’s really important to follow these guidelines and help prevent the spread of late blight. We all love our Solanaceae. What would life be without tomatoes and potatoes!

If plants haven’t been preventatively treated for late blight, it’s too late to start once they’re infected. Fungicides applied in low doses repeatedly can protect plants starting early in the season. Several tomato cultivars are resistant to both early blight and late blight and these are great choices to fend off problems before they begin. Both Mountain Magic and Plum Regal are two resistant varieties gardeners can plant with fewer problems. Careful watering also protects tomatoes. Tomatoes don’t like wet leaves. Aim to get the water at the roots without splashing the leaves. In general, early morning watering gives plants the resources to get through a hot day and ensures that the plant is dry overnight, when temperatures drop.

More resources for information and photos of late blight: