In the midst of the season’s first real heat wave, it was hard to imagine the climate getting any hotter – or wanting it to. Yet, this past weekend, Beacon’s Studio .925 intentionally raised the mercury to 3,000 degrees for their inaugural iron pour. HE(Fe)STUS, organized by Chip Schwartz, Marisa Lomonaco and Charlie Engelman, local craftspeople whose medium is metal, took place last Saturday at their outdoor facility on Hanna Lane.

The title of the event comes from Greek mythology. 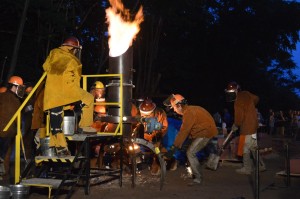 “Hefestus was the Greek god of metal workers and craftsmen,” explained Schwartz. “He was the son of Zeus and Hera, who tossed him off of Mount Olympus for being too ugly. He worked with metal under a volcano, using cyclopes as assistants, and was revered for his beautiful jewelry for women and weapons for men. The title also incorporates the word ‘fest’ and ‘Fe,’ the symbol for iron on the periodic table.”

A “pour” is the process in which metal is melted in a furnace and poured from a container or ladle into a mold of ceramic shell or bonded sand. Although the organizers have experienced pours professionally, this was their first time organizing an event of this scale. Through networks and word-of-mouth, they rallied metal artists from Alfred College, Skidmore College, Ramapo College and other friends who wanted to be involved. Schwartz and Engelman enlisted additional support from their co-workers at Polich Tallix Fine Art Foundry in Rock Tavern, N.Y.

“Iron art is very much a subculture of the sculpture world,” said Schwartz. “It’s a tight-knit community of people who will drive across the country for a pour.”

“We bond over the element of danger,” added Lomonaco. “It’s like being on a sports team but way better.” 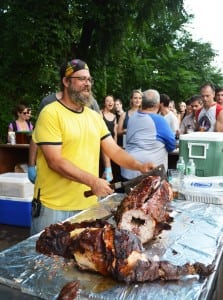 Staffing a pour is similar to assembling a ship’s crew and requires the same precision teamwork. Engelman, the operation’s captain, explained, “We pulled together teams of four people. A core team fuels the furnace with coke (material derived from coal), stokes the flame, and taps out the molten metal. Pour teams catch it in the ladle and bring it to the molds to fill. A ‘skimmer’ pulls the impurities off the top of the liquid. A safety person is ready with a shovel to put sand on anything that might catch fire.”

Watching a pour is suspenseful. “When you’re working with material at 2,800 to 3,000 degrees, safety is an obvious concern,” he continued. “If molten iron hits any moisture on the ground, it instantly turns into steam and pops up into the air.” Heat exhaustion and dehydration were also issues. Team members were covered head to toe in heavy gear designed to deflect anything coming at them, much like a fireman’s uniform. An EMT rescue squad was standing on the sidelines.

Pours are common at foundries, but the trio wanted to create something for the community that demonstrated this process in a fun, inclusive way. Most of the scrap iron was purchased from Mac Steel in Vermont then broken down by hand into piles that fit into the mouth of the furnace. Local artists who participated as team members in the pour met at the Foundry prior to the event to create resin-bonded sand molds of their own. An additional 50 scratch blocks (small molds) were sold on Saturday to attendees.

Engelman estimates they poured 1,600 pounds of molten iron into more than 80 molds, which were left to cast overnight and picked up on Sunday. Lomonaco credited Morgan Donahue, a longtime employee at the Foundry, for playing an integral role in helping many of the artists make their molds. 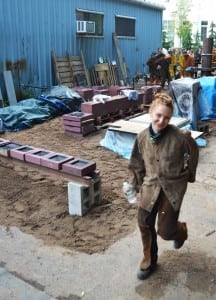 The pour process has been scaled down for fine arts only recently. “Most pours are now automated, calculated and controlled,” said Engelman. He made the fully manual cupola furnace, nicknamed Apollo 26, which was used on Saturday. “It’s a piece of art used to create art. I like to think of them as living things to which you have to respond.”

“Fire has always brought people together,” he concluded. “The way we hang around a campfire, or in the kitchen when something’s cooking. When we watch fireworks. There’s something about it that draws us in.”

Live music performances, a pig roast and a burlesque show complemented the evening’s pyrotechnics. Lomonaco estimated that 500 people attended the event, which began in the afternoon with a mold workshop and ended early Sunday morning when the furnace was finally hosed down with cold water.