The fate of our American food system was the topic of a lively discussion Tuesday night, July 23, at Fovea Exhibitions in Beacon. In front of a sold-out audience, Kathleen Frith, President of Glynwood Farm in Cold Spring, led a Q-and-A with Wenonah Hauter, Executive Director of Food & Water Watch in Washington, D.C., about Hauter’s new book, Foodopoly: The Battle Over the Future of Food and Farming in America (The New Press, January 2013). 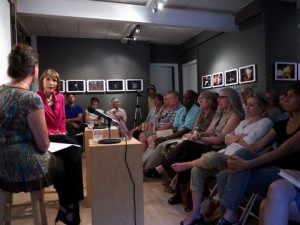 Apropos of a subject that is close to many Hudson Valley residents, Frith opened the discussion by reading a passage from John Steinbeck’s Grapes of Wrath: “And it came about that the owners no longer worked their farms. They farmed on paper; and they forgot the land, the smell, the feel of it, and remembered only that they owned it, remembered only what they gained and lost by it.” She chose this quote because it “best sums up the stark picture Wenonah paints in her book.”

For example, 20 food corporations produce most of the food eaten by Americans and only four large chains control most of the grocery stores where we interact and purchase our food. To best understand how we got to this point, Hauter explained, “These companies, over the past 40 years, have gained so much political power that they’re really dictating food policy – regulation and legislation that affects the food that we eat.”

“What I tried to do in Foodopoly really isn’t to be a big bummer about how terrible our food system is, even though I know it is discouraging to people,” she told the audience. “I wanted to show why it’s important to care. The control of large companies over our food system is a metaphor for our whole society. We have a lot of problems with policy and with just a few companies controlling almost every industry.”

In her book, Hauter chronicles the history of the food industry from the turn of the century through our current presidential administration. Through stories supported by facts and statistics, the 343-page hardcover book tackles government deregulation, food safety, free trade, anti-trust laws, factory farming and cruelty to animals, diet-related illnesses, and the consolidation of our food chain, among other pertinent issues.

Mostly taken for granted in this region as a viable alternative, organic farming and CSAs (Community Supported Agriculture) present a paradox within the larger context of a competitive marketplace. Only farmers who live in close proximity to population centers have a way to sell directly to consumers – two thirds of all U.S. farms are rural and therefore rely on a consolidated distribution network. Organic food is now controlled by some of the largest food companies in the world, weakening the standard. “Once they catch on, consumers will not be willing to pay a higher price so that profits can be siphoned off to earnings of multinational companies that have no commitment to the spirit of organics,” writes Hauter.

In answer to a question from the audience, there is hope and Hauter believes it can be found in food activism and the successful grassroots movements that are taking place today. The 2008 documentary film, Food, Inc., is cited in her book as playing a major role in engaging people on food issues. The film’s director, Robert Kenner, is now working on a multi-media social action project called “FixFood” that will identify available solutions. When asked her opinion of California’s “Just Label It” campaign (Proposition 37), she thought that, although the measure was ultimately defeated, it was “wildly successful” for raising awareness across the country and spurring a movement to label genetically engineered food.

She praised college students who are working with their food service providers to organize more locally sourced food. “Young people really want to fight for the kind of world we want in the future. They’re interested in a more vibrant democracy. To me, if we’re going to fix the food system, we have to fix our democracy.”

In addition to her duties at Food & Water Watch, Hauter owns and operates the organic family farm in northern Virginia where she was born and raised. From 1997 to 2005, she served as Director of Public Citizen’s Energy and Environment Program and, before that, as environmental policy director for Citizen Action and as a senior organizer at the Union of Concerned Scientists.

Glynwood, a working farm, is dedicated to sustainable agricultural practices, and produces food for the local community. Frith, president at the 225-acre property since 2012, has produced a number of award-winning reports, and serves as an adviser for several environmental and community organizations.

The evening was part of a series of panels and events, produced by Fovea Exhibitions, that are designed to provide a localized angle to the national and international topics addressed in their photo exhibits. Their next panel will be on Saturday, Aug. 10, in conjunction with their current exhibit, “The Gun Show.”