The Asian longhorned beetle made its way to our shores in packing material and started wreacking havoc on our trees in 1996 when it was discovered in Brooklyn. It’s native to China and is considered an invasive in the U.S. because it doesn’t have any natural checks like disease or predators that keep the population in balance. 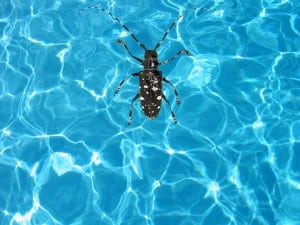 By boring into hardwood trees like maple, elm, birch and ash, the feeding tunnels of the larva damage the phloem and xylem of the tree, basically starving the tree and eventually killing it. Once the beetle gets into a tree, there isn’t any way of stopping it or treating the tree. The tree must be destroyed to prevent further infestation to other trees.

In May, the New York State Department of Agriculture declared that Manhattan and Staten Island were free of this beetle and a long-term quarantine on moving any wood from those areas was lifted. The beetle can cause devastating losses to industries that rely on hardwoods and disrupt entire ecosystems, as well as lead to tree loss in home landscapes.

New Jersey declared victory over the Asian longhorned beetle in April of this year and Chicago has successfully eradicated it as well. Massachusetts and Ohio still report infestations that are being managed with quarantines and removal of infected trees. In 2007, New York City cut down more than 10,000 trees in Staten Island to control an infestation. It’s heartbreaking to imagine the impact this beetle could have on our heavily forested community. 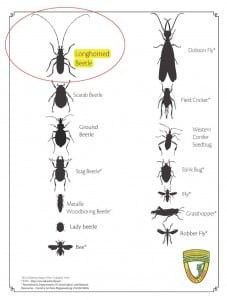 Vigilant monitoring can catch the Asian longhorned beetle before it takes hold and the New York State Department of Environmental Conservation has launched their second annual effort to engage pool owners and any willing observers in a campaign to track down any that appear. This is the time of year when the insects emerge from trees and can be spotted. Pool skimmers are great catch basins for all types of bugs and it’s a smart move for the DEC to reach out to pool owners to be a front range of defense in monitoring.

Anyone, regardless of access to a pool, can join in and be a volunteer. The campaign runs through the end of August. All you need is an email address, a digital camera (think smartphone), and a willingness to look around and send images to the DEC over the next month while the beetles are active and visible. Photos can be sent to [email protected] once a week.

Bag any beetles you think may be the Asian longhorned beetle and keep them in the freezer until the DEC responds with a positive or negative confirmation. Based on the photo, if the DEC thinks that an Asian longhorned beetle has been discovered, they’ll ask for the specimen to be sent in or arrange for collection for further study. Keeping it is essential to a positive identification.

In 2011, the DEC worked with municipal pools, hotel pools and campground pools as a monitoring method and inspected more than 3,000 beetles in their lab without finding any. This is the first year there has been a widespread effort to engage citizen scientists. Jessica Cancelliere, an entomologist with Forest Health at the DEC, said, “One of our best tools in early detection of invasive species is the “more eyes in the forest” concept. We only had ten volunteers last year, but we didn’t publicize the effort. This year we did a press release and we have 200 volunteers so far and the list keeps growing.” She reported that an Asian longhorned beetle has already been found in Long Island this year and they’re waiting for further confirmation.

Set aside some time to check the trees in your own yard this month and keep your eyes open when you’re on a hike. Vigilant monitoring can mean the difference between a healthy forest and a clear-cut hillside because trees have to be removed. Sign up directly on the DEC’s site to get regular updates and be a volunteer. Let’s keep Philipstown trees free and clear of this invader. Visit the U.S. Department of Agriculture website for more information