Five-year-old Zane del Pozo can probably outrun you. There are two reasons why: he’s very speedy, and he really wants to win. 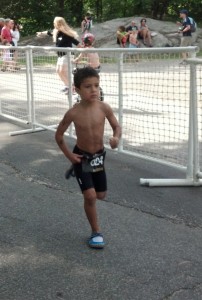 Zane del Pozo running away with it at the West Point triathlon.

The Nelsonville kindergartener just capped off a four-event TOUGHKids Triathlon Season by earning second place in a field of 115 boys and girls in his age group (4 to 6) at the TOUGHKids Championship held on Sept. 7, at Croton Point Park. In his best event, running, del Pozo ran away with the 100-yard dash.

His biking wasn’t too shabby either. There’s no doubt he will be training to improve his admittedly “hardest” event, swimming 20 yards, next season.

Zane’s dad, Brandon del Pozo, learned of these competitions, held in conjunction with the TOUGHman Triathlons for adults, and thought that Zane might find them fun. In his very first one, a year ago, Zane surprised his parents by finishing second in the run.

“He displayed a talent we hadn’t noticed,” says Zane’s mom, Sarah Carnevale. So, this year Zane did the circuit, participating in events at Ridgefield, Conn., Boston and at West Point, along with the Croton championship. He earned first or second place in each one of them. 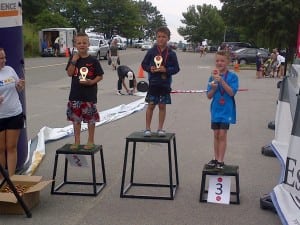 According to Zane, “it’s fun, and I’m proud of myself.” After an explanation of what the word satisfied meant, Zane pronounced himself just that, of his achievements. His mom seconded these thoughts: “I’m very proud of him. I’m really impressed how hard he pushed himself.” She knows of what she speaks, having participated in two triathlons herself.

Zane noted that he does play other sports as well. He listed these as soccer, skiing and “shoveling the snow.” Asked if he intended to keep on running, and perhaps one day become a member of one of Haldane’s track teams, he said yes, though the team should be warned about a future pacesetter: “I’ve seen them — they run slow, just jog,” he observed. 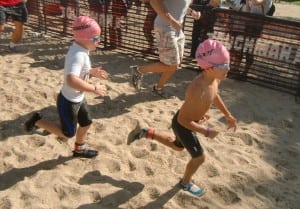 Zane del Pozo, right, heading from the swimming to the biking component at Croton’s  TOUGHKids Triathlon.

Next year Zane moves up into an older age division (the athletes are grouped by the age they will turn during the calendar year during which the race is held), but he’s not intimidated at all. Plus, there may be another runner waiting in the wings: Zane’s younger brother, 16 months old, who was showing off his climbing skills, scaling the furniture during this interview.

“I will train him; I’ll be a good coach,” Zane said, adding, “because my dad trains me and he’s a good coach.” In the meantime, look out for the speedy guy tackling the course in October’s Castle to River Run event sponsored by Philipstown Rec — but be warned: if you blink, you might miss him.