They want to spend the winter in your home

There’s nothing like a blaze in the fireplace in the autumn. It’s that in-between phase before it’s necessary to turn on the furnace and the warmth feels cozy. Earlier this month, I discovered that the fireplace in my home was also a cozy home for stink bugs. Not so nice.

The Brown Marmorated Stink Bug or BMSB is looking for a place to spend the winter right now. Any cracks or crevices indoors make snug beds for these aptly named invaders. Stink bugs are like the skunks of the insect world. They can emit a nasty scent when they’re disturbed so forget about picking them up or squashing them unless you’re ready to live with the consequences for a few days. I’m no stranger to stink bugs. 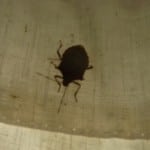 Last year they ruined most of my tomatoes. Every day I’d find them covering the fruit. A group of juveniles, they look different than mature stink bugs, round and brightly striped, were feasting away and I wasn’t. Pesticides weren’t a choice so I resorted to picking them off the plants wearing disposable latex gloves and drowning them in soapy water. Good times.

The BMSB was first found in the United States in the early 2000s and now has been reported in 43 states. In the HudsonValley, stink bugs showed up in 2008, which is why it may not seem familiar yet. We have a native stink bug that’s green and doesn’t present the same kind of threat to crops and sanity.

As of yet, there aren’t any controls to eradicate the BMSB. Native to Asia, it probably arrived here in the same way that most of our invasive pests show up, by hitching a ride unnoticed in shipping containers. While some destructive invasive insects can be contained with quarantine borders, the BMSB can fly and find hospitality just about anywhere in the U.S.

Without any natural predators or pathogens, the stink bug is thriving and has become a serious threat to crops. It finds hosts and food on hundreds of plants and trees, but particularly enjoys fruit-bearing varieties. Apples, pears, and soybeans are some of the crops that have been damaged in New York. The apple and wine industries in New York are particularly vulnerable to stink bug damage.

While stink bugs are a nuisance, keep it in perspective that they don’t bite, carry diseases or damage our homes and respond accordingly. To manage them indoors, the first step is to keep them from getting in. Seal gaps and cracks to create a barrier. If you happen to use the fireplace one evening and discover a dozen in the living room, use a tissue or paper towel to capture them, not bare hands to avoid getting sprayed.

They aren’t especially fast-moving and can be easily picked up. Then, the fun part comes. Flush it, catch and release or maybe just toss it into the fireplace? Squishing isn’t recommended because you might end up with the bad smell on your hands anyway. If you must release a live stink bug back outdoors, just remember that it will ruin your tomatoes next summer but if you can sleep more easily, so be it.

Pesticides used outdoors aren’t very effective since there are many possible entry points and they lose their effectiveness quickly. An exterminator can give advice on treatment.

Once the stink bugs are inside, they look for crevices and crannies to hide in. They’ll slip into the gap between the baseboard and the floor or the tiny spaces around molding and won’t emerge until a sunny day in winter coaxes them out for a breath of fresh air or when the days get warmer in spring.

Fogging pesticides released indoors aren’t recommended. They will only kill the stink bugs that are directly in contact with it, not the ones hidden away, and the dead bugs attract rodents and carpet beetles that will feed on them. Using a vacuum to collect them can leave the odor in the vacuum afterwards.

Since this is Roots and Shoots, of course there is a citizen science angle. Rutgers University in New Jersey wants samples from any state for a DNA study as they search for ways to eradicate and control it. Check their website for more details.