After 17 Years at DFL, moving on to Kent Library

Carol Donick, Desmond Fish Library Director, will leave her post in Garrison for her new job as library director at the Kent Public Library, effective Dec. 2.

“Carol’s tenure has been a storied chapter for us at Desmond-Fish,” said Hamilton Fish, President of the Library’s Board of Trustees. 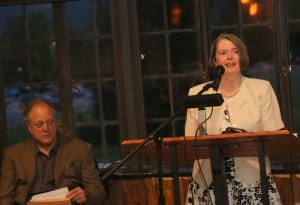 Fish underscored Donick’s accomplishments in Garrison. She oversaw digitization of the library catalogue, helped integrate the library into the Mid-Hudson library community, including the popular inter-library loan service, and brought the library into the digital age while remaining attentive to the more traditional needs of the patron community.

“Carol has worn many hats, including several hard ones,” Fish commented, a reference to orchestration of the installation of the elevator, complete overhaul of the downstairs program area following extensive flooding from Hurricane Irene, and the more recent renovation underway of the Children’s Room.

“We’ve put a lot of time and energy into maintaining our plant,” said Donick, “but it’s the building after all that shelters the collection and the people who use it, and the many bricks and mortar projects have been an appropriate priority.”

Working closely with the board, she has administered the library’s environmental efficiency initiative to upgrade facilities, and has developed the current project to replace the outdated HVAC system. Donick has also been instrumental in initiating the referendum the library plans to bring before voters in the Garrison School District next spring.

Donick expressed gratitude for the welcome she received in Garrison and continued community support. “I’ve loved my time here,” she said. “I’ve had the seamless support of the board, it’s been a great partnership, and I’ve had the privilege of working with a wonderfully talented staff.”

As to future plans, she said, “Every library director’s career is made up of chapters. I’ve enjoyed working at Desmond-Fish for many years, I feel now is a good time for me to embark on my next assignment, at a slightly larger institution with a different set of challenges. But part of my heart will always be here in Garrison,” she added. “I’ll help with the transition to the next director, I’ll be back for the amazing Associates Dinners and I’ll probably slip into the book sale ever hopeful of finding a treasure.”