Continuing to engage students in the compelling aspects of science can present challenges as children turn from the wide-eyed wonder of their earliest years into young adolescents bogged down in the volume of factual learning, underexposed to the conceptual and experiential side of science.

This Putnam Children’s Discovery Center’s table was all about birds, eggs, and feathers.

MAD Science Week, which took place (Jan. 13 through 17) at Garrison Union Free School (GUFS), was designed to stimulate, entertain and fascinate kids of all ages in the school, and infuse science throughout the week rather than just during their daily science period. The “MAD” component stands for Moms And Dads Doing Science, and indeed, that is the driving force behind the week: bringing moms, dads and other community members in to the school to conduct experiments, give talks and otherwise engage students in science.

According to MAD co-chair GUFS parent Marilyn Walker, who has been involved with the program since its inception:

It is the GUFS PTA’s effort to replicate the PARP program (Parents as Reading Partners) for science. Jeanne Khuns, GUFS speech pathology teacher, came up with the name, and Lisa Mechaley served as the PTA chairperson for the inaugural event in January 2012, really giving shape to what it has become. We schedule the program in early January as a way to prime the pump for the science fair that follows in late March. Our goals are to 1) get kids and parents excited about science, 2) get kids thinking about science projects and science careers, and 3) invite parents and other community members into the school to do science and celebrate science.

Similarly to other years, the week began with two assemblies. The first, on Monday, brought in a Franklin Institute Traveling Science Show, Flight, in separate presentations, one for grades K through four, the other for five through eight. The science concepts explored included air pressure, (the big hit was a home-made rocket), forces of flight and aviation history. A pre-show description provided read: “From Leonardo da Vinci to the space shuttle, explore the exciting history of flight. Investigate the Bernoulli principle, and learn how airplane wings provide lift. Mechanical birds, hot air balloons, gliders and even a rocket launch are used to demonstrate the forces of flight.”

Tuesday’s assembly, directed at the middle school grades, was presented by Dr. Radley Horton, billed — perhaps for the first time — as “climate scientist, Columbia University and NASA’s Goddard Institute (and Leo’s dad!).” One of the leading climate scientists in the world, he shared his research on climate change with the students and challenged them to be curious and hopeful about the future. 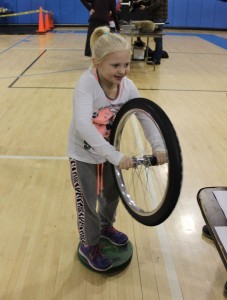 Principles of physics are contained in this wheel.

Every day at lunch during MAD Science Week live webcam science broadcasts were shown and students were able to watch NASA live TV; a shark tank, and a microscope view of a drop of water and all the organisms swimming in it. 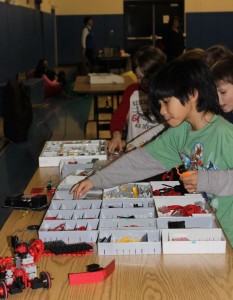 A possible engineer-to-be mulls over his many choices.

Thursday night was MAD Science Evening, the culminating event, with activities taking place all over the school with hubs in the library and gym. Celia Barbour (who contributes the “Mouths to Feed” column to The Paper each week) and her cooking team were a big draw. This year they served beef stew, mashed potatoes, and Vera’s doughnuts in the cafeteria to start the evening. Barbour expressed how grateful to Glynwood she was for providing the beef at a cost that “made it possible to feed meat that was raised well and on pasture right in our own community to 210+ people.”

One gains a sense of the breadth of what science can include in Walker’s description of the goings-on of the evening:

Presentations and hands-on exhibits in the gym and library begin at 6:30 and are supposed to end at 8 p.m., but the line this year for Dr. Peter Gergely’s electrocardiogram station did not wrap up until 8:30! Dr. Willie Yee and Joe Macagne of the Mid-Hudson Astronomical Association came back for their third year to lead an army of telescopes in the wildlife garden courtyard. Michelle Arcigal of SkyBaby Yoga Studio got kids and parents exploring the science of stretching and breathing.

The Garrison School Wellness Committee had a table with good reading and great tips about how to understand and address food allergies. Putnam Children’s Discovery Center featured two popular presentations: one on dinosaurs, and the other on birds, feathers, and eggs. Dr. Ed McGowan of the Bear Mountain Zoo brought some of his radio telemetry equipment to demonstrate how he does wildlife research. Mark Tatro, O’Neill High School chemistry teacher, provided the ooh and aah by lighting various chemical compounds on fire to produce colorful flames.

Middle-school students manned the video stations in shifts to answer questions and share their adventures in mythbusting. Mr. [Kevin] Keegan, GUFS middle-school science teacher extraordinaire and co-chair of the MAD Science committee, invites the students to propose various myths they would like to prove true or bust, and then in teams of three or four they establish experiments and carry them out. Jenny Evans and Liz Convertino worked with the students in the filming and editing phases.

This year’s myths included: can you explode your stomach if you eat pop rocks and drink soda?; can you walk on water (water mixed with cornstarch to make ooblek)?; can you put a pencil through a balloon without popping it?; can you crush an egg with your hand?; can you pull apart two interlaced phonebooks?; can you eat seven saltines in one minute without any water? To see the videos and see if the myths get busted, go to the PTA website where they are posted: gufspta.org.

Members of the O’Neill Science Club participate at their ”Cloud In A Bottle” condensation demonstration table.

GUFS Principal Stephanie Impellittiere is an enthusiastic supporter, calling MAD Science Week “an excellent way to help children think more about science. It encourages them to inquire, investigate and analyze how things work and why things happen. The time set aside during this week is also a great way to welcome parents into our classrooms and to continue the great relationship we have with our PTA, our school parents and all of our volunteers. We appreciate all the work that goes into this special event and thank all who participated.”