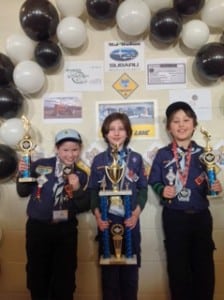 The Pinewood Derby is a racing event for Cub Scouts who, with the help of their parents, have built their own cars from an official kit that includes a block of wood, wheels, and nails (axles). As long as the car fits the required measurements and weighs no more than 5 ounces, the design is up to the boys’ imagination.

The Scouts of Pack 137 had an abundance of imagination and created cars that looked like the Hogwarts Express from the Harry Potter series and a medic truck with Indiana Jones atop the cab. Others were inspired by the Minecraft video game, or the Arrow of Light Award and one reflected Scout rank with a 3-D Tiger Cub in a jungle diorama.

The races are held on a wooden track, built and donated by craftsman Tony Yannitelli, which features a computerized timer. Each car races in five heats and the winning times are computed for each Scout rank plus the overall winners for the Pack. Additionally, the siblings’ cars compete in their own race.

Jude Columb of the Bear den took first place overall with his Yellow Submarine car. Second and third place went to Gael Frezza and Jordan Albertson, also of the Bear den. All of the participating Scouts worked hard on their cars and showed good sportsmanship during the race.

Families of boys now in kindergarten through fourth grade who are interested in joining Cub Scouts for next year should contact Assistant Cubmaster Tom Campanile at 845-475-8795 or Cubmaster Gary Gunther at [email protected].