McGuire’s On Main, the gritty neighborhood pub at the corner of Main and Stone Street in Cold Spring, will serve its last beer in the wee hours of May 31. Shaun McGuire, who owns the bar along with his sister Mandy McGuire, said that their lease is not being renewed. McGuire said he was given no reason for the action. George Duncan of Nelsonville, co-owner of the building, could not be reached for comment. 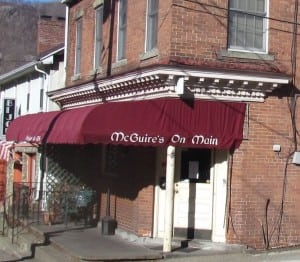 McGuire’s On Main will close at the end of May. (Photo by M. Turton)

The McGuires took over operation of the former Downtown on Dec. 1, 2005. McGuire is emotional about leaving behind 54 Main St., a historic building that has served as a bar for some 150 years. In a recent Facebook post he said in part, “I’m not gonna lie … it hurts like hell … but I can’t help but feel blessed by what I’ve had.”

While unhappy about closing, it seems likely McGuire will end up back in the bar business.

“I’ve already got several leads on a few locations, one in Cold Spring, several in Peekskill, and one across the river,” he told The Paper. He said his sister is less sure what the future holds for her.

Asked about Cold Spring’s strengths as a locale for a bar, McGuire said, “It’s the residents themselves. By and large, what keeps a business going (here) when tourist season is over is the regular crowd — my everyday guys and gals who are with us whether it’s 72 degrees outside and sunny, or 12 degrees … with a foot of snow.”

McGuire is clear about his best memories. “Hands down, the Wounded Warrior fundraisers (have been) some of my proudest moments. The money raised is always forefront, but knowing there are other people out there … who support these causes … restores my faith in humanity.” Over the last several years McGuire’s On Main hosted an annual party with proceeds going to the Wounded Warrior project, an initiative that supports veterans injured while serving in the military.

Never at a loss for words, McGuire didn’t hesitate when asked what has mattered to him most about running McGuire’s On Main. “Don’t even have to think about that one,” he said. “It’s the friendships I’ve made … (they) are the most valuable thing I will take away from running this bar.”

The bar has been the site of numerous parties — from celebrating regular customers’ birthdays, St. Patrick’s Day and the annual Army-Navy football game to Halloween costume parties and the annual “Inappropriate T-shirt Contest.” The closing will be no different. “We have to vacate the 31st, so the day before, Friday, we’re going to give it one last go,” McGuire said. “I’m sure there will be a few beers, cheers and tears.” He said he and Mandy “are just going to rub elbows” with customers while a number of familiar faces will serve as guest bartenders.