Live auction planned for May 10

Those who have lived long in the Garrison/Cold Spring area will remember Cold Spring Lumber on the Hudson River at the bottom of Main Street in Cold Spring, New York. There may be those who also remember a young man who worked there and talked mostly to customers about his artistic pursuits and dreams. Donald Jurney’s dreams have come true. 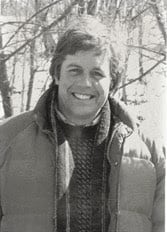 Donald Jurney in 1981, the year he founded Artists on Location

More than 30 years ago Jurney began his career with a one-man show at a temporary gallery space in The Hudson House, in Cold Spring. A group of prescient collectors bought up the paintings at prices from $50 to $200. Since then, through many subsequent one-man exhibitions, the reception has been the same — sold-out show after sold-out show.

It was the success of that first small show at The Hudson House and Jurney’s involvement at Garrison Art Center that in part provided him with the momentum to move forward into what is now a successful career as a noted American painter with works in numerous private and public collections, and as a sought-after plein air instructor.

In 1981, Jurney founded Garrison Art Center’s popular Artists on Location, now known as The Riverside Art Auction. It is believed that Garrison Art Center’s auction was the first “wet paint” auction anywhere, certainly in the Hudson Valley. Hundreds of organizations have “borrowed” the idea since then. At this year’s live auction on May 10, Garrison Art Center will honor the artist to acknowledge what he has done for the ArtCenter and to celebrate his happy career.

In addition, Jurney is offering a painting at The Riverside Live Art Auction. The large painting (60” x 50”) completed in 2014, is inspired by the Hudson River School, a style for which Jurney’s past works are known, but is a rarity in his new work. The not-yet-titled painting will be titled by the winning bidder, with the artist’s approval. The actual painting can be viewed by appointment at Garrison Art Center.

The Riverside Art Auction benefits Hudson Valley artists and Garrison Art Center. It is scheduled for May 10, with a viewing reception at 3:30 p.m. The Live Auction will begin at 5 p.m. and feature works by 50 invited Hudson Valley Artists. Again this year the auction will be led by the lively and charming auctioneer Nicholas Lowry, a regular on Antiques Road Show. A sunset picnic will begin at 6:30 with a menu by Pascal Graff, owner chef of Le Bouchon on Main Street in Cold Spring. In addition, The Riverside Galleries will feature more than 100 works in the Silent Auction, which will remain open on May 10 until 8 p.m. The Silent Auction will run through May 18, at 5 p.m. (The gallery will be closed Monday, May 12.) Bids may be made in person or by calling the Art Center at 845-424-3960.

For more information on the Riverside Art Auction and to purchase picnic tickets visit garrisonartcenter.org or call 845-424-3960.

Jurney’s work is firmly rooted in the great landscape tradition, stretching from Dutch 17th century painting through the Barbizon and Hudson River Schools, to late 19th and early 20th century French and American impressionism. Nonetheless, one cannot mistake the evidence that his work is also informed and enlivened by the influence of modern painting. It is this union, one of timeless motif and of lively surface, that distinguishes his work from both his predecessors and his contemporaries, making his paintings very much of our time, and instantly recognizable. 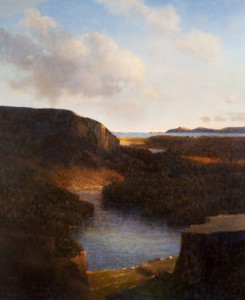 A painting by Donald Jurney (photo by Lori Adams)

Particularly in the period between 1870 and the famous 1913 Armory Show, landscape painting dominated the world of art. It engaged the viewer with contemporary views of the world while exploring the intersection between man and nature. With the arrival of modern painting this conversation was abandoned, cast aside in favor of a formalist investigation of the nature of painting itself. With few exceptions, such as the work of Fairfield Porter, landscape painting lay virtually dormant for 60 years, until the 1970s.

Running counter to that belief, Jurney was committed to the view that understanding our relationship to the places around us, having ‘a conversation’ with our precarious world, was more important than ever before. He continues to believe that we grow in richness as we train ourselves to perceive the subtleties of the land, both in its timelessness and in its ever-shifting vitality. Jurney invites us to explore what Patrick Kavanagh has called “the undying difference in the corner of a field.” His paintings are a summons to celebrate the poetry of the commonplace.

Jurney’s work, like that of many of the masters he respects, begins with pencil drawings in the field. Exploring the particulars of a chosen place, he carefully records the information, which he will later need in the studio. Sometimes several years will elapse before the drawing becomes the motif for a new painting. In the studio, from his deep understanding of the vocabulary of nature, coupled with a keen sensibility and great skill, comes a painting with the indelible stamp of a certain day and hour, of a particular weather, and with a unique sense of place.

At first glimpse, his work is profoundly based in traditional landscape painting. But a closer look reveals that the tree, which we see as millions of leaves, is, in fact, a dense matrix of quite random marks, combining to give the impression of great detail. Through great economy of means, Jurney invites the viewer to enter into a compact with him, one in which the language of painting becomes as important as the subject of the picture itself. Our reward is the pleasure of a traditional realism that is refreshingly, and surprisingly, animated by the vigor of abstraction.

Donald Jurney has lived and worked in the Hudson River Valley, in England, and in the Berkshires. For a number of years, he has painted extensively in France. A recent interest has been kindled by a trip to the West of Ireland, and he has begun exploring the coastal marshes and the estuaries of Boston’s North Shore. But wherever his travels take him, one can be sure of an invitation to come along, through his paintings, and of the chance to share his unique vision of the landscape — inspired by his unflagging enthusiasm for the remarkable world about us.

Donald Jurney was born in Rye, New York, and was educated at Columbia University, the Pratt Institute, and the Art Students League.