Shelley Boris says there was always a cookbook inside of her, but she resisted because “there are so many good ones already out there.” 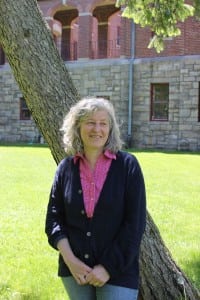 The book, which groups recipes in a seasonal chronology, provides three menus per month, each containing at least five distinct recipes. Boris calls it “my personal style, based around the meals I made here at the institute and how they relate to the cooking I do at home and all the other independent catering I have done.”

Boris feels that “to cook well you have to make something you like yourself. Also you have to know who you are cooking for and try to offer them a cohesive meal.”

Cooking for the Garrison Institute, a center for contemplative practice and retreats, meant adjusting Boris’ style, something mirrored in the book:

Because there is a lot of sitting, writing and other cerebral things going on here the nature of the food here is lighter. But at home I love meat and fish, although I was always the person who liked the gravy and side best — I liked the flavors more than the meat itself. Each recipe includes notes and variations. The book extracts and simplifies, broadens and distills, and is scaled to family size. Servings can also be multiplied and don’t have to be made a la minute.

I adore modernist food. I love to go to complex restaurants. But here the meals feel more like home cooking, institution-size, using a lot of vegetables and meat mixed in or off to the side … I combine local and non-local, for affordability. Not everyone gets to travel and those preaching local foods often do have the means to do so. If you, for instance, use saffron from Spain, it’s transporting and there’s no reason not to use it, as much as I love to support local growers and products. Also most spices come in handy and make inexpensive ingredients more delicious — for example using cardamom with cabbage.

Food as a career was not part of Boris’ original plans. Though she grew up in a food-suffused household, her first love was art.

“Mom was a good cook,” she recalls. “She grew up in Patterson, New Jersey, where there were lots of Polish markets, even a roasted-peanut store — she had a good palate. We were the kind of family where we’d time going out to get our corn so we could put it right into the pot.”

After attending art school at Alfred University, Boris got a job at an ad agency, but found herself “too idealistic for commercial graphic design.” She shifted to a job at the then-nascent Dean & DeLuca culinary emporium in SoHo, supposedly to help pay the bills while she attended Hunter College, studying painting.

“But I kept being given more and more responsibility at Dean & DeLuca,” Boris said. “I was made manager and it was an exciting time, experiencing a lot of imported things for the first time, authentic foods, learning about growing seasons. New York City is not necessarily the most original place in terms of cooking, but it definitely has the most access to things. I wound up trying olive oil from small towns in Tuscany and planting fingerlings on the North Shore of Long Island, trying a million cheeses. New ingredients were exploding all over.”

Nevertheless, back then Boris still thought “doing food was lowly compared to being a painter. I had a hierarchy in my head: ‘artist / oceanographer / doctor OK, steamy dishwasher smells not OK and I will never work in a kitchen,’” she says with a laugh. “But it was a time when art, music, dance and cooking started coming together, and I left Dean & Deluca and got a job in a Mediterranean Tribeca restaurant called Exile, working for a talented chef … Mediterranean is my deepest comfort zone. I stayed on there and no longer thought about a career in art. I found the kitchen more entertaining than a painting studio. I love that it usually contains people of different ages and genders and has people who have been professionally trained and others who are self-taught — it’s a trade.”

After Exile closed, Boris moved on to a catering company. “I also worked doing food styling and other random things and spent a transformative summer in Morocco — I also ate out everywhere.” Eventually, after giving birth to her first son (he just graduated from college), despite wanting to open a restaurant, she knew it was not possible with a baby. She returned to Dean & Deluca, opening their first espresso bar among other endeavors. “I like working on the beginning of things,” Boris says. With her husband tired of city life, they decided to try Cold Spring, which they had seen on day trips. “In the beginning I missed the sidewalk under my feet, but eventually I asked myself ‘Do I really want to go back?’ and the answer was ‘no.’”

Soon after moving, Boris found herself in a commercial kitchen again, this time opening the first restaurant at The Garrison, at the invitation of owners Chris and Sharon Davis. Boris also helped with Highlands Country Club and then the Davises connected with Jonathan and Diana Rose and Boris found herself with a position at Garrison Institute, developing their food program. “It’s great to be cooking here. It’s an incredible building, with all its history, such a beautiful location, and the institute has such good taste and good vision. It has also allowed me the opportunity to think about policy, philosophy, to be on panels. This place is thoughtful.” 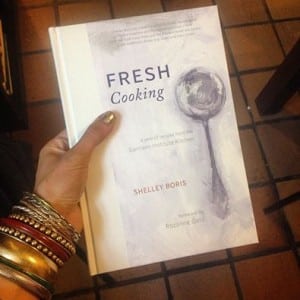 Around the same time, after playing a large role in getting the Cold Spring Farmers’ Market up and running as a founding board member, she started Fresh Company, which does private catering and runs the café at Storm King Art Center. Boris increasingly finds herself “doing a lot of business stuff now — I don’t get to cook as often. I do menu development, the buying, all the recipes.”

“It’s time for me to embrace the business. It’s been an established business now for 10 years … We work with a lot of arts and environmental clients, largely advocacy groups with visions and missions. It’s really great to work with them because of these missions, but it does make budgeting interesting since so many of them are under such constraints,” says Boris.

The idea of baking soup came to me when we ran out of stove-top space on a particularly busy day in the kitchen; it was a happy accident. When soup is baked in the oven with olive oil poured on top, a flavorful, thin brown crust forms on top that adds extra flavor. Garlic scapes are the flowering stem of the garlic, and they have a mild garlic flavor. Break off the woody end as you would with asparagus and eat as a vegetable. The touch of spring in the garlic scapes brings the lentils out of winter. This recipe calls for sliced sausage served on the side of the lentils, or see Notes and Variations below for poaching the meat along with the beans. Serves 6 to 8.

3 cups dried lentils (I like French green lentils a lot, but any variety is fine. The texture will vary depending on what you use.)

Preheat oven to 400 F. Place all ingredients except the sausage in an ovenproof 6- to 8-quart pot or casserole dish. Bake for 15 minutes, stir, and continue baking. Repeat this process, checking and stirring every 15 minutes, until the lentils are completely tender, about 50 to 60 minutes. Add water as needed, depending on the consistency you like. Remove the thyme branches and bay leaf from the lentils before serving.

Saucisson is semi-cured garlicky pork sausage that is fatter in diameter than a typical sausage and can be found at specialty food stores. Any mild garlic or sweet Italian sausage will substitute, as would spicier sausages such as merguez, semi-cured chorizo, or spicy Italian sausage. Other good meat variations include poached pork, lamb shoulder, or duck legs.

If you want to poach sausages right in the lentils for added meat flavor add saucisson after about 15 minutes; 30 minutes for thinner sausage. The sausages cook fairly quickly and become bland if you cook them too long, all the flavor goes into the broth. I don’t mind the tender long-cooked sausage in leftovers but on the first night it is good to cook the sausage until just 160 F, which takes about 20 to 30 minutes tops.

If you bake the lentils until most of the water evaporates the results are a thicker lentil casserole that you can serve over rice or polenta or with toppings such as chopped parsley, olive oil, or toasted walnut oil. Lemon wedges on the side are good with lentils as is fresh cheese on top.