Freewheeling, picaresque: as applied to a life these words describe the odyssey of Daniel Dens, a Belgian-born Pop artist working in the dual mediums of fine art silk-screen painting and sculpture, who has landed, by fortuitous chance, in Cold Spring after long stints in Venice (the California one), the Hamptons and New York City. In residence here just over six months, Dens and his wife, Maia Landau, a still-life photographer specializing in interiors and food, have set up an “atelier,” a 2,000-square-foot working and living space in what is a prototypically “artist’s dream” high-ceilinged expanse in a barn-like building just north of Vera’s Market on Route 9. 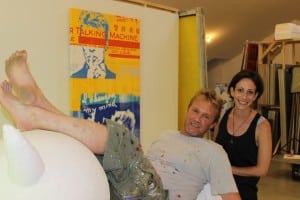 Irrepressible artist Daniel Dens with Maia Landau posing atop one of his sculptures and in front of one of his prints in his atelier.  (Photo by A. Rooney)

The atelier is home to Dens’ collection of canvases and works on wood, largely collages combining silk-screened images of iconic figures with text, all produced in vivid colors, which have that jump-out-at-you effect. Accompanying these, perched throughout the space are his playful sculptures, impish rubber duckie shapes with horns, and also piglets, rockets and the phrase La La La, emblematic of Dens’ go-with-the-flow philosophy. It’s also home to the equipment it takes to make these: racks of frames, unstretched canvases, a light table, a large printer and partitioned-off areas (mobile and constructed by Dens) which help break up and organize the space.

The paintings are a jumble of images: familiar and distancing at the same time: objects evoking music in earlier eras such as radios, microphones, vinyl discs and blow-ups of the spines of record album covers. There are people emblematic of the 60s Pop-era: Jean-Paul Belmondo, Jane Birkin, Sophia Loren, Brigitte Bardot, and earlier figures of influence — Marlene Dietrich, Albert Einstein, many more. For the past 12 years Dens has created and refined these works, in what has been a second career largely unrelated to his first, as a commercial diver, a career he abandoned as he aged out of it.

From West Coast to East

Dens’ story is almost fable-like. After ending his diving career he continued working in Venice, California, doing landscaping, grouting, and odd jobs. He often created copies of works by artists like Roy Lichtenstein for appreciative friends. He added collage elements, using Italian movie posters, and eventually started putting screens together, conceptualizing repetition. Artist friends, appreciating these works, suggested that art might be a better way for him to earn a living. He began selling his work, putting profits into purchasing more screens and other material. Feeling that New York City might be a better place for this career to truly take hold, he made a plan to move there.

“Something told me to go — that the possibilities might be greater,” Dens says. “It was spring and a friend and I had only enough money to drive to San Francisco and drop off a car. We stayed there for two months and then took a train across the country to New York. We arrived at the Jane Hotel with just enough money for one night’s stay there, with $20 left over. So we went to the corner of Spring and Greene [Streets, in Soho] with a few paintings and taped them on a wall. We made a thousand dollars cash that first day! It was a sign: New York, I love you, you love me. We paid a week of rent and as it was a room large enough to produce art in, bought canvases and put them up with push pins.”

Gradually the work, still sold on the street corner by Dens’ friend and business partner, grew more complex. “My partner stood out there for two years, winter and summer and the work wound up being picked up by a Dublin gallery, placed in a Ralph Lauren store and displayed in an exhibition at [advertising giant] Saatchi & Saatchi,” Dens recalls.

Moving out of the hotel, they landed in Williamsburg, Brooklyn, before being driven out by a leaking roof, to spaces further out in Brooklyn, with work now more “discovered” and landing in collections of many in the music industry, in particular, and displayed in European galleries. Dens started producing more seriously, securing a studio near the Pratt Institute, where “serious clients started coming and finally we were not actually living there, too,” he says.

Making art in the Hamptons

After a couple of years, on a whim, they decided to try the Hamptons. “Why not?” Dens said. “We thought, it’s just one road, let’s try street style out there.” Driving along they spotted a complex of brand-new buildings, all glass, empty. “We got out, looked at it, saw there was a sign with the owners’ information on it and called them … Elliott and Lou Meisel. They came over on a motorcycle. We had no idea that Lou was a legendary art dealer. I didn’t have a clue — I had no art education. I asked him if he’d like to see my work. He said ‘No.’ But I said ‘Yes, you’re going to see it, so I rolled them out. He thought they were pretty cool but said galleries don’t work out here. He asked me how much I was going to sell them for. I told him and he said, ‘You’ll do fine, and I’ll let you rent it on a week-to-week basis until I find real tenants.’” 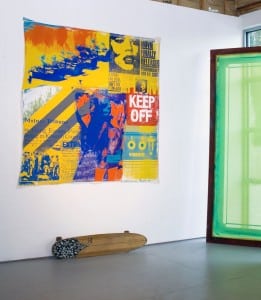 “Keep Off” by Daniel Dens (Image courtesy of Maia Landau)

It turns out that the buildings had been languishing, empty for a couple of years due to “local politics,” according to Dens, and were in just the right unfinished state for hanging canvases floating-style from uncovered beams. “Even before we opened the doors, people started coming, curious. I started selling out four or five times in one season. We wound up staying for almost three years, always under the threat of moving if there was a serious offer.” On top of all this Meisel gave Dens a solo show of his large-scale mural works at his New York City gallery, in 2012.

Eventually because of Dens’ “I like to move on” personality, he (actually by then a “they”) moved on, first to Long Island City and then, briefly, to Pennsylvania. While temporarily decamped there they started planning their next move. Although knowing nothing of the Hudson Valley, while gazing at Craigslist Landau saw a description literally “pop up, right then and there on the screen — literally 10 seconds after it had been posted,” she says. “It sounded perfect; we called and came to see it the next day; we moved here in November.”

Despite the harsh winter, which Landau calls “raw, grey beautiful,” they love their newest home. They have been extremely surprised by the thriving arts community here, which they have only just begun to tap into.

Along with maintaining relationships with galleries in Switzerland and with Meisel, Dens is currently exhibiting in the Hamptons again at the Montauk Beach House, through July 10. Dens and Landau are eager for interested people to come to the atelier and view work on site. Appointments need not be made far in advance — just try them and if they can facilitate a spontaneous or planned visit, they happily will. They are open to the public by appointment, and will be setting up open studio dates — contact them to be included on their email list. The atelier can be reached at [email protected] or by calling 917-288-0065. Visit danieldens.com for information and lots of images.