Former Cold Spring resident Thomas Earl returns to the area on Saturday, July 12, to make an appearance at The Pantry in Cold Spring. 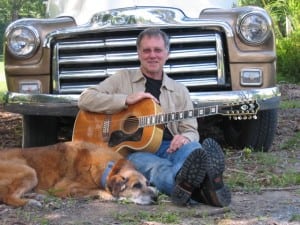 During Thomas’ last visit, he performed a tribute to James Taylor at the Depot Theater. His Pantry show will include many of those James Taylor songs, along with some covers by artists ranging from Neil Young and Sheryl Crow to Ray Lamontagne and Jason Mraz. Thomas will also be playing some original music from his two recent CDs, as well as some traditional bluegrass tunes on his newly acquired Gibson Mastertone Banjo.

Joining Thomas on the gig will be fellow Cold Spring resident and percussionist extraordinaire Mike LaRocco. Weather permitting, the show will be performed outside in the new patio area at The Pantry. There is a suggested $5 music charge for guests.

The Pantry is located inside Vera’s Marketplace and Garden Center, 3091 Route 9, in Cold Spring. The Pantry Friday Night Live Music Series is part of their weekly event schedule. Visit thepantrycs.com or call 845-265-2840.

Earl has been described as “…a gifted poet that has the ability to set it all to music in a beautiful and unforgettable way that few artists have the ability or insight to accomplish.” His CDs are available on iTunes and Amazon.com. Visit ThomasEarl.com.