As fall kicks into high gear, a new arts organization is re-energizing extra-curricular offerings for Beacon’s kids. In October, the Kingston-based Center for Creative Education (C4CE) will open a second location at 464 Main St. A full schedule of after-school and weekend programs emphasizes movement, performance and the visual arts.

“Nine times out of 10, the reason kids are getting into trouble is because they don’t have anything to engage them. Nothing structured, motivating or fun,” said Bryant “Drew” Andrews, Director of C4CE. “When I was young, movement kept me out of trouble. Dance and exercise were really important for me.” 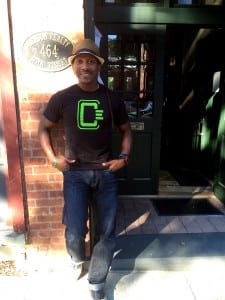 Drew Andrews, Director of Center for Creative Education, outside the organization’s new location in Beacon.

Andrews should know. A veteran performer, he is also trained in human services and counseling and has 20 years of experience working with youth, including as a corrections officer. Evry “Ev” Mann, a percussionist, composer and writer, founded the Center for Creative Education first in Stone Ridge, New York, in 1989. Their paths crossed 10 years later in Kingston, where Mann had relocated his non-profit organization and Andrews was operating his for-profit company, Unique Fitness.

They became business partners and, in 2003, they opened their current Railroad Avenue facility in Kingston’s Uptown district. In addition to organizing arts-in-education classes on site and in schools throughout the region, Mann directs the Percussion Orchestra of Kingston (POOK), with Joakim Lartey and Ruben Quintero, and Andrews directs the Energy Dance Ensemble.

Learning life skills through the arts

On Saturday, Sept. 13, C4CE will provide a sneak peek of the program schedule at an open house from noon to 5 p.m., beginning with a ribbon-cutting ceremony. The event will feature demos of each class on the schedule, plus performances by POOK and Energy. Mann and Andrews plan to recruit for Beacon chapters of both troupes, via auditions, once classes are in session.

“We had been looking at Beacon for years,” Andrews said. “We had a lot of kids coming to Kingston from this area, but we didn’t yet have the resources to open a facility here.” They signed a two-year lease this year where Beacon Yoga is located, behind Matteawan Gallery. Morning and evening yoga and meditation classes are still on the schedule.

“It is more important than ever to ensure all children access to art, music and dance education, to the disciplines that develop a rich interior life,” said Shannon Murphy, Beacon Yoga’s founder and C4CE’s program coordinator. “These are the natural complements to the spiritual discipline of meditation and yoga. Working with Ev and Drew is a joy.”

C4CE’s fall curriculum includes Music & Movement for children ages 1 and a half to 3 years; an intergenerational Drum & Dance class (Afro-Cuban and Brazilian), plus one for children ages 7 to 14 years; and Hoop, Tango, Hip Hop and Soul Line classes for all ages. Yoga for Toddlers, Kids and Teens will be held on Mondays.

Catherine Stankowski, a single mother of two, has lived in Beacon for five years. Her daughter and stepson currently take classes in Kingston, where their father lives.

“Beacon has good programs for kids but not a lot that a working mom can time-manage or financially afford,” she said. “What most excites me about the center is the genuine diversity of its staff, its board and the students, ethnically and socio-economically. No child is turned away.” She said that her kids will now take classes in both locations.

Stankowski’s former partner is on the Board of Directors of C4CE, which began discussions about a program in Beacon in earnest in March. “Even with the best intentions, starting from scratch is difficult,” she added, referring to some of the extra-curricular programs in Beacon that never gained much traction. “This kind of fast turnaround can only happen with an established organization. The center has the funding relationships and a proven track record.”

C4CE does not currently partner with any schools in the Beacon district, but Mann and Andrews have had preliminary discussions with the city’s Department of Recreation.

“Funding for arts education in schools has dried up but we still find ways to just do it. As a non-profit working in the arts, we have to serve both the community and families, to inspire and empower them,” Andrews said. “With everything going on in the world, we need that time together and this is going to be the place.”