There’s an ocean hidden away on a quiet Nelsonville Street. A sea where jellyfish abound, those umbrella-resembling plankton reproducing through the artistry of Carla Goldberg, who is creating a kingdom of them on Plexiglas in her studio at her home. Using ink and resin on glass, Goldberg’s sculptural drawings, each unique, have combined into a kingdom of marine creatures (not fish — jellyfish are actually plankton), in some ways abstracted, in others each with its own persona, fueled by Goldberg’s attraction to water, memory and shadow.

Together they will be displayed as the By Sea component of Gallery 66 NY’s October exhibition, It’s Only Natural in combination with a By Land component of animal paintings by Beacon’s Cynthia McCusker. 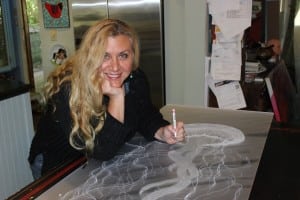 Carla Goldberg working on a 7-foot jellyfish design. (Photo by A. Rooney)

Goldberg, who, apart from her own work, also directs the Skylight Gallery in New York City and bau (Beacon Artists Union) in Beacon, calls herself a “perennial experimenter. As I’m working on a body of work I’ll see something that leads me to try something else; there’s always a kernel of a new idea.”

The something else has always been art-related, as Goldberg says she has known she wanted to be an artist since age four. With no available children’s art classes an adult YMCA class teacher was cajoled into letting her in. From that point on Goldberg took art classes throughout her growing-up years, first in Los Angeles, and then Palm Springs.

After starting college with the intention of studying medicine, fostered by her grandfather (she grew up in an extended family), she “realized after a year that even if I became a doctor I would be coming home to paint and draw — this is what I’m passionate about, I love every aspect of art.”

After her undergraduate studies, Goldberg headed east, earning her MA from the Maryland Institute College of Art, a program which, she says, “catered to experimentation; the only rule was that there ‘had to be paint on it somewhere’ — this allowed you to find your voice. There were weekly student critiques, all the studios were open so you could visit and see each others’ processes and have free dialogue.”

Moving to New York, her artistic path was altered by marriage, then a return of the cancer she first battled during her time in Maryland (she has been healthy since). She said:

I always felt like my art career was constantly delayed, even after getting healthy, as then I had kids, and when they’re little, they need your attention. So, I shifted my energy towards working on my house, but one day, when my husband and I were preparing to give a party I was painting sheets as a decoration, and it occurred to me as I was standing on a ladder, how happy I was. I got off the ladder and the very next day went up to my studio on the third floor of my house and I made myself go every single day for a year because it’s hard to start again. By then my older work felt dated, and I felt a little lost; I needed to get my skills back, so I started painting landscapes. I stopped working on my house then and there and now art has taken over my house!

Sculpting with light and shadow

For someone who grew up largely in the desert, that art has always been inspired by water. “In Palm Springs, I was only connected to water through pools and sprinkler systems, but I’d go on these long California coastline trips with my grandparents, and I always felt a connectedness to water.”

Returning to painting, one day Goldberg noticed a bottle of resin in a corner of her studio. With a bathroom floor needing repair, and feeling that she couldn’t live with just plywood Goldberg painted some lines and decided to seal it with resin. “It was beautiful, but too slippery, so I pulled out a hand-sander and over the four days it took, it made me think about resin, consider it. That was the beginning of the use of resin in my work and it’s all been experimentation, trial and error — I’ve taken no classes in how to use it. 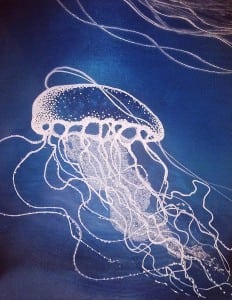 Close-up of a jellyfish design by Carla Goldberg. (Image courtesy of the artist)

She asked herself what would happen if rather than painting these on canvas, the drawings were done on resin. This became the first time Goldberg worked on a clear surface. “So, real life plumbing problems made changes in my art … It’s evolved since, but is always to do with water, memory, seeing structure but seeing through it, and shadows. I like to call them sculptural drawings; I’m sculpting with light and shadow.”

Goldberg starts with drawing first. “I get a basic structure going, then stop and think about what it needs on the other side,” she said. “I then flip and draw on both sides, and it’s not about effects, it’s more how to bring the piece to life.” Much of Goldberg’s material comes from local sources, the main being Cold Spring Mirror and Glass, whom she loves working with. Some is recycled, and others are end cuts.

The show at Gallery 66 will solely feature images of jellyfish of all sizes and shapes, each of a singular design and mood. Goldberg is currently working on a 7-foot jellyfish, who/which has temporarily taken up residence on her kitchen counter. The work is highly detailed and time-consuming as each “line” is actually a string of dots made with a superfine pen.

Goldberg does not work from photographs, but instead calls each “… an idea of a jellyfish. It’s not an exact memory, as it’s also based on composition although sometimes, real life doesn’t have the best composition. Each jellyfish is a surprise; no two are ever alike. The piece tells me what it needs — it’s a dialogue between the piece and hand/eye coordination, because there’s no erasing. This is an oil-based ink so if an accident happens, I have to work around it. These challenges though, often lead to the best pieces. You have to come up with a solution to deal with what just happened.”

In demand beyond labels

Goldberg’s art has been called both fine art and decorative. The description as decorative used to bother her, but no longer does: “If I’m enjoying what I’m doing, do labels matter? No,” she states. Whatever it is labeled, it is in demand. Her work is currently included in shows at the Museum of the Shenandoah Valley and at Denise Bibro Fine Art in New York City; future shows include the Beacon Shortwave Gallery in Stone Harbor New Jersey and the Chase Edwards Gallery in Bridgehampton, New York, and her resume is extensive. In Europe, she is represented by the Kunstleben Gallery in Berlin.

Goldberg also works on commissions, the latest being a giant, 30-foot mural for the Marriott Waikiki, three panels’ worth of ocean and jellyfish. 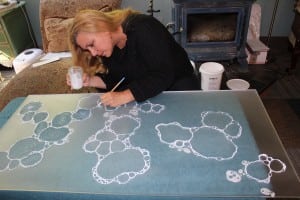 Carla Goldberg at work drawing on one of her ”Seafoam” series. (Photo by A. Rooney)

Wherever the work is shown, Goldberg is happy to call this area home. When she and her husband were searching for a place to live, “We came around the corner, saw the Hudson, and a rainbow, and knew we had to be here,” she said. “To be in a place where there’s a sense of history, and not an artificial one, but something so genuine and beautiful … I love seeing crooked floors, the marks of people having lived in a space before you — that’s why I fell in love with my house. I’m always conscious of a sense that we’re just taking care of it, until the next people come along. I love Beacon, too — the energy — and all of it just a short train ride to an amazing city.”

An opening reception for It’s Only Natural will be held from 6 to 9 p.m. on Oct. 3. The exhibition runs through the end of October. Gallery 66 NY is located at 66 Main St., Cold Spring. Visit carlagoldberg.com and gallery66ny.com.