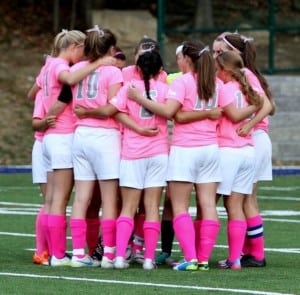 “Four games in five days with four wins in five days. That’s how championships are made,” Coach Gary Van Asselt said. “One day at a time, one game at a time.”

In the Hendrick Hudson game, Bailey McCollum scored three goals in the second half to add to Allie Monteleone’s goal scored in the first half.

At the 8th annual Bobcat Invitational on Oct. 11 in Byram Hills, Haldane girls finished second to win the small school championship trophy. Coach Tom Locascio stated: “We have had an amazing pack of three girls all season. They are always together and always near the front of every race. I have waited for two more scorers to emerge from a very capable pack all season.”

The top three once again won medals; Ruby McEwen finished 16th with a time of 22:01, Taylor Farrell 17th at 22:05 and Kate Phillips at 22:13. Heather Winne was next at 23:37 and the final scorer was Abbey Stowell at 23:42. Wylie Thornquist and Sophia Carnabuci rounded out the championship team.

The boys were down runners due to injuries; five ran instead of seven. “In order to field a team, I had to run an eighth grader and another boy in his first varsity race ever,” Locascio explained. The team finished 14th out of 24, with several running their personal best.

Individually, there were 177 boys in the race. Nick Farrell led the way medaling and finishing 22nd with a time of 17:20. Brian Haines crossed the line next at 47th, finishing at 17:57. Adam Silhavy ran in at 18:45, followed by Jake Howell and Peter Duffy at 19:57:00 and 19:57:09, respectively. Duffy, running in his first varsity race ever, shaved over 4.5 minutes off his time from last year. “Down four of seven of our best runners, those who are getting their opportunity are making the most of it,” Locascio said.

The Blue Devils conquered the Valhalla Vikings on Oct. 10 on their own turf by a score of 35-8 for their third consecutive win to bring them 4-2 on the season.

Haldane led 7-0 at the end of the first quarter and 15-0 at the half. The game ignited in the second half, as Coach Ryan McConville explained: “We played a better second half and it was sparked by Matt Balducci’s touchdown run of 94 yards on the first possession of the third quarter to put us up 21-0 for a 20-point gain for the quarter. That was a big momentum play for us. From that point forward we did a much better job controlling the line of scrimmage and getting stops on defense.”

Stephen Junjulas stopped an attempted touchdown in the final seconds on the Viking first yard line.

Haldane plays their last season game away at Dobbs Ferry at 1:30 p.m. on Saturday, Oct. 18.