Ebola, the ravaging disease that has killed 8,400 West Africans and threatened the viability of whole countries such as Liberia and Sierra Leone, has also spread a fair amount of fear in this country as well. Of late, we hear reports of perhaps a corner turned in the efforts to isolate the disease and prevent its spreading into even larger populations. But much more dangerous, challenging, at times desperate work still needs to be done.

What do we know of the people who do the frontline work of identifying and accepting patients, treating them and in many cases burying them, risking their lives in the process? One way to begin to appreciate the human dimension beyond the headlines and the dread is to view a new still photography exhibit mounted by the Fovea organization and hosted by Beacon’s Hudson Beach Glass in that emporium’s second-floor gallery. Fovea specializes in presenting the work of photojournalists from around the world.

The work is a series of seemingly simple, straightforward black-and-white portraits of health workers all toiling in a treatment center out in the bush country of Liberia, a five-hour drive from that nation’s capital, Monrovia.

The photographer Daniel Berehulak is a relatively young but very experienced Australian photojournalist who has traveled to 40 countries to cover stories such as the trial of Saddam Hussein in Iraq and elections in Afghanistan and whose work has appeared in major publications such as The New York Times, The Wall Street Journal and Time magazine. In 2010 he was nominated for a Pulitzer Prize for coverage of the floods in Pakistan.

In an interview with The Paper at the crowded Second Saturday exhibit opening, Berehulak explained a little about how he came to photograph the health workers, who range from medical doctors specializing in infectious diseases to gravediggers who have had to bury family and friends, among others.

He said he had spent about six weeks covering the response to the Ebola outbreak and was struggling with relating what he encountered beyond the sense of crisis and misery. “I was finding it difficult to move the story forward.” At first he hit upon an ambitious project to make portraits of all sorts of people around the world involved in the Ebola campaign, including Americans in Atlanta, Georgia, at the Center for Disease Control. But his editor at Getty Images Reportage wanted to limit his scope to his location at the Bong County Treatment Facility in Suakoko, Liberia.

Wanting to make the pictures special for the participants and anxious the subjects would be reluctant to cooperate, he labored to create a makeshift but welcoming environment for the photo shooting. He put up a small tent, hung queen-size sheets he purchased after driving all the way into Monrovia, where he also acquired giant floodlights in a hardware store. “There are no photography studios in Monrovia,” he said. 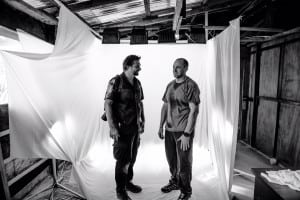 Photographer Daniel Berehulak, left, with one of his health worker subjects in makeshift studio

His fear about cooperation stemmed from the great social stigma attached to involvement with Ebola. Many of the health workers had never told their families what they were doing. But he said, “I was literally astonished by the response. Everyone wanted their picture taken.”

Over the course of taking as many as 60 portraits, Berehulak said he spent an hour or more with subjects listening to their personal stories of how they got to the treatment center, and why they do the work. “It was a very humbling experience to have all these people opening up. Everyone had their personal journey.”

He said regretfully he did not have the opportunity to record the interviews. “Out there I am working nimbly. I carry as little equipment as possible to be less conspicuous.” Very brief, nevertheless moving, biographical statements appear as captions for the portraits.

Berehulak said what most impressed him about the experience of covering the story was witnessing the interrelationship of roles played. “Every person, from the gravedigger to the person who did sanitation … to the doctors, the nurses, played such an integral role.” He said it was clear that without that cooperation the facility would easily fall apart. “The biggest thing is the safety of the health workers, because if you don’t have an Ebola treatment facility that gives confidence to the health workers to give the best care, it can even breed the virus and further infect people.”

In an age when digital technology allows everyone to be a photographer and the camera is often pointed at ourselves, an exhibit of a serious artist’s work representing real-world tragedy and extraordinary heroism might be well worth the trouble of a visit as a way to recalibrate perception.