Like connective tissue, a whole string of new Beacon businesses, prompted perhaps by the opening of the Towne Crier Café a year and a half ago, have opened up not on the east end of Main, nor the west, but at points between.

The latest, opening its doors on a frosty Valentine’s Day, is More Good, which, along with its selection of hand-crafted, healthy soda syrup concentrates, bitters, cocktail ingredients, bar accouterments, herbs, spices and teas, is also a meeting place of sorts. A communal table, intended to serve as a community resource for meetings, or just a stop-in for a pot of tea, is open to all, whether purchases are made or not. The large storefront also holds a commercial kitchen prep area, used not only by More Good but other food startups. 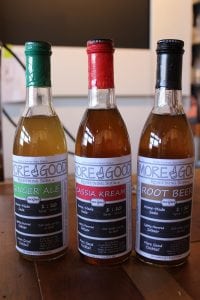 There’s a newly built bar with seating on the premises, too, though no alcoholic beverages are served. That bar hearkens back to More Good’s beginnings, as the germination of this and More Good’s line of syrups, which it has been wholesaling for a couple of years, began with owner Jason Schuler’s stint behind the bar at Gleason’s in Peekskill not so long ago.

A 20-year veteran of the bar and restaurant business — his first job was as a busboy, Schuler, who grew up in Hopewell Junction, said he “worked in bars and restaurants my whole life, trying to figure out what I would do with my life; meanwhile I was in training and didn’t know it — I get enjoyment seeing other people enjoying themselves.”

Schuler cut his teeth in the cocktail industry during a stretch living in L.A., where he said he “learned the history and culture of mixology, and how to make great cocktails with real ingredients — the art form of what cocktails used to be.”

On returning to this area, he wound up at Gleason’s, which he enjoyed because “it was far enough away from New York City that I was able to educate people. They’d ask questions and engage in dialogue about how things were made; there was a genuine interest.”

While at Gleasons, Schuler fine-tuned his syrup making, and in December 2012 he was asked by a regular if he could make 12 bottles of his syrup for purchase as Christmas gifts for friends and family. “I said yes. It was a lightbulb moment. That night, I pitched my idea to a friend, and with a $2,000 investment I started my business, taking orders from behind the bar, and it took off from there.”

The core of the business is the soda syrups, which can be used as a cocktail ingredient, seltzer flavoring or as a healthy soda-like substitute. All of the spices used are crushed by mortar and pestle and are organic. There are currently three flavors, Cassia Kream, Ginger Ale and Root Beer, with two “testers” — lemon/lime and orange — likely to appear soon. 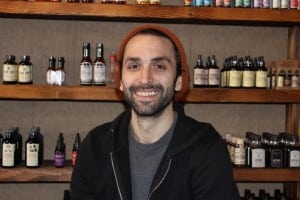 Schuler’s concept of the business has included one stipulation from the start: “The company has to have a huge philanthropic component. The bottom line is that we want to help take care of the community and the planet.”

Determining that a charity focused on water would fit in best with what More Good was creating, Schuler started researching and found generosity.org, a nonprofit dedicated to ending the clean water crisis in developing countries, one community at a time.

“Over a billion people don’t have access to clean water,” Schuler said. “We reached out to them and made a promise to donate at least $4,000 a year to them plus 10 percent of our net profit. In our first year we raised over $6,000, and then last year we decided on a one-day fundraising event, where we raised $17,000 in 24 hours through the community; we provided a platform for people to do inherently what they want to do.”

Lately the business has escalated after Whole Foods decided to stock More Good products. “We started with Whole Foods last June, with just one store, in Albany. Then we got their flagship store in Brooklyn in July, all seven Manhattan stores in November, and we’ll be supplying the whole Northeast from March onwards. So in less than a year we’ve gone from one to 32 Whole Foods stores,” Schuler explained. 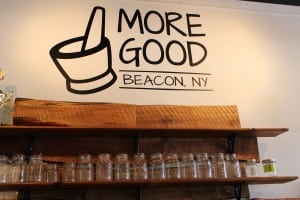 Inside the new More Good store.

During More Good’s first year, they opened up a “tester” 200-square-foot retail store across from Homespun further west along Main Street. Initially a spice station, they added in bar supplies and quickly outgrew that space. The larger space was needed for more production room, of which they have an ample supply now, with a large portion of the new space devoted to the kitchen and dry storage area, which is open to view on one side.

The kitchen serves not only More Good, but other local food businesses, including Cold Spring retailer/wholesaler Go-Go Pops. Schuler, who said there is a “need for a community commercial kitchen,” envisions it as a “full incubation services kitchen, a place for getting ideas to market. We will offer really reasonable hourly rates, which will make it accessible to very small food businesses just starting out or expanding.”

Schuler said he chose Beacon as his base of operations after initially considering Brooklyn. He’s glad that he did: “It’s a cool, vibrant community, and we’re happy to be here.”

The new space was empty, and More Good was able to design it to their own specifications and construct much of their furnishings with reclaimed, donated wood and other materials, examples being the bar, which is made from old doors that were once used by a friary near Peekskill, and the checkout table, which in its earlier life performed that same duty at the now-closed Nichols Hardware. That one of the More Good business partners is an industrial designer is evident through the stylish, warm, wood-filled interior.

The demands of attention to the wholesaling end of things has meant a delayed opening of this new space, for which a lease was signed in October 2013 with an earlier opening anticipated. “Wholesaling has taken so much time, and we had to sacrifice an earlier opening to continue growing at the pace we’ve been at,” Schuler explained.

Aside from their own line of soda syrups, all of the other products are retail. Among these are over 50 varieties of bitters, which Schuler described as being “what salt and pepper are to a chef, bitters are to a drink — they accentuate.”

Other cocktail-associated products like mixers, boxed water, stuffed olives and maraschino cherries line the shelves in one corner, while a wide sampling of organic, fair-trade herbs and spices — “all of the highest grade possible” — are adjacent, along with an assortment of tea leaves. A line of More Good–blended teas is planned for the future. There are also bar- and food-related books available for sale.

More Good is located at 383 Main St. in Beacon and is open seven days a week, Wednesday through Monday from 10 a.m. to 8 p.m. and Tuesday from 10 a.m. to 3 p.m. For more information, visit drinkmoregood.com or their Facebook page.