Decked out in their brand new dazzling purple uniforms courtesy of their sponsor Angelina’s Pizza, the Philipstown major softball team put on an impressive display of control, patience, reflexes and speed in their season opening 14-4 road victory over Fishkill. Fishkill quickly jumped out to 1-0 lead in the first inning. 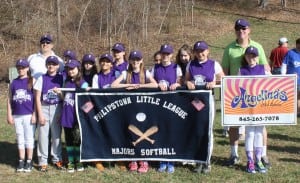 The lead, however, was short-lived when Philipstown began dominating in the second inning. Philipstown’s starting pitcher Maria Barry tossed three strong innings, and Mary Mikalsen closed out the fourth and final inning with three sizzling strikeouts. Barry notched two strikeouts and was supported by a stellar defense. Barry and Mikalsen gave up no walks.

Philipstown displayed tremendous speed and stole bases at will, including home several times with hard slides. All 15 Philipstown players reached base in the game.