The proposed Hudson Highlands Fjord Trail to link Cold Spring and Beacon reached a milestone Wednesday night (April 29) with the debut of a draft master plan for the route of the pedestrian-cycling path.

But as a figurative milestone the draft plan might be Milestone 1 on a 9-mile route, with much of the nitty-gritty detail work still to come.

The master plan was presented at the Chalet on the Hudson, north of Cold Spring and south of Beacon, in the fourth of a series of public meetings held since February 2014 on plans to connect the train stations in those municipalities via a path paralleling the Hudson River, the Metro-North railroad tracks and Route 9D, a twisting, two-lane state highway. The trail effort is led by a coalition of governmental and nonprofit environmental organizations, supported in part by private donors.

Creating a trail for those on foot or bicycle to use while avoiding trains, cars and falling into the Hudson is a complex big-bucks venture — perhaps $50 million total, start to finish — as made clear Wednesday by Amy Kacala, planner for Scenic Hudson, and Jackson Wandres, director of landscape architecture and urban planning at the RBA Group, the consulting firm assisting with the trail.

From Cold Spring, the trail would follow Fair Street to Little Stony Point, using a new sidewalk slated for construction this year. “Little Stony Point is becoming more and more of a popular destination,” Wandres observed.

Directly across from Little Stony Point, an improved parking area would better serve at least some of the vehicles that now park helter-skelter in the bushes and along the narrow verge of 9D between Little Stony Point and Breakneck Ridge a bit farther north. At the parking lot, clearing of trees began this spring, in advance of the arrival of a swarm of important visitors, migratory bats. To slow traffic and enhance safety, the intersection of 9D and Fair Street would be reconfigured, forcing drivers “to make a proper right turn,” as Wandres put it, and not veer off 9D and career down Fair Street into Cold Spring, as they often do now. 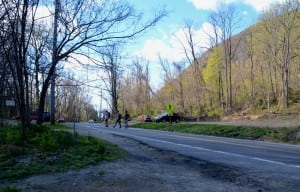 Between Little Stony Point and Breakneck, the master plan calls for bringing the trail close to the water, as a shoreline path, keeping it away from both the railroad tracks and Route 9D. However, as Wandres noted, proximity to the Hudson will probably entail installation of an 8-foot fence along the river, to prevent accidents. In general, the shoreline path “is a complicated piece … some of it might be in the water. We really need to take a closer look at the engineering and get a firmer idea of what is feasible [and] how much land” it requires, he said.

As shown in the master plan, from Breakneck Ridge to the Breakneck train stop, the path would be elevated above the train tracks and border 9D, again with a nonintrusive fence in places for safety.

According to the master plan, expected to be available on the Internet soon, the trail would accommodate two forms of cyclists: recreational riders, who would use the pathway, alongside pedestrians; and serious athletes on “bikeable shoulders” or bike lanes at the edge of Route 9D itself. “You don’t want to get” speed-conscious, competitive cyclists “terrorizing the families” and other walkers on the pedestrian path, Wandres explained. 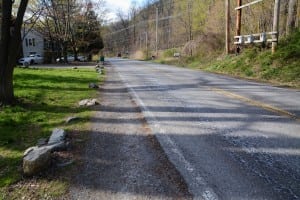 Cold Spring’s Fair Street is scheduled to get a sidewalk extending to Little Stony Point this year, so pedestrians need no longer walk on the road. (Photo by L.S. Armstrong)

On the outskirts of Beacon, the route must cross Fishkill Creek and with sensitive wetlands, private property, a utility easement and numerous logistical questions in play, details remain unfinalized, Wandres said.

However “once you cross Fishkill Creek, it’s smooth sailing from there,” with connections to existing trails and two Scenic Hudson holdings, Madam Brett Park and Long Dock Park, Kacala said.

“Until we get through the environmental review, we can’t really move forward,” Kacala said.

As in the past, members of the public questioned the persistence of a 55-mile-an-hour speed limit along 9D, with its nearly nonexistent shoulders and hordes of hikers, including groups of children, trudging along them on weekends. “The most wonderful thing you could do for safety” is reduce the speed limit, one woman told Wandres.

He said the state is aware of the concern — hence the talk of a traffic study, which could well result in a reduced speed limit. “So stay tuned,” he advised.

Emergency services personnel urged adequate parking for their vehicles near Breakneck during rescues and other crises, and as the meeting ended Philipstown Town Board Member Nancy Montgomery thanked them for considering aspects of the trail from an emergency response perspective. (At least one representative of the Cold Spring Fire Company attended the meeting.)