May 1 and only a couple more weeks until we’ve passed the final frost date when the danger of losing plants to a cold snap should be over. Phew, finally! Three cheers for May 15. I’m working on my annual planting map for the garden now, a guide to moving plant families around to avoid putting them in the same place they were in last year.

I use raised beds, but even if you don’t, it’s best to rotate your crops on a three-year schedule. Vegetables are grouped by their genetic characteristics and share similarities. Those similarities mean that they can be attacked by the same pests and pathogens and also that they will use nutrients from the soil in similar ways. Some plant families are heavy feeders and use the soil nutrients faster, for example.

One of the most commonly planted families in home vegetable gardens is the Solanaceae or nightshade family. It includes all peppers, tomatoes, potatoes and eggplant. Cabbage, cauliflower, kale, Brussels sprouts and broccoli are some of the commonly planted cruciferous vegetables in the Brassicaceae family.

Cucurbitaceae include cucumbers, squash, melons and gourds. Fabaceae includes all of the legumes, such as peas and beans. Liliaceae include all of the alliums, like onions, shallots, garlic and asparagus. Chenopodiaceae or the goosefoot family covers spinach, beets and chard. Apiaceae are all of the carrot family, including parsnips, celery, dill and fennel, among others.

Farmers rotate crops to increase yield, improve soil health, and to disrupt any pests or pathogens that are left in the soil from the previous year. When the pests emerge but don’t have their host plant available, they die off. In a home garden, it doesn’t seem as important, but it is, especially if you’re growing organically or want to minimize the pesticides and fertilizer needed. Crop rotation is a good practice for a low maintenance, healthy environment.

Basically, you want to make sure that you don’t plant the same family of vegetables in the same place for three years. This gives the soil time to recover and kills off anything that could weaken or damage your plants. 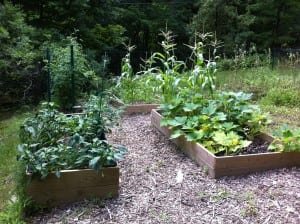 Start out by drawing a diagram of your garden. Depending on how big it is and how ambitious your plans are, your plan could be simple or a little complicated. If most of your garden space is taken up by only a few vegetables in the same family, consider trying something new from a different family, instead. Even using a cover crop like clover, alfalfa or daikon radishes will add nitrogen and break up compacted soil in one season and give you richer soil to start with the next year. Plant some of your favorites in containers for one season and give the soil a chance to recover if necessary.

Studies at Penn State College of Agriculture demonstrated significantly higher yields of 15 to 20 percent when commercial fields were rotated between corn and soybeans, with the gains increasing each consecutive year of rotation with a cover crop in between. The research also demonstrated that fertilizer wasn’t necessary and fewer pesticides were needed.

Whether you’ve had a garden for years or are just starting out, map out where every vegetable is planted or will be planted. For ease of rotating, keep vegetable families clustered together. Tomatoes, peppers and eggplant can be planted in the same raised bed, for instance. If the families are mixed, it’s harder, if not impossible, to rotate them. However you spatially think of your garden, create sections grouping by rows or beds.

Choosing an orderly direction — clockwise, east to west, left to right — ensures that you have a system organizing your garden and will remember it from year to year. In a garden notebook, draw out your garden from the previous year. If you didn’t cluster by family, don’t worry; starting now is better than not doing it at all.

If you have a lot of vegetables and a large garden, cut out pieces of paper as labels that can be moved around your map, easier than erasing, trust me. Creating a three-year rotation plan from the get-go will be more straightforward than starting over every year. Just keep it in a file where you know where to find it again next May.

I’ve only covered vegetables here, but herb gardens and fruit can benefit from a similar rotation. Understanding how plants are grouped together in families, whether they’re ornamental or edible, can make your gardening more effective and less work.