May 31 concert of choral music, spirituals and cabaret songs

Singers from the New York chorus New Amsterdam Singers, founded in 1968 by Music Director Clara Longstreth, will present a diverse and tuneful program of vocal music on Sunday, May 31, at the Chapel Restoration in Cold Spring. The concert at 4 p.m. is free and open to all.

In its third appearance at the Chapel, the group will perform musical settings by Paul Hindemith and Morton Lauridsen of poems by Rilke, James Agee and Robert Graves; choruses from the opera Tess by Matthew Harris with text by Thomas Hardy, a new work by Ben Moore based on letters of Vincent van Gogh, spirituals and songs of the cabaret. 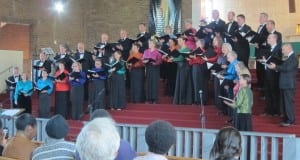 The New Amsterdam Singers have performed with the New York Philharmonic under Leonard Bernstein, at Alice Tully Hall as a guest of Clarion Concerts and with the American-Russian Youth Orchestra under Leon Botstein at Tanglewood and Carnegie Hall. Under Longstreth’s direction the chorus has sung at the Irakleion Festival in Greece; the Granada Festival in Spain; the International Choral Festival at Miedzyzdroje, Poland; the Festival of the Algarve in Portugal; Les Chorégies d’Orange in France; and the Llangollen International Musical Eisteddfod in Wales and in concert in Europe and Latin America.

The Chapel Restoration, at 45 Market St. in Cold Spring, is across from Metro-North Station, where free parking is available on weekends.

Photos courtesy of the Chapel Restoration