Craftsmanship in design and construction

Tom Ptacek feels some people have an aptitude for “making stuff.”

“We’re born that way, and there’s a type of intelligence we have in which things like thinking three-dimensionally come much more easily; you envision it and you bring it out — it becomes what you thought it would be.”

Ptacek, a master homebuilder who has a sideline business in furniture and homeware design, doesn’t always follow “the standards,” and that is intentional. “We come up with solutions for building problems; we make little inventions every day, solving and understanding the materials — particularly wood — the give of it, the contraction.” 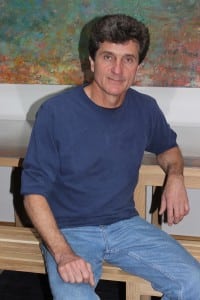 Tom Ptacek (Photo by A. Rooney)

Bringing craftsmanship into contemporary design is a hallmark of both Ptacek’s general contracting business, which he has operated for over 25 years, and his much newer venture into furniture and home accessories design.

Ptacek, who grew up in the Milwaukee suburbs, one of nine children, calls himself “self-taught, but ‘society-taught.’” He explained: “My grandfather was a builder, but he was too old for me to observe. As a child I made stuff constantly: a lot of crafts, paintings, drawings … I fixed bicycle frames, built a kayak — an endless series of projects. I remember making a large Pabst can out of papier-mâché, which won best in show when I was in seventh grade. With that size family, if you wanted to do something, you had to figure out a way to pay for it.”

Although Ptacek studied wildlife ecology at the University of Wisconsin, he continued with art classes and, after graduating, went to art school simply to explore, not to earn another degree. Coming east to attend the Rhode Island School of Design one summer, he began working as a carpenter to support himself. Taking to it, he then headed north to the Nova Scotia College of Art and Design, where, for the first time, he met — and learned from — local woodsmen and craftsmen.

Moving to a pre-hipster Williamsburg, Brooklyn, “I immediately had to pay a city rent,” he related, “so I started making stuff like cabinetry right away, with my older brother. We answered ‘We can do that’ to basically any request, whether we knew how to or not! At that point we were just doing strictly what people wanted; I didn’t have ‘a style’ back then. It was usually driven by an architect, the owner or a designer — I just suggested materials … We did theater sets, apartment renovations, anything.” 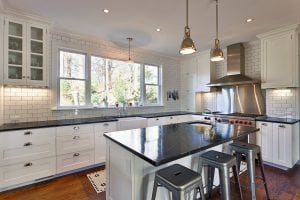 Ptacek said he has some regrets over not ever having worked under a master craftsman. “I learned a lot through the school of hard knocks, and I probably could have fast-tracked if I had gone about it a different way. But I used to be too cocky to be an apprentice; now I’m more humble and I would be receptive to it.”

Currently, Ptacek enjoys keeping up with the pace of new technology. “Although I work for clients in many different styles, I’m never a believer in ‘old world is the only way,” he said. “It’s not my goal. I like working with the newest finishes, with different ways of cutting wood, and there’s nothing wrong with being up to speed on the latest techniques.” 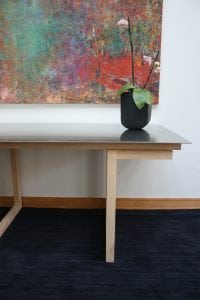 Ptacek’s contracting and design work, based in Garrison, has taken him all over the New York metropolitan region, from Westchester to the Catskills, where a recent large-scale project, completely in the contemporary vein, just wrapped after a year and a half. Ptacek has also worked locally — he was the general contractor on the Manitou School, extensively renovating the old National Register of Historic Places–listed Plumbush Inn, built in 1867.

A natural forager for materials to reuse, refurbish and create with, Ptacek Homes has its own tree-milling and molding equipment. With each project, Ptacek directs the job, working with his crew. He described his role as “soup to nuts, which includes the finishes and the interiors but also things like putting in boilers, HVAC, glassware, and I add the craftsmanship that goes along with the project — why not be a builder and direct all that? I like being the lead guy who sees the whole project come together. It’s satisfying; there’s immediate gratification in the form of oohs and ahs. It’s interesting, in interviews and polls of ‘happy careers,’ there’s a lot of contentment in my business.”

Ptacek is cognizant of the responsibility of passing along his expertise to the next generation. “With the guys I work with, I automatically teach them, plus I usually have summer interns, too. I stress that none of us, including me, should shy away from the heavy lifting part of things. We all do it, and then all get to do something interesting as well,” he explained.

Ptacek Home’s expansion into furniture was driven by the stalled economy of not too long ago. “The phone wasn’t ringing much in 2008, ’09, and I thought, ‘Why not make something you like and see how it goes?’” he said. “It’s a recent passion, my own expression and outlet.” 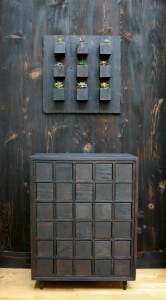 The furniture line consists of large and small pieces, including bedroom sets, credenzas, desks, benches, stand-alone cabinets (including a nifty wine-storage unit with pullout drawers for each bottle), countertops, built-ins and both individual and multipart planters.

Ptacek came to this on his own. “I wasn’t steeped in the history of furniture — I was more into architecture. I started out as a naïf in furniture making, then began looking at it a lot and feeling drawn to contemporary furniture, and I would say my style is inspired by international modernism and mid-century modernism. I don’t feel as if certain styles are the only styles that can be done. I respect those who do any particular style well, not which style it is.”

Recently an exhibitor at the Architectural Digest Home Design Show and the International Contemporary Furniture Fair, Ptacek Home is gearing up to focus on marketing the furniture line more in the near future.

Ptacek Homes’ designs, in the form of handmade display tables and planters, will be part of the Made in Philipstown event taking place over Labor Day weekend; he will likely be teaching a workshop in conjunction with it as well.

For more information and images of the interior and furniture designs, visit ptacekhome.com or the Facebook page, or phone 845-424-6112.