Resuming its program of stand-up comedy, Arts on the Lake presents comics Chris Lamberth, Regina DeCicco and Adam Oliensis on Saturday, June 6, at 8 p.m., at the Lake Carmel Arts Center, 640 Route 52 in Kent. 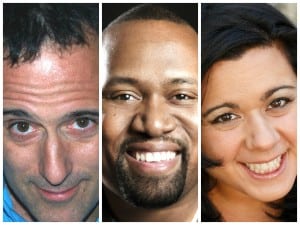 Ladies of Laughter winner DeCicco was scheduled for an appearance at the Lake Carmel Center in January, but a snowstorm forced a rescheduling. She has “wowed” the Laughing Skull (Atlanta) and Women in Comedy (Boston) festivals. Prior to entering the world of stand-up, DeCicco spent five years picking up pointers in the design department of Saturday Night Live.

Recent winner of the Paramount Stand-up Star Search, Oliensis has also co-authored the movie The Pompatus of Love; appeared on Broadway, off Broadway, in movies and hundreds of TV and radio commercials; and is the organizer of Lo-Hud Comedy.

Tickets for Comedy Night are $15 with a $3 discount for AotL members. Anyone can become a member in advance on the web or at any event. As past Comedy Nights have sold out, Arts on the Lake recommends advance ticket purchase at artsonthelake.org or 845-228-2685.

Photos courtesy of Arts on the Lake