Dialogue aims to improve relations between police and community

There were over a hundred people at the VFW Hall on Beacon’s Main Street last Sunday, May 31, representing a diverse cross-section of the city’s population. They had come together to take part in a workshop entitled “Beacon Speaks Out” that sought to explore the relationship between the citizens and police officers of Beacon. But what was most notable about the attendees was who wasn’t there.

Neither Beacon Mayor Randy Casale nor any members of the City Council or Police Department were in attendance. As Brooke Simmons of the community group I Am Beacon explained at the beginning of the event, that wasn’t by accident. 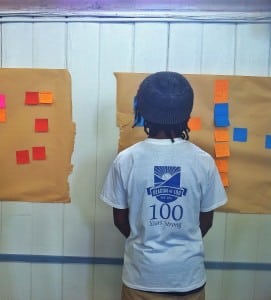 A member of I Am Beacon reads some of the responses from the Beacon Speaks Out workshop. (Photo by B. Cronin)

“They are not here by design,” she announced. “They have agreed to sit this one out so that members of our city can come into a safe environment and feel free to share all of your information, ideas, hopes, dreams and goals, about the positive changes we want to make in Beacon. They’re here in spirit; they’re just not here physically.”

Casale and Beacon’s Chief of Police Douglas Solomon might not have been there, but the event itself wouldn’t have happened without them. The roots of Sunday’s event began back in January 2015 when Casale called together a group of community leaders and members of the clergy to discuss the national increase in tensions between police departments and communities — and how to insure that the same thing doesn’t happen in Beacon.

“Obviously with everything that happened last year with Michael Brown and Tamir Rice and Eric Garner and on and on, this has been on people’s minds,” said Rabbi Brent Spodek of the Beacon Hebrew Alliance, referring to recent cases in Ferguson, Missouri, Cleveland and Staten Island, in which unarmed African-American men died at the hands of local police. “That started it. From there it came to Better Together, the Beacon interfaith clergy group, to think about doing something that would bring a lot of different voices into dialogue with each other.”

Over the next few months, Better Together teamed with I Am Beacon to design Beacon Speaks Out: an independent, locally driven community effort aimed at examining and improving police/community relations. Although the group is not answerable to either Casale or Solomon, Spodek told The Paper that the group has their support.

“Chief Solomon has been one of the people urging this to happen,” said Spodek. “I’m concerned that in the rank and file there might be a concern that this program is some sort of attack on the police, which it’s not. Nationally, police are feeling a little bit defensive right now. So I’m eager to figure out how to build trust within the rank and file who are understandably skeptical but whose voices need to be part of this conversation.”

Spodek and Simmons described Beacon Speaks Out as a four-part initiative that will continue into the fall. Sunday’s meeting was the first step and involved attendees interviewing each other one-on-one about their experiences regarding the Beacon police. The points raised in each private interview were then written out on Post-it notes and stuck on long sheets of butcher paper encircling the room. Once all of the notes were posted, attendees were asked to walk around the room, read everyone’s notes and begin clustering similar notes together.

“We set it up so that all voices would be heard,” said Spodek afterward. “Not just the loudest, and not just whoever grabs the mic first.”

Volunteers will condense all of the notes to reflect a series of broad ambitions. These will be presented to the public at a July City Council meeting as Step 2.

Step 3 will involve community members and members of the Beacon Police Department coming together to discuss how those broad ambitions can be translated into specific action steps. They’ll present those in the fall in a public meeting as part of Step 4. At that point, Beacon Speaks Out will ask the City Council and the Police Department to commit to pursuing these action steps.

Those who missed the workshop last Sunday but would still like to take part will have additional opportunities. The group will be setting up tables at the basketball courts on the corner of Wolcott and South Avenues, as well as at Hudson River HealthCare at 6 Henry St., over the next few weeks. Beacon citizens can also participate online through June 30 by visiting bit.ly/BSO-eng. Those who wish to take the survey in Spanish can visit bit.ly/BSO-esp.

Organizers of Beacon Speaks Out hope that everyone in Beacon will take the time to share their stories, no matter what format they choose to use in order to participate. As Spodek explained, those stories are integral to the success of the project.

“Everyone’s got a narrative they tell themselves about how things make sense,” he said. “That story is cohesive within someone’s own experience. But then someone else, experiencing the same thing, tells the story in a different way. And a lot of what this effort is, is trying to bring those stories into alignment. To hear what the hopes and dreams and fears and concerns are. And to hopefully hear that from the police as well, so that we can say, ‘How can we do this together?’ ”