For over 10 years, Dia staff has come together on their own to organize an annual art show featuring their own works. This year’s show, Traces, opens at the Howland Cultural Center at 477 Main St. in Beacon with an opening reception on Friday, July 3, from 7:30 to 9:30 p.m.

“I really wanted a venue in which we could have it up for a longer period of time,” explained Joanna Ferrin, who took on the task of organizing the show this year. “In the previous venues, the show was only up for three or four days, but this year the show will be up for a month. But I also wanted a space that we could dance in, and have a nice big opening reception.”

Ferrin chose the theme Traces in order to honor not only the history of Beacon, but the vast cultural history that she and her co-workers get to experience at their day jobs. “I wanted a theme that was really ephemeral and related to what the city of Beacon was about,” she explained. “Beacon is making a comeback, but that comeback is built upon the traces of the past. We are influenced so much by the art that’s around us at work, but also the work that we see from all of the artists in Beacon, and that culminates in the traces we see in our work.” 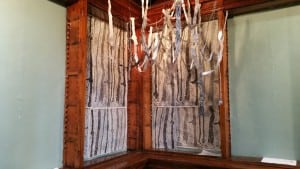 “In Lies the Problem” by Riana Casas, part of the show ”Traces” at the Howland Cultural Center

Those traces of history weave throughout the show in surprising ways. Take the triptych of photos by Jesus Pacquing, for example. The striking black-and-white shots feature female DJs in states of meditative focus and rapture. The cross-faders and turntables may signal the modern age, but their poses and the arrangement recall triptyches of saints that one might stumble upon inside a Renaissance-era church in a back alley in Venice.

Matt Held’s “Float of the Medusa” is a playful takeoff of Théodore Géricault’s “Raft of the Medusa,” only the shipwrecked sailors have been replaced with drunken Vikings surrounded by disgruntled Boy and Girl Scouts, the raft has been switched out for a parade float, and the entire frame is filled with confetti. And the Romantic-like paintings on wreathed woodcuts by Katelyn Stamper look like they could have been taken from an abandoned 18th-century cottage deep in the woods that that has long since been overtaken by nature.

There are traces of the local landscape as well, from the swirling horizons in Claire Lofrese’s work that suggest views of the Hudson River and the Hudson Highlands on a foggy March morning to Kathleen Anderson’s “Main Central Vertical Flow: Hudson River.” In Anderson’s painting, the river is superimposed over a painting of the human spine, with river towns standing in for the primary chakras that flank the spine: Beacon and Newburgh for the solar plexus chakra, New Paltz and Poughkeepsie for the heart chakra, and so on.

Not all of the artwork featured is static. Dan Wolfe will be premiering a new video by his band Breakfast in Fur, who recently played at Beacon’s Riverfest. John Nobile will be presenting both video and canvas works. And the installation by Riana Casas entitled “In Lies the Problem” encourages the viewer to collaborate in the continued creation of the work. A thicket of dangling ropes made out of prints contains lies that Casas has written down. 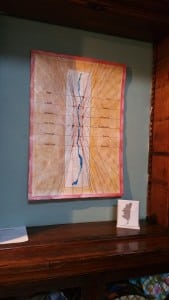 On the walls are new prints in which the viewer is encouraged to write additional lies. Those prints will then be turned into new ropes and added to the instillation. “It represents how we get tangled up in our own lies and that relates to the feeling of vertigo you get as you stand beneath it,” said Ferrin.

Even some of Ferrin’s co-workers who come from an art-history as opposed to a studio-arts background were inspired to create work for the show as well, so that they could participate in the exhibit. Ferrin explains this is fitting, since it’s the show’s deep roots in history that bring it all together.

“No matter what type of medium they’re in or what type of subject they have, they all have a common thread, which is that they’re very rooted in art history,” she said. “I feel like even if we didn’t work together and we just knew each other from town, that connection would still come about — that connection between being an artist and the very fruitful environment we’re in here that allows us to express that.”