Memories may light the corners of our minds, but they also tend to accumulate in the dusty corners of shelves, closets, basements and everywhere else the outdated media they are stored on inhabit. When home movie film reels were succeeded by ¾-inch video tapes, the storage seemed finite, coming as it did towards the beginning of the “an updated version is now available” era.

But those videotapes, which once seemed so accessible and easy to use, are disintegrating, and the players for them are rarely manufactured, and some of the new televisions now being sold lack the capacity to work with VCR machines. Which means that without the transfer of what’s on the videos onto different, more current media, all that’s on them eventually will be lost to time.

It’s that simple: all you need to transfer a VHS tape to a DVD.  Photo by A. Rooney

Luckily, there is equipment, both large- and small-scale, to come to the rescue. And, as of about a month ago, the Desmond-Fish Library (DFL) has such equipment, courtesy of an anonymous donation, and is offering the use of it for free, to library patrons.

As an alternative to the many “pack up a box full of your tapes and slides and mail it off” converter companies, which, while able to handle a variety of media expertly have the inherent risk of parting you from your only copies of very meaningful footage, the converter machine at DFL can handle one tape at a time, and works in real time, meaning you must effectively “babysit” it as it copies. But it basically never leaves your sight, which is a relief to many.

It all works quite simply: for now, the service is offered by the library on Saturdays only. You contact the library to make an appointment in advance, and turn up with the video(s) you wish to copy, plus a DVR-R (not a DVD-RW) disc to copy it onto. Should you have more than 120 minutes’ worth of footage to copy, you need to bring along a second disc as well. And, no matter the length, each videocassette needs its own disc to transfer onto — in other words you cannot bring in two videotapes of 15 minutes each and put them together onto one DVD. 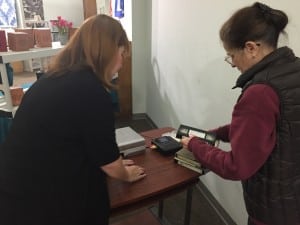 Each appointment is limited to a three-hour maximum time limit. DFL’s Cybrarian, Pam McCluskey, will set you up, get things started, and will provide the simple instructions for monitoring the copying and pushing the right button when it ends. If any difficulties are encountered during the copying, McCluskey can be contacted within the library and she’ll come and help.

There are a few stipulations involved: nothing commercial can be copied, due to copyright regulations; the service is for home movies or home-generated footage only. The library is absolved of any responsibility for tapes which might get damaged in the process. Knowing that videotapes can come in a wide spectrum of conditions, and can be magnetized or moldy, might have been rewound and forwarded excessively, etc., it’s tape at your own risk — though few problems have been encountered thus far.

Nelsonville’s Anne Saunders was taking that risk on a recent Saturday, bringing in several vintage 1985 tapes of her daughter doing ice skating routines. “It’s so funny to see her at 6 years old,” Saunders said, looking at the small monitor which displays what’s on the tape. Memories of a very specific time in life returned as she watched. “From age 5 to 10 she wanted to learn to skate. She’d practice from 6 to 8 a.m. on custom-made skates, three times a week. Eventually her teacher told us that three times was not enough. My daughter asked me ‘Can I stop?’ I rejoiced — she went on to study the flute.”

In addition to converting ¾-inch tapes, the library’s machine can also work with the smaller-sized cassette-style home movie tapes — not the tiny ones, but those which are closer to index card size. However, with these, it is essential to bring the camera which was used to record and also the three-color cord connecting the camera to other equipment. Eventually, DFL hopes to expand its equipment and copying/converting capabilities.

At the moment, in addition to the VHS conversion machine, it also has a record player which can convert LP records to CDs. Donated by DFL Director Jen McCreery, after she received two as presents, this equipment can actually be checked out of the library and used at home. McCreery calls the conversion process user-friendly, and say’s “it’s easy to talk people through it.” DFL is also able to help patrons transfer files from floppy discs to online storage. All services are offered for free. 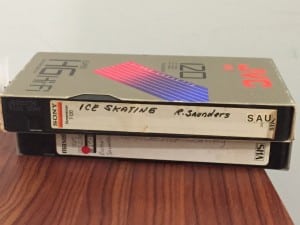 Coming to life again, in a new format: Anne Saunders’videos from 1985.  Photo by A. Rooney

Upgrading files, in one way or another, is something emphasized at library school. “Keeping things current and in universal formats is stressed. I had a professor who used to say ‘the only permanent file is a clay tablet,’” McCreery relates. “We’re looking at the library in terms of services — providing things that you probably don’t have at home.”

Bill Hicks didn’t have the equipment at home to convert some much treasured tapes into DVDs. Along with footage of the first home he moved into in Garrison 20 years and his first dog romping in the outdoors, he was eager to revisit the 50th Birthday Roast — which he calls “an absolute riot” thrown for him by friends on the occasion, and also his appearance on a PBS special about addictions, his being nicotine, at the time. In addition, he was able to once again view his appearance, 35 years ago, as a contestant on The $25,000 Pyramid game show (and no — he did not win the big bucks, but did take home about $800.)

Hicks says he “considered purchasing a transfer machine from Hammacher Schlemmer, but could not persuade myself that the cost, $299, was appropriate. Many Garrison and Cold Spring community members cannot afford to purchase a machine or pay the cost a professional would charge, so it’s quite wonderful that a gift was given to Desmond-Fish to make this service possible. I want the aforementioned to be preserved for viewing by family members much younger than I, those alive and those still to be born.”