The last season of Downton Abbey celebrated at Desmond-Fish

They came dressed for dinner — or, more precisely, for an almost-proper tea. Devotées of Downton Abbey gathered on Sunday evening, Jan. 3, in the appropriately wood-paneled drawing room (well, main reading room) of the Desmond-Fish Library in Garrison to imbibe, ingest, chat, compete and swan about attired in their finest finery. All that was missing was the plot: if there were blackmailers, devious under-butlers, mercenary swains and children of uncertain parentage about the place, they were invisible on this occasion.

For those who may be living in another century or something and are unaware this is the final season (of six) of the revered British drama, it is not for lack of a public relations assault by the producers and PBS. This hugely popular cavalcade of British estate life, the upstairs and downstairs of it, which, in unspooling the lives of the Crawley family and their coterie of cousins, cooks, physicians and even a long-lost Russian prince-turned-refugee (a story for another party) has touched upon some of the tumult affecting England during the period beginning just prior to World War I. It continues for 15 years or so after that; the rest of this season has been shrouded in secrecy, although it has concluded airing in the U.K. 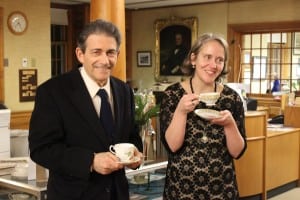 Upon entering the Desmond-Fish, one could spot several ladies sporting hats, flappers, debutantes, aristocratic women with a certain hauteur, and, yes, several who were forthright in their right to dress down. There was the odd man or two, but it was quite obviously a devoted female flock, joined together to enjoy the overabundance of desserts including, of course, scones with clotted cream and strawberry jam provided by Sarina Tamagna-Hawes, president of the Friends of Desmond-Fish Library. (She was wearing a rather magnificent hat — made in England, of course.) Some of the other goodies were provided by Riverview Restaurant and Hudson Hil’s; it was put together by the library’s Karen Thompson.

A simple question posed to some of the party-goers: “Take one plot line and tell what will happen this season, and what should happen?” yielded much thought and, at times, lengthy answers. Anne Osborn, who later took home the trophy (fittingly in the form of a bottle of champagne) for the highest score on the Downton trivia challenge, had this to say: “Mary will find someone she loves again. It’s looking like it is the tall guy who drives cars she met at the shooting — but she will get married. Lady Edith will make something from the newspaper. Wondering if maybe her husband is resurrected from the dead? It’s refreshing that Mary is taking things in hand; it’s hard to make the transition from a medieval, almost feudal way of life to another when there’s a shared mistrust by tenants and landholders.” 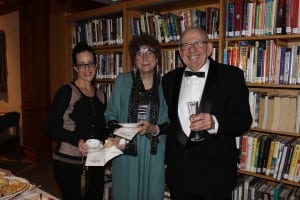 Eugenie Milroy Parrella (triple-barreled name most suitable for the occasion), Sheilah and Bert Rechtschaffer are all Downton fans.

Sheilah Rechtschaffer had some ideas about the “downstairs” denizens: “Baxter will be okay. Daisy will discover women’s lib — it’s just beginning to flourish. All the bad ones will get their comeuppance. For instance, Thomas — well, wait a minute, he’s not really bad because as a gay man he has been forced into a precarious position with such stringent suppression. And Isobel is terrific — she’s rejected two suitors and now she’s like the wonderful unmarried aunt who everyone wishes they had. The farmers will be okay too — they’ll go into organic farming! There’s a breakdown of aristocracy, yes, and now in its place we have celebrity culture.”

Meanwhile, Terri Waivada was most interested in “the story of the son-in-law who goes to the other side of the Atlantic. With his Socialist loyalties he might get involved in politics in Boston.”

Gail Watson had no theories about this season. Perhaps that was because she was so overwhelmed with digesting all that had occurred on the three seasons (the first three) she and her husband Glenn binge-watched recently aboard a Viking Cruise from Amsterdam to Budapest. As any loyal Downton watcher knows, hearing the name Viking Cruises conjures up an image from above of the blue Danube being plied by such a vessel, which appears in a commercial before the start of every episode (Viking being the prime sponsor of the show). 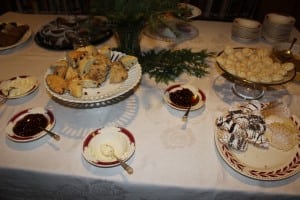 Scones with real clotted cream and jam were a centerpiece of the table of goodies.

As the evening progressed, sweets were eaten, tea was taken, as was the quiz, and awards were given out for Best Costume with a Backstory; Best Accessory (this was given to a painted wooden dog, representing Isis, canine of the manor), Best Flapper; and so on. Just before the magic hour of nine, everyone decamped downstairs to enjoy the first episode of the final season.