A younger person might not be able to identify a roll of film, let alone a movie reel, but could still be curious about the “ancient” technology. An older person might feel nostalgic hearing the familiar click of a reel projector. A biweekly fest of rediscovered 16-millimeter films held every other week at Dogwood, called screen16, hopes to appeal to both sensibilities.

Each screening, which typically lasts from 90 minutes to two hours, features a selection of short films from the collection of organizer John Froats, whose interest in vintage photography led to an enthusiasm for moving images. His collection consists of over 800 obscure movies gathered over a 23-year span. Although the format dates to the 1920s, most of the reels he owns were shot during the 1940s and ’50s and range from commercial films to home movies to educational documentaries meant for classrooms. 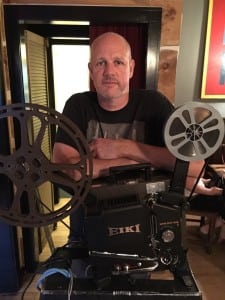 The collector’s interest in film was sparked when he was 11 and borrowed his father’s 8-millimeter camera to make a movie about Earth Day. “I remember the blurry footage of discarded roadside trash I shot out the backseat passenger window of my parents’ Impala,” he said. His father made home movies for a brief period and Froats still has the projector from his childhood.

Although he acquired a large collection of 16-millimeter reels from a private collector as the foundation of his personal library, he is constantly looking to expand his selection using collectors’ websites like eBay and Ruby Lane. He also frequents the Beacon Flea Market and various Cold Spring antique shops.

“If I find something locally, I show it immediately for instant gratification,” he said. Before screenings, he simply rustles around his basement to find something new to share at a screening. The unpredictable selection is part of the fun for Froats, who enjoys having his audience reflect on the various films. “There’s this moment when the film is over and we think about it. It’s like closing a book,” he said. 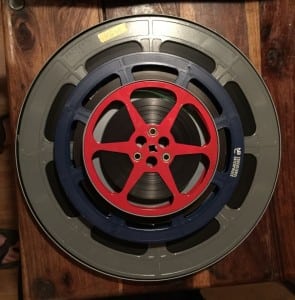 Froats’ enthusiasm for 16-millimeter reels stems from his desire to uncover the beauty in the art. He analyzes the form, content and process of each reel, noting how each long-forgotten filmmaker used the elements. His goal is to give the audience an opportunity to analyze the films with him. “I want to educate, illuminate and initiate a dialogue between viewers,” said Froats.

Before screenings, Froats runs a reel to check for major flaws and breaks and then cleans the roll with a cotton ball and film cleaner. It’s clear he has a purist mindset about the sometimes-unpolished footage: He attempts to show every film the way it was originally intended, embracing each unique scratch and “pop.” “I’m not interested in the Polaroid effect,” Froats said. “I’m interested in the Polaroid.”

Dogwood owner George Mansfield says he appreciates the program as an unusual form of entertainment to bring people together in what is already an unconventional setting. Mansfield does not have televisions in his bar and instead stresses conversation and live entertainment. He is a fan of screen16, he says, in part because the short films allow for breaks for attendees to get up, say hello to one another, and maybe grab a drink. “It complements the goal of Dogwood by providing creative, not numbing, distractions,” he said. 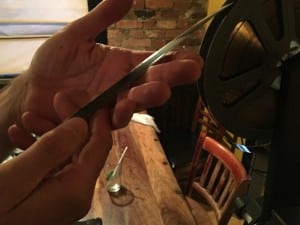 On Sunday, Jan. 10, Froats’ bimonthly screening started off with two of a number of films he owns by a company called Weston Woods that created animated shorts based on popular children’s books.This session’s selections were The Caterpillar and the Polliwog and Goodnight Gorilla. Then came a slapstick comedy called Phoney Cronies that was reminiscent of The Three Stooges.

Next the audience was given an intimate look at the life of a toddler and his family through an anonymous home movie. Finally, the show wrapped up with two educational films: one about the geography and economy of Canada and the other about agriculture in America. The broad range of Sunday’s films offered unique form, content and process for all to reflect on.

The program typically occurs every other week, although due to scheduling conflicts the next screen16 is scheduled for 4 p.m. on Sunday, Feb. 14. Froats maintains a public Facebook group. Dogwood is located at 47 East Main St. in Beacon.