“I think awareness — of both the similarities and differences between cultures — is essential if we genuinely want to cooperate and coexist.” So says Nathanael Shelley, a cultural historian of the Near East and Antiquity at Columbia University, in reference to Muslim Journeys, a reading and discussion group he will lead at the Desmond-Fish Library in Garrison.

The free six-part series, which begins with an introductory session at 6:30 p.m. on Thursday, Feb. 18 and continues through April 14, is funded by a grant from the private, nonprofit New York Council for the Humanities (NYCH).

Shelley, a postdoctoral researcher at the Institute for Culture, Religion, and Public Life at Columbia, specializes in identity concepts and perceptions of social difference in history, including ideas of ethnicity, race, and alterity (the state of being other or different).

His work at Columbia primarily concerns a project called Shared Sacred Sites that “looks at places in the world where different faith communities have managed to share collaboratively or coincidentally sanctuaries and sites without hostility or violence,” he explained. “It’s especially important in America’s current political environment to look at and discuss situations where difference does not automatically lead to conflict and misunderstanding. Working with non-scholars is just as important as working with experts in this regard, and an interested public is a rare opportunity that I don’t want to miss.”

Each week, participants will read an assigned book that explores personal and political transformations in the Muslim world. The titles are Persepolis by Marjane Satrapi, In the Country of Men by Hisham Matar, Minaret by Leila Aboulela, Snow by Orhan Pamuk, Broken Verses: A Novel by Kamila Shamsie and House of Stone: A Memoir by Anthony Shadid. 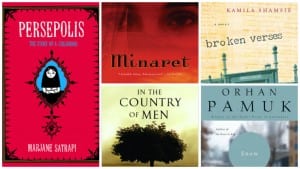 A selection of the books that will be discussed during the series.

Shelley chose the titles from a list compiled by the NYCH. “I am most interested in the way the personal struggles or journeys change an individual’s perception of themselves as well as of culture or the world in which they live,” he said. “These books aren’t about Islam, but they are about individuals who move through Muslim worlds.”

Desmond-Fish Library Director Jen McCreery said she was drawn to the topic from many offered by the Council because “I’ve been looking for good sources of information about Islam and Muslim culture to share with our patrons and hopefully address some of their questions and fears in the wake of recent attacks associated with ISIS and violent extremism and concerns about the upswing in anti-Muslim rhetoric that’s followed.”

She added: “We have a few books in our collection about the Islamic faith, art and architecture, but the works we chose for this discussion group all tell personal stories which allow readers to explore the Muslim world from a variety of perspectives and to empathize with our shared human experiences.”

The only vaguely similar group the library has offered in recent years was the Great Decisions group sponsored by the Friends of Desmond-Fish in which participants read and discussed articles on current affairs. Aside from having a scholar as facilitator, this series takes a different approach. In each of the NYCH’s programs, participants read a series of thematically linked but varied texts, which can include novels, poems, speeches and essays; works of history, philosophy, religion, and criticism. 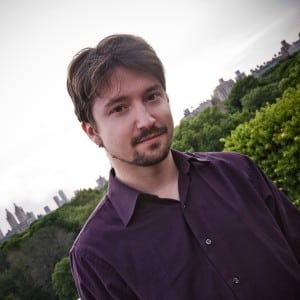 Each series is organized around a significant humanities theme or important historical commemoration. “With its thematic focus, this reading and discussion program offers an unusual twist on the standard book group format by making time for thinking deeply about one idea, over time, from a variety of perspectives,” explained Sara Ogger, executive director of the NYCH.

McCreery found Shelley (the NYCH does not supply the facilitator) after discussing the need for a program like this with library patrons Sheilah and Bert Rechtschaffer, who referred her to their daughter, who works in the Middle Eastern, South Asian and African Studies Department at Columbia. She put McCreery in touch with Shelley, who received his PhD in September 2015 and has taught various courses in Islamic Civilization as a teaching assistant.

“Enrollment in those classes has increased steadily every year, so the response to the Muslim Journeys program [quite a few people have already signed up] is not surprising,” he said. “I’m always thrilled to have an opportunity to work with interested readers, so it should be fun.”

Registration for the series is required; call the library at 845-424-3020. Copies of the books, which were gathered from the NYCH and other Mid-Hudson libraries, will be available at the front desk starting Feb. 18 and must be returned at the conclusion of the program.